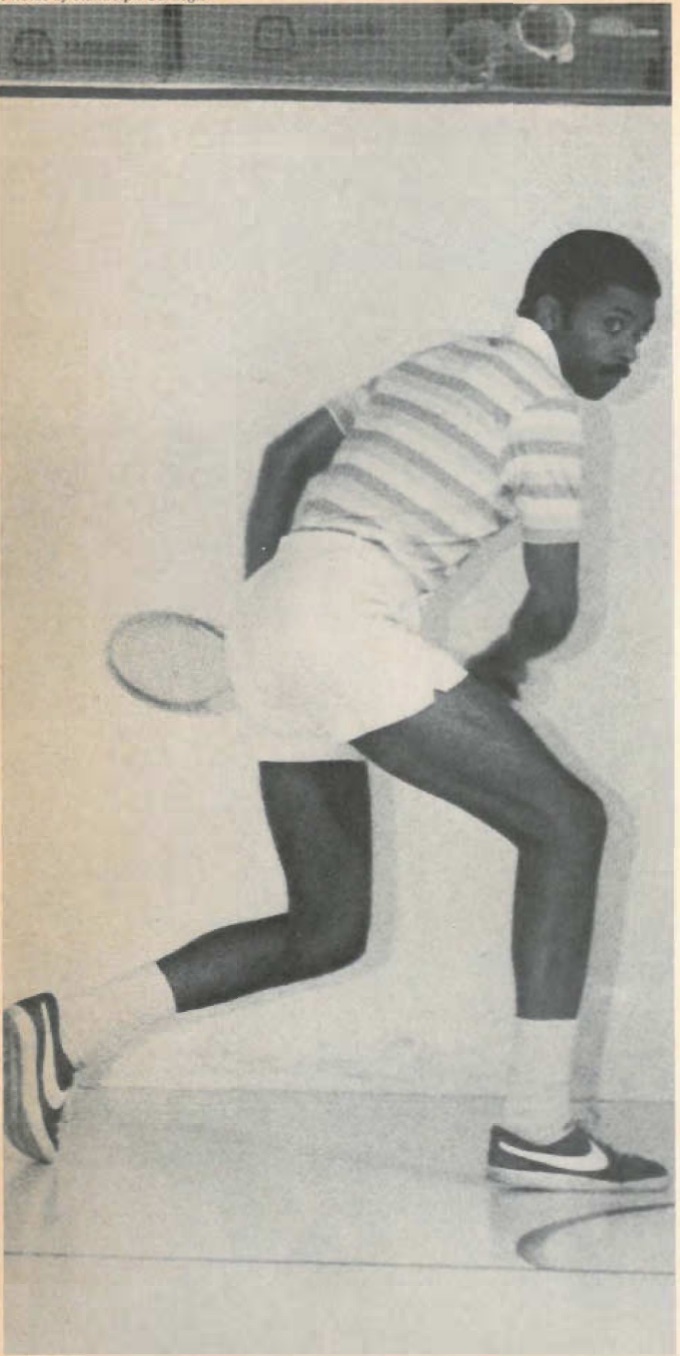 Zap! Pow! Zing! Swoosh! The perspiration pours from your body as you score yet another point. You need just one more to win. Surrounded by four white walls, you stand with at least one foot on the floor inside the line around the service box. You quickly take a deep breath. You serve. Smash! The small green rubber ball flies rapidly through the air, with accelerating speed toward the front wall. Almost instantly it returns with a bounce. Your opponent zips behind you and strikes a crushing blow to the ball. It batters off the side walls. The towel around your neck is drenched with sweat. Your hand, wrapped around the small, long-handled racket, begins to tighten as the ball moves rapidly toward you. The tension rises. Without blocking his view, you jump to the frontside of your opponent and “zap” the ball to the back wall. It bounces and soars to the front wall again. Your opponent tries in vain to reach out and strike the ball with his racket, but fails. You have just won your third game and thus, you win the match. The name of the game? SQUASH!

Although Squash originated in London, England in the 19th century and was introduced in the United States in the 1890s, it has only recently captured the hearts of Americans as the most exciting and fastest indoor sport ever.

Combining some of the elements of both tennis and handball, Squash-an aggressive game with fast wrist action and delicate touch-is played by two or four people (singles or doubles). with badminton-styled rackets and one ball, in a four-walled court.

The Game? A shot must strike the front wall between two red lines before hitting the floor. It may hit the side walls or back wall before reaching the front wall. The ball must be struck before it has bounced twice, but it may be struck on the volley. If your ball reaches the back wall on the fly, you may hit it after it has bounced on the floor. Because of the size of the court, it is important that your opponent(s) have complete view of the court and you must somehow manage to stay out of his or her way.

As a player, you must be completely alert and ready at all times to move into position to hit the ball. If you are slow, the ball will fly past you (or will have bounced twice), and its speed will force you to make a weak return. OBJECTIVE: Return the ball so quickly that your opponent is caught unaware and can’t make a proper, well-placed return.

Proficiency at Squash requires you to practice at least one-half hour to one hour a day , and the workout is excellent for your body, especially if you’re a weight watcher. Your reward for continuous practice is the expenditure of a 1,000 calories per hour of play. Now that’s some workout! Also the President’s Council on Physical Fitness has rated Squash as number one among the heavy workout sports.

Squash courts are opening up all over the city, so you can even get an hour’s practice in during a lunch break. To mention a couple, there’s the Park Avenue Squash and Racquet Club, 3 Park A venue at 34th Street and The Fifth Avenue Racket Club, 37th Street and 5th Avenue. They both offer fabulous learning programs — a thorough course covering all the fundamentals of the game, in groups of four, meeting for one hour per week for eight weeks. Then there are semi-private and private
lessons.

Your Squash-Wear should consist of shorts, tee-shirts and sneakers, preferably all white. A small towel, worn around your neck or tucked tightly into your shorts to keep you dry, your racket and ball are all you need. So, if you want to build up your stamina, muscle tone, lose weight and release your frustrations, then take on a real challenge such as Squash — you’ll undoubtedly accomplish all four. It affords a quick, pleasant workout — the beginner can have just as much fun as the expert. So come, join the fun and “raise a racket” — a Squash racket, that is.

Squash — the fastest indoor sport ever — that’s what it’s all about!