There is a release of richness in this magnificent city of ours. This metropolis, called New York, can provide from the sublime to the ridiculous, depending on where your head is. A composite of museums, parks, theaters, fashions, restaurants, etc., that are entertaining and soul searching, beckon you to savor.

As the changing of time goes systematically about its way, so do people and their minds. One astounding aspect of time is that while it can project us into the future, it can also retrospectively find us in the past.

The past can boast of the “1920s” which were hot and steeped in a club and restaurant theme — now being captured, displayed and portrayed on Broadway and reminisces of old-timers. People have always had a need of something of the past to remind them of from whence they came. 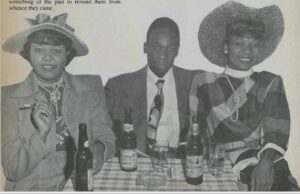 This Era — when people who lived downtown went uptown to clubs and restaurants where they seemed to enjoy a light sense of responsibility or maybe even a little foreign intrigue — was greatly influenced by music. And music is one of the distinct contributions Blacks have made to the “20s.” In almost every club, customers were dancing the “Cake Walk” or the ” Charleston.” Both were the big rage for the ballrooms. Those who were fortunate enough to have what was called “Music Machines” would roll back the carpets and let go. The Buck and Wing and the Fox Trot, both of Negro origin, were eventually modified and adapted to the ballrooms.

In the late “1920s”, the principal clubs in Harlem were “Smalls’ Paradise” (being the largest), “Connie’s Inn”, “The Cotton Club” and “The Lenox Avenue Club.” One could always find a good colored orchestra playing and perhaps a deep gut song interpreted by Ethel Waters, the Queen of Harlem. Harlem, with its spicy restaurants and clubs offered dancing, dining and speakeasies. You could sit down and prepare your palate for some “fixins” that would delight you — “pig’s feet” to “Hold Me Tight And Don’t Let Go” music to toe-tapping soulful crooning.

Smalls, The Cotton Club and Connies Inn
the scene for Blacks on Saturday Night

This was a time when the big ballrooms featured Duke Ellington and his Cotton Club Orchestra, Fess Williams and his Royal Flush Orchestra, or Lockwood Lewis and his “Oh Boys.” Jelly Rolls Morton and his ” Red Hot Peppers,” Josephine Baker and Louis Armstrong, and of course, the Lady of the Blues, Bessie Smith.

The “1930s” and the “1940s” saw the evolution of jazz, which was incorporated into the popular dance tunes played in the supper clubs and ballrooms throughout the city. Each decade gave New York a full and tantalizing experience to remember. “Smalls” gave you the great sound of the Count and Ella Fitzgerald. And up at the Savoy Ballroom, Billie Holiday and Duke Ellington appeared together. What times they must have had!

After such evenings, one could stop off at Godfrey’s Beer Garden and Restaurant. This era also saw the “Peace Kitchen” and “Father Divine’s,” where a good, home cooked meal was for the price of 10 or 15 cents. These places were set up to feed the poor who, for so little money, could dine like a king. All of this kept the mind and soul together as well as the stomachs full.

When you stop and think of the decades that have come and gone,” pictures reminiscent of the past rekindle those pleasant memories. They set the mood for understanding how dear the years were. In and out of the clubs and ballrooms: in formal attire and Sunday’s go-to-meetin’-clothes, Blacks knew how to have a good time and enjoyed each other.

Reach back into your own family albums and see how many photographs you can find showing these moments.

Our next decade saw a fighter by the name of Joe Louis, who was the World ‘s Heavyweight Champ, open up a fabulous bar and restaurant, where everyone and anyone could go and eat, drink and be entertained by the likes of Dizzy, Coltrane, Miles, Lena, Sarah, Charlie “Yard Bird” Parker, Monk and Eckstine. It was also in the same decade that loverboy, boxer and tap dancer, Sugar Ray Robinson opened his night club. During this same time, the famous ” Downbeat ” restaurant and nightclub made its debut.

Entertainment in New York was at an all time high, even though the Korean and Vietnam Wars put in their bids for destruction and unrest during the 1950s and “1960s. The restaurants and clubs still continued to thrive. However, Harlem started losing ground as a prominent Negro entertainment center. Even though economic crises were raging, restaurants and supper clubs were beginning to emerge all over the city. Formerly, all white clubs were booking in major Black acts that used to appear exclusively in Harlem. Even Fraunces’ Tavern in the Wall Street area, which was originally owned by a Black man, reestablished itself. Harlem’s Apollo Theatre, however, continued to reign as the arena for Black talent and as the clearing house that separated the good talent from the bad. Still, little by little the fabulous clubs began to peter out, one at a time, by the end of the 1960s.

When you stop to think of the decades that have come and gone, the minds, talents and bodies with them, it does amaze you. The 1960s through the 1970s have seen not only a changed New York, but the people as well as the famous places have undergone dramatic metamorphoses. All kinds of supper clubs, restaurants and discos are happening around this metropolis today. The early 1960s saw the Village Gate and hundreds of quaint coffee houses, impromptu arenas and guitar plucking-emanating B. B. King. This was a time when everyone surged flocked to the Village’s Trudy Hellers, while uptown, the palladium was vibrating with the sounds of Latin music played by such greats as Tito Puente and Eddie Palmieri.

Today, with the salsa-soul, the hustle and the whatever makes you happy, there is a tremendous explosion. From the apex to the zenith —whatever your mood, taste or finances, any direction you may wish is available to you. The newest clubs give total posh, live plants and trees and exotic blinking and flashing lights. From dining at the top of the World Trade Center, elegant dining in sub-basement areas, to roof gardens and sidewalk cafes. Dining from the Eastside to the Westside is a matter of what ethnic, national or international form of cooking meets your preferential taste.

For those who into lofts and bathhouses, they too, are here and making their presence known. With such advancements in the technological fields, each place today, whether it be dining, dancing or drinking, the atmosphere can be so filling that your desires are all encompassed. Technology can also throw a cloak of nonthreatening anonymity over insecurities and hang-ups and leave no room for stigmas of any kind.

Paradoxes of carnality and wholesomeness, funk and spiritual energy, despite economic woes, are precisely what New York is about. A great cultural institution is crusading across the byways of this City, attempting to enhance the quality of our life styles and to confirm the deep importance of keeping the force alive. In reaching back and coming forth, entertainment has endured evolutionary alterations beyond total comprehension. So let it be! Take a deep breath. Hold your chin up and enjoy the good life — whatever the style, however the price.