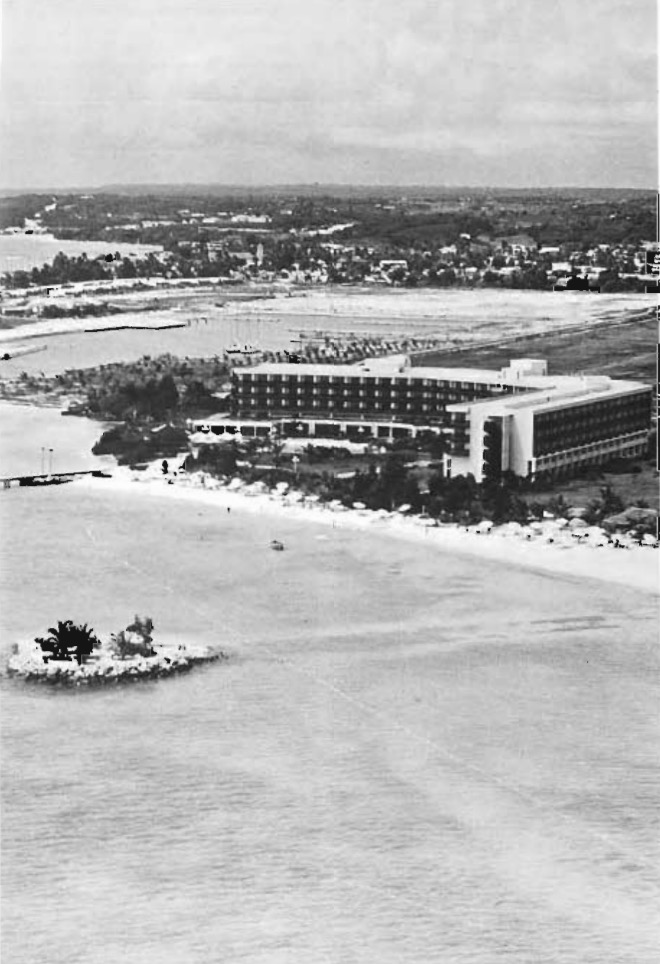 We’ve all heard of the American Plan, then there’s the Continental Plan; but what about the “Ken Webb Plan”? Full breakfast lunch or dinner plus non-stop disco are its features. Kenneth Joseph Webb, better known as Spider Webb on WBLS, is its originator.

Not only is Ken a successful DJ, radio engineer and college instructor, he’s a seasoned traveller and shrewd businessman. Together with Traveling Taj of Manhattan, he put together his first annual vacation extravaganza. “Guadeloupe is the new tourist spot,” bubbled Ken.

“I’ve got a mailing list of at least 2,000 folks for our next trip.” On August 25, 1977, he and twenty-three others boarded an American Airlines jet and bid farewell to the city he loves so well. Before departure they took their last bite of the “Apple” at the chic River Cafe located just beneath the Brooklyn Bridge. Ken entered formally attired with mother on one arm and wife on the other. The kids had to stay home that evening while Sultan of Traveling Taj and Ken hosted an evening to be remembered. Some of their special guests included Barbara Harris of ABC Records, performers Valerie Simpson & Nick Ashford and Audrey Bernard of the Amsterdam News. 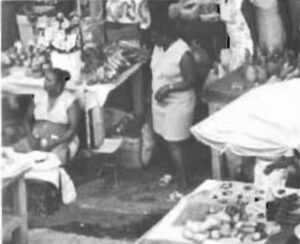 “You get a better tan on black sand,” say the local people of the sea coast of Basse-Terre. Black sand beaches are just one of the many natural wonders of Guadeloupe. Actually composed of two beautiful wing shaped islands connected by a draw bridge, Guadeloupe is often referred to as the butterfly of the Caribbean. This small department of France is truly a paradise in the world of vacation. Let’s follow the route through the lovely country side together to find out the reason for its great success in the travel industry. There is no “best” time to go to Guadeloupe weather-wise. The temperature remains in the high 70s to low 80s throughout the year. Even when it rains, the duration is short and affects the actual number of sunlight hours very little. Special events and holidays are observed annually. Some of the more popular ones include:

Fete Des Cuisineres, or Cook’s Festival — August 6. A parade and mass followed by a six hour feast which may be enjoyed by visitors free of charge are the highlights of the day.

Festival of St. Barthélemy on St. Barts — August 21-23. A three day fair featuring booths and decorations by day and dancing, wining and dining during evening hours.

There are also quite a few holidays throughout the year when most stores and places of business are closed. These are:

We’ll have our choice of arriving at the Raizet Airport in Pointe-a-Pitre or one of three cruise ship berths. The airport is modem and serviced by Air Canada, Air France, American Airlines, Eastern Airlines, Liat Prinair, Windward Islands Airways, as well as two local airlines and a charter service.

Its facilities include air-conditioned lounge and bars. Duty-free shops, post office, welcome booth, car rental desk, lickers, sightseeing operators, newspaper stands, souvenir shops, flower shops, tobacco and film shops, hair dresser, snack bar, restaurant, taxi stands, parking, gas station and even a nearby supermarket. Built in 1972, or Raizet is one of the busiest and best in the Caribbean. Flight time from New York to Guadalupe is four hours. A cruise, of course, would take a formidable chunk of our time; but traveling with such lines as Holland America and Royal Caribbean cruise permits us to begin our vacation upon departure. Passports and vaccinations are not required regardless of how we get there. We need only proof of identity, such as a drivers license or birth certificate.

There are approximately 15 hotels with a total of 2,800 rooms from which we may choose. Two of these hotels are rated “four-star” resorts, namely, the Auberge de la Vieille Tour and the Meridien. Ken chose the Meridien and loved it. Almost 25 miles from the airport, the Meridien has successfully attempted to become the total resort. It offers every modern convenience: convention facilities, private landing strip and has a golf course and marina currently under construction. All major credit cards are honored there and children stay free in their parents room. 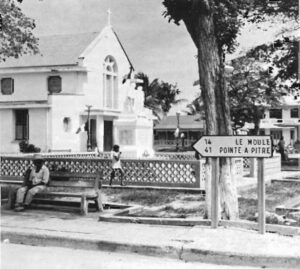 The verdant beauty and balmy temperatures of Guadeloupe will cause some of we city-dwellers to breathe deeply and attempt to become one with nature. Backpacking is allowed on public beaches and in what’s known as the Natural Park. This park covers 74,100 acres or about a fifth of the land. Among its natural wonders are the Soufriere volcano (still monitored for activity), the Carbet waterfalls, and the varied flowers, plants and trees that cover the mountainsides. If communing with nature is truly your thing, but proves itself to be a little strenuous, you are invited to let it all hang out on one of the three nudist beaches. (Pointe Tarare, Ilet Goseer and Les Alizes.)

Put your clothes back on . . . we’re ready for nighttime entertainment! Dinner, shows and dancing are arranged by all of the large resort hotels. Food ranges from exacting French cuisine to creole masterpiece is designed to make you call for more, more, more. Lobster was Ken’s favorite. After trying it for dinner he and his wife Theresa decided they’d take it on for lunch also. Shows include local entertainers and bands. We may also see a folkloric company perform its review. The bands usually use Caribbean rhythms to get you and you’re on your feet, but Ken turned the Meridien’s Le Bet-a-Feu discotheque into a nightly disco Inferno during his stay.

There are many sports to enjoy in Guadalupe. Some of us may stick to the more conventional tennis, fishing, ping-pong, volleyball and swimming; but for the adventurous, there’s snorkeling, scuba diving, water skiing and flying. The Meridien is the only hotel providing facilities for all the aforementioned sports. Instruction is usually given at no charge. The normal fee is sometimes charged for use of equipment.

Last, but certainly not least, let’s do some shopping. To get to the shops, we can either take advantage of public transportation or rent a car. Small jitney bus comprises the better part of the inter-island bus system on both Grand-Terre and Basse-Terre Islands. These buses run quite often during the day and provide an excellent opportunity to sightsee. There are also two additional bus lines in the city of Pointe-a-Pitre. The buses of Guadalupe are modern and comfortable. Eight car rental companies are represented in Guadalupe including Avis, Hertz and National-Europcar. Very few automatic and air-conditioned cars are available, but racing along in a Peugeot, Renault or Fiat doesn’t sound all bad to me. Rates range from about $11-$21 per day plus $.06-$.11 per mile. Keep in mind though the gas is very expensive (about $1.60 per gallon). Deciding what to buy once at the shops is not as simple as deciding how to get there. Everything of French origin is dramatically less expensive than the same product sold in the United States. Further discounts may be obtained when large ships are in Port certain shops do remain open longer or on the weekend.

Since being “discovered” in 1493 by Columbus on his second voyage, Guadeloupe has caused many men to fight for her possession.

French, Spanish and English alike experienced the chalky hills and flatlands and white beaches of Grand-Terre. They’ve also witnessed the mountains, waterfalls and absolutely lush vegetation of Basse-Terre. Describing his arrival at Basse-Terre Columbus wrote in his log, “We arrived seeing ahead of us a large mountain which seemed to want to rise up to the sky, in the middle of which was a peak higher than all the rest of the mountains from which flowed a living stream.” The French won Guadeloupe in 1763 when they traded Canada for her.

The dark shadow of slavery passed over the history of the islands, ending in 1887. Schoelcher is given credit as one of the main forces in the battle to abolish slavery and a holiday is celebrated annually in his honor. Due to this all too familiar turn of events, the culture of this official French community is distinctly Creole. The people move at a much slower pace than Americans do and enjoy life to the fullest. So, let’s not get an attitude if the bellboy doesn’t hop to it US style. We must remember that we’re in another part of the world and we observe a different type of life style. Guadeloupe is beautiful. Relax and enjoy it.