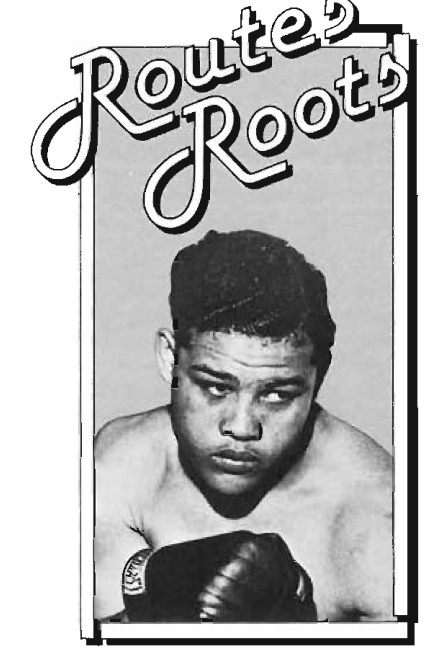 As I scrambled to surface through the sea of bodies that crowded the room and perched myself high on the arm of my father’s favorite chair, my heart was pounding. Our living room was filled with anticipation. The small radio blared the voice of the sportscaster who glibly spoke with a cadence that mesmerized everyone in the small tenement room. All thoughts were captivated by this voice and through it we were transported to ringside — a thousand miles away. Suddenly, there was a heavy uneasy silence. Then sharply and methodically, like an orchestra being led by its maestro, this assemblage started its chant: “one, two, three, … ” count by count. On the count of ten, all hell broke loose. “He won! He’s still champ!” This jubilation enveloped the entire block. The streets were alive with people shouting and dancing and celebrating. Joe Louis had maintained the title Heavyweight Champion of the World .

This scene was not an isolated incident in St. Louis, but was happening simultaneously in Black neighborhoods throughout America. Joe Louis was a hero. He was a winner. He triumphed over impossible odds at a time when America was at war, the economy was experiencing a depression and the Black existence was at an all time low. He became a positive symbol of victory.

The champion, however, never outgrew the honesty and humility that obviously came from his humble beginnings. Joe was born on May 13, 1914, to Monroe and Lily Barrow on a farm near Lafayette, Alabama. When Joe was a small child his father died leaving seven children to scratch out their lives on a worn out tenant farm. But, Lilly Barrow was strong of body and will. Single-handedly she fed her family and trained them in the ways of the church. Later she married Patrick Brooks and moved to Detroit, Michigan. Little did Joe know that this would be the turning point in his life.

He discarded his school books and violin for boxing gloves. By 1932 he had won the Detroit Golden Gloves and later, the National Light Heavyweight Championship in St. Louis.

Joe Louis became the Heavyweight Champion of the World.

The rest is history. Joe Louis held the title continuously from 1937 to 1949 and defeated six world champions by knockouts. His record is unequalled to this day. When he retired from the ring in 1951, Joe had fought 71 bouts. He won 68 of them — 54 were knockouts.

Joe Louis’ ability got universal acclaim when he knocked out the pride of Nazi Germany , Max Schmeling. The Brown Bomber’s victory was an American blow against the Hitler regime. Joe willingly interrupted his career to join the Army during World War II. He was promoted to sergeant, toured Army camps, performed exhibition fights and won the Legion of Merit Medal. He was a true patriot and donated his exhibition money to the government. His generous nature and charitable attitude often surpassed practicality.

Joe was not a millionaire, although he did share in three of the eight one million dollar gates. His financial career started at a disadvantage. From 1919 to 1926, taxes were not levied on the incomes of boxers. For example, Gene Tunney made almost $1,000,000 just from his second Dempsey fight. Dempsey himself earned over $2,400,000 in eight title bouts. Interestingly, neither of them paid income tax. On the other hand, it took Joe 27 fights to make $2,722,000. All of this income was heavily taxed by the Federal Government.

Much of Joe’s life outside the ring was plagued by marital problems, tax hearings, business failures and unwise investments. But, these problems did not prevent him from becoming an expert in the arena. He perfected his craft and did it longer, more often and better than anyone else in the fight business.

The ambiance that Joe Louis created in the boxing ring will probably never be duplicated. Modern times and circumstances have sullied hero worship … and that’s unfortunate. We need Black heroes that we can cherish and extol unabashedly. Joe Louis’ greatest victory was solidifying the Black populous into a single suspended heartbeat while waiting for the magic number 10. The count may be just an echo now, but the announcement that followed is still loud and clear. “The winner and still champion, Joe Louis!”