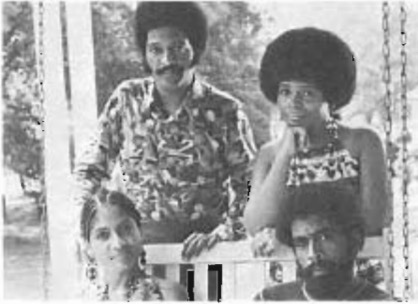 Music has been called “The Brandy of the damned” and “The universal language of Mankind.” It has different effects on different people and is truly a medium that allows listeners and performers alike to experience feelings that are unreachable through any other source.

The Descendants of Mike and Phoebe, a talented jazz-folk music ensemble, uses music also as their medium for communication. The message The Descendants convey is one of strong cultural heritage.

Their first album release, The Descendants of Mike and Phoebe: A Spirit Speaks was well received and lauded by critics. Musically it is held together by the writings of Bill Lee. Vocally, Grace Lee Mims’ purity and clarity gives depth and fire to the material. Her voice is strong but sensuously sweet. Consuela Lee Moorehead commands the keyboard with classical style inspired by a jazz/gospel background. She is versatile and leads the group through scene and mood changes with great skill. The flugelhorn and trumpet played by Cliff Lee add the touch of spiritual wailing or jubilation in their musical selections. His horn speaks and interprets and complements the deftly played bass by his brother Bill . They blend harmoniously through song and instrumentation to create a musical mosaic .

Albums are important for posterity, but The Descendants are at their best in live concert. Some months ago at New York’s Cami Hall they performed a folk-opera, The Quarters written by Bill Lee. The Quarters takes its name from the former slave dwellings in Snow Hill, Alabama. The opera was fresh and exhilarating. The mutual love and respect for the material coupled with their loyalty and devotion to each other propels their music into an arena that cannot be understood vicariously. They must be seen as well as heard to be completely felt. While talking with Cliff Lee, the youngest member of the ensemble, I was guided through the reconstruction of events of the past that did and still are dictating the present course of the group. The traceable beginning of these events was the tremendous migration of slaves from the southern seaboard states to the newly admitted state of Alabama in 1819. Mike and Phoebe were slaves and lived together with their children in South Carolina when a man named David Wrumph bought Phoebe and their children and moved them to Alabama. Mike was left in South Carolina but vowed to Phoebe that he’d join her and the children in Alabama.

Mike, now alone, labored long hours daily for his master and worked nights for himself hoping to make extra money to buy his freedom. He worked this arduous schedule for four years before he was able to buy his freedom. Once free, he started his trek, mostly by foot, to Alabama. After what must’ve seemed like forever, he found Phoebe and his children and we joined them in slavery in the service of David Wrumph. They lived together in Alabama until they died during the Civil War but were survived by many children.

One of Mike and Phoebe’s prodigious heirs was William J. Edwards who was part of the first graduating class of Tuskegee Institute. He and the founder, Booker T. Washington were comrades and both men were concerned about the education and welfare of Blacks during the post slavery period. After graduating, William set up his own school in 1893, Snow Hill Normal Institute in Alabama. It flourished as a boarding school for Blacks and was responsible for training many former slaves. The great Black scientist and inventor Dr. George Washington Carver conducted conferences and held lectures at Snow Hill.

In 1918, William J. Edwards published his autobiography, Twenty-Five Years in the Black Belt and secured a place in history for the touching “piece of drama” about his great grand parents Mike and Phoebe.

The town of Snow Hill, like most small southern towns, lost many offsprings to the glitter and glamour of the cities, colleges and careers. The branches of William’s Family tree grew many illustrious leaves with diversified lifestyles. William’s daughter Alberta, a gifted pianist, married Arnold W. Lee a skilled musician and they had seven children. All of the seven children were taught an instrument, were graduated from college and in so doing, many strayed from Snow Hill.

Generally the trend of Black youngsters leaving the South for opportunities elsewhere could have been disastrous for the family structure if it were not offset by some other positive trend or tradition. The family reunion offers reciprocity and thousands of Blacks return “down south” for picnics, weddings, funerals and holidays yearly. These occasions usually are presided over by the senior family member. The reunion serves to recharge spiritual fires and rejuvenates important family ties. It reaffirms your values; keeps your head level and feet on the ground. Such a gathering is often a personal catharsis.

A serious illness in the family prompted the Lee family to return to the fold of Snow Hill in the summer of 1965. Susie Edwards, widow of William Edwards and grandmother of the Lee children, was the focal point and served as a common denominator for all the family. Being musically trained and oriented, the children often sang and played together with their parents. Susie Edwards took one of these occasions and told stories. Even though the story of her great, great grandparents Mike and Phoebe had already been published it had not caused her grandchildren any great concern. But once she started telling the story at the reunion, the Lee children were never the same.

Bill Lee delved into the material and spent many hours with his grandmother searching and piecing together his heritage. His excitement was infectious and soon the renewed knowledge and pride of their past became the unifying force for the already close-knit family.

Three years later the wheels of a professional musical group started to turn. Six of the seven Lee children performed at Hampton Institute. Slowly the group began to evolve under the prodding and guidance of Bill Lee, who by this time was an established composer-arranger-bassist. Four members of the family eventually committed themselves to be the medium for their message by officially forming The Descendants of Mike and Phoebe.

The story of their formation is as heart warming as their music. Audiences have been thrilled across the country just as I was and hopefully this is just the beginning. They are vital performers. The Descendants of Mike and Phoebe not only bring us pleasure but also enlightenment. They are proving what we already know but sometimes forget — the Black family is strong and has survived and if kept intact can be the spring-board to thrust its young forward.

The seeds of courage and family loyalty planted by Mike and Phoebe over a hundred years ago has produced a strong tree bearing sweet life giving fruit for the world to harvest musically.