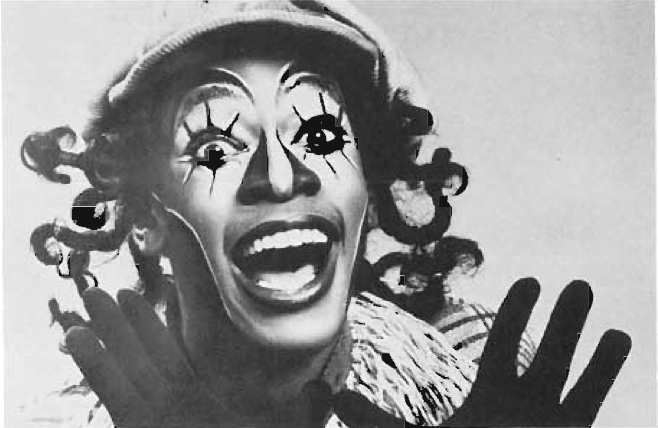 One of the major aims of this feature is to introduce our readers not only to well-known artists, but to those other performing personalities who are making contributions to the Black Arts here in New York City. They do their jobs with great skill, yet are unknown except to the most devoted followers of the Black performing arts. They are people such as the subjects of this month’s issue, Gregg Burge, who plays the Scarecrow in The Wiz and Dyann Robinson, who is not only a featured dancer in Bubbling Brown Sugar, but also is its dance captain and assistant to the choreographer, Billy Wilson. A dance captain’s job is to keep the dance segments of the show intact during the absence of the choreographer (which often happens during a long running show).

Although Gregg, 19 and Dyann, 35 are different in age groups, they share characteristics and common experiences. Both are very ambitious performers who have worked hard to advance their careers. Both have the strong egos and confidence in their abilities to be highly competitive in today’s dance circles. However, both are different because of their local upbringing. As a true Black child of the 1970s who has grown up seeing Blacks, with some degree of regularity, on television, on Broadway and in films, Gregg sees no obstacle that he can’t overcome.

At ten, he was already dancing in a show with the famous Hoofers, a group of highly talented Black tap and jazz dancers. He attended the High School of Performing Arts, after it had finally opened its doors to qualified Black students. He began doing TV commercials after they were pressured to use more Blacks. At the age of 17, he got the role of Scarecrow understudy in The Wiz. It’s no wonder he declares without hesitation, “The talent is here. I know I’m ready. All I want is the chance to expose it.” Dyann, while having the same drive and confidence, comes from another background. She grew up in Tuskegee, Alabama during the time when rampant segregation was still the overt law of the South. I, too, grew up in Tuskegee during the same years and can personally share in Dyann’s story.

Dyann started studying dance at the age of seven with Mrs. Jesse Gibson. She studied with her until she was ten or until Mrs. Gibson moved away. Since there was no other teacher available in Tuskegee, her mother had to drive Dyann and her younger sister, Clintonia, over to Atlanta, Georgia for dance lessons. They rode this nearly 400 miles roundtrip every two weeks. Gregg, at the age of ten was making his professional debut with the well-known Hoofers, while Dyann and several other young Black dance students in Tuskegee were sneaking away quietly to study ballet in Alabama. They drove to Opelika, Alabama weekly to study ballet with a white English woman, Mrs. Vilzak. It had to be done quietly she remembers, because technically this was illegal. “We used to go up there and take lessons in a funeral parlor,” Dyann notes with a wry smile, ” because it was the only place available that was suitable. Can’t you just see us dancing in that funeral parlor?”

When time came to go to college, Dyann looked through Dance Magazine for information on a school where she could study dance. Specifically, one that would take a Black student. She finally settled on Butler University in Indiana. “The school itself was not a very hospitable place for Blacks,” she says, “but the Dance Department was okay. As far as I know, I was the first Black student to make it through their dance program.” Right out of college, she made the obligatory trek to New York City, the dance capital of the country. She was lucky enough and talented enough to get a job soon after arriving, as a guest artist with the American Ballet Theatre (ABT) dancing in an Agnes DeMille choreograph work Four Marys. It was also at this time that Dyann learned some hard facts of life about the dance scene in New York City, especially ballet. “With my background,” she notes, “I was not exactly naive about prejudice. But I really thought that the New York world would be open to talent. I knew I could dance ballet. It had always been my first love. However, when I approached Lucia Chase, ABT’s head, about joining the company, she told me straight out that she wouldn’t have any Black dancers in her company unless she took sixteen, to dance Les Sylphides. And, she was hardly going to hire sixteen Black dancers. That was her way of telling me to forget it since we both knew that wasn’t going to happen. Actually, they’ve only used Blacks as guest dancers.”

That attitude on the part of the ballet establishment hasn’t really changed that much. Several years ago when George Balanchine, the Godfather of the ABT world, was asked to describe his ideal ballerina, he said among other things that she must be “as pale as a freshly peeled apple.”

Blocked in her attempts to get into the New York City Ballet world and having no Dance Theatre of Harlem to turn to, Dyann began to look elsewhere to dance. One trip took her to Boston where she met Billy Wilson, a Black male ballet dancer who became the cultural influence of her life. He encouraged her to take a position with Maurice Bejart’s company, Ballet of the 20th Century. There she became the first Black woman to dance with this Brussels, Belgium based company. An amazing incident happened while she was with “the Bejart,” (the shortened term for this internationally famed company) that showed the pitfalls awaiting the Black ballet dancer, but in a lighter vein. The ballerinas were all to wear flesh-colored tights and Dyann was dutifully given hers. Only they were pink-hardly the color of her deep brown skin.” I told them that no way was I going out there in pink tights.” She laughs, “I wanted brown. Bejart finally saw things my way.” After six months of dancing around the world with Bejart, Dyann decided to come back to Boston to work again with Wilson . When he got the job with Bubbling Brown Sugar, he hired her as his assistant.

Unlike Dyann’s problems with prejudice, Gregg’s major frustration in his already nine-year show biz career occurred during his first year with The Wiz, when he was an understudy. “It was so frustrating,” he explains, “because I knew I could execute the role better. However, I did learn one important thing from that experience and that is to make sure your understudy knows what’s happening. Be helpful to him. If he’s good and can do the role, then management won’t squawk so much if you want to miss an occasional show to do something else.” Gregg’s something else is getting a nightclub act together. One of his back-up singers is his 21-year old brother, Fred.

There is yet, one other aspect of their careers that Gregg and Dyann share. They both received strong support from their families. I have already mentioned how Dyann’s drove her around the countryside to provide her proper teaching. Gregg’s folks offered that same kind of support. He says of them: “I feel blessed that God gave me the type of parents I have. Without them I wouldn’t be where l am now. They really sacrificed for us, so that we could move ahead.”

Moving ahead is exactly what Gregg and Dyann are still doing and we are glad to be able to share a little of them with you. They are both doing well in their shows, executing their skill and talent nightly and we hope you will get the chance to experience them.