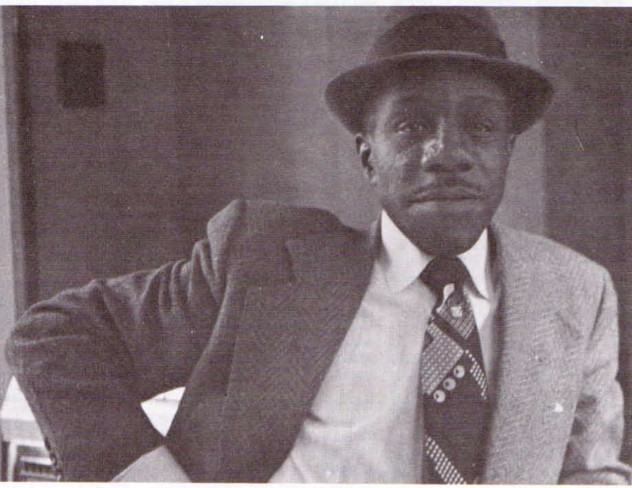 Buckwheat Thomas, the chocolate brown, gingham-clad pickaninny in the Little Rascals series, has traveled a long way since his high-life Hollywood days as a child star and has gotten nowhere fast. Today, five feel tall and fifty-some-odd-years old, Buckwheat Thomas is a little big man on Manhattan’s Westside.

To many who know him along the stretch of hip-chic shops, restaurants, and nightspots lining and Street from Broadway to Central Park West, Buckwheat Thomas is simply called Mr. B.

The residents of the Franconia Hotel and apartments off Central Park West have known Mr. B as the “best colored doorman the Franconia has ever had,” says one elderly resident.

But at the eight o’clock hour — that 60-minute break from his doorman duties — Mr. B does a night shift and becomes the man of the hour at one or another of his favorite haunts in the neighborhood.

Tonight he flanks the bar of the China Gourmet Bar and Restaurant off Columbus Avenue, dressed in his evening regalia: grey felt fedora, whose snip of blue feather fringed in red can’t play down the sheer patina of age that glistens from the old hat; a grey zoot suit, and well-worn wing-tipped shoes.

“I’m night people,’’ says Mr. B. “I like the nightlife, people are more handsome then,’’ and smiles; lips arched high over a wide toothless expanse that is his mouth.

Mr. B sips Hennessy brandy and fingers the tall glass of iced-water chaser. His eyes are bloodshot and glassy, yet in perpetual motion, seeking out a familiar face around the bar. He sits tall on a bar stool, his feet dangling far from the floor.

The now-crowded bar seems at times more like the floor of the United Nations as Mr. B calls out greetings and goodbyes drawn from a potpourri of languages. Bon soir, my friend; Alrightee; What’s happenin’ ?; there my young friend; Howdy fella!; Auf Wiedersehn — that’s goodbye in Jewish, German Jewish. Mr. B, by his presence nightly, has fashioned this mostly take-out neighborhood food-stop, with a fragrant steamy kitchen, into a must-stop for fans of all sorts, who share their gossip, hassles, and hopes with this little big man of the Big Apple night.

The Westside holds a sad edge this evening. Folks in the neighborhood know that Mr. B plans to move on— to Arizona and still another beginning.

He says he has a new deal to open a block-long hotel with his childhood pal and Our Gang sidekick, Spanky McFarland. He talks about his plans with a raspy excitement that surges from a diminutive frame that has never been able to contain his big time hopes — nor the many failures.

“Yeah, Me and Spanky — that guy is worth his weight in gold. We plan to do it up right. They don’t call me Mr. B for nothin’. It’s all new from here on out.”

Buckwheat Thomas, the child star, began in show business on Chicago’s West Side, where he was born the third of four children. [“When! Hell, I’m not tellin’.”) He grew up, played and danced with a group of black and white youngsters, all the kids of chorus-dancer parents, who would later attain their own fame as the street-wise pranksters of Hal Roach’s Our Gang shorts, later called The Little Rascals.

“Each night one parent would miss a show to take care of us kids until one night the manager said, ‘Listen, I didn’t hire babysitters, I hired dancers.’ Our parents told him what the matter was and the next night he said, ‘Okay, put all them brats in show business.'”

That stroke of economy set the stage for the beginning and the near-end of Buckwheat Thomas’ career as the androgynous odd-ball character with the myriad braids and bows to match. Buckwheat was the last addition to the Our Gang bunch and he played with them he says, “Some seven good years.” He was featured in two Hal Roach feature films, one with Spanky McFarland called Anniversary Trouble in 1938. But by the age of 12, Buckwheat Thomas’ career had been spent.

“All I ever seemed to do was roll my eyes and whistle. Remember?” Mr. B asks with some urgency. “We were all bright-eyed and bushy-tailed in those days.”

Those days which Mr. B recalls marked a singularly significant film era for Blacks between the world wars, when the film was used as a racial leveler, a more liberal instrument than it would become in later decades. Black men had lost their lives in World War I and the Black actor gained a foot in the door of Hollywood.

Comedy was king in the Hollywood of the 1930s and the jester, Black or white, was ushered in for a decade of big laughs. And when Hollywood had had its last laugh, the black character would be cast in a different light: eye-popping fools and foils who would step-n-fetch-it, Tom and Jemima for the comic relief from the endless race war.

Mr. B tips his hat and rustles about on his bar stool with thoughts of the Our Gang and producer Hal Roach, who portrayed the youngsters as equals, if only in the child’s world. Many of the Little Rascals would not have the same footing later.

“We had four hours of schoolin’ together, two and a half hours of filmin’ in a big studio, and I remember that we all ate at one big round table. It was really somethin’. Spanky would dip in my plate and I would dip in his. The only one who couldn’t come to the table was Pete, our dog, but we always got around that.

“I never did keep in touch with those guys, though, except Spanky. I guess some of them are richer now but most of them are dead.”

The Little Rascals went their separate and often tragic ways. Robert Blake, the snotty-nosed friend of Butch, the dreaded arch nemesis of the gang, is today the ABC-TV cop-star, Baretta. Alfalfa, the gawky adolescent who serenaded, relentlessly, the darling Darlene with his quivering falsetto, was shot to death crouched over a crap game in Chicago in the late 1960s.

Mr. B remembers Hal Roach whose egalitarianism was a great inspiration to little Buckwheat but today serves as a paper thin cushioning against the realities of Mr. B’s life: black and poor.

“He’s all right with me. He set me up right with $225 a month for the rest of my life — until I die. You know every bit helps. I’ll never forget that man. He’ll always be in my book. The man had a vision and a lot of patience . . .  nothing like today.”

Here, the pleasant memories fade as the career of one more child star takes the painful down slide. At 18, Mr. B returned to Chicago and the well-beaten stage trail of his dancer — parents. After several performances in and around Chicago, Mr. B danced his way to New York, leaving behind a Puerto Rican woman, the mother of his son and only child.

“She wrote to tell me she was carrying my child, but she didn’t want to come to New York and spoil my career,” Mr. B says wryly. “So she never came. Funny, huh?” Mr. B smiles that smile in the face of twisted fate.

“Hard times? I didn’t know about them until I came to New York, The Big Apple. Y-e-a-h, with a hard skin.”

Buckwheat Thomas found the magic of Hollywood gone from the television studios and totally missed his cue there. “They grab you, pose you, act like they doin’ you a favor. I used to see red.” Mr. B shunned the advice of promoters who urged him to do commercials and go on the talk-show circuit, and he settled down — way down — to the life of busboy and manservant.

He recites a long list of odd jobs as if it was a wide repertoire of stage performances. Mr. B played the lunch counter at Whelan’s Drugstore on 42 Street, Horn & Hardarts, Bickford’s, Hector’s and Chandler’s cocktail lounge. Down and out, Harlem was his only kick.

“They used to call me the Duke of Harlem. Yeah, I used to wear a high hat, a white silk scarf, and a cape. The women loved me when nobody else did.”

Another brandy. Midnight black with a shock of grey hair slicked down at the sides, forming a pompadour to-do at the crown, like some halo to this fallen star of Hollywood, Mr. B takes his curtain call nightly in the small shadowy space of the China Gourmet.

There are cheers now. A cake and champagne are presented to Mr B. A soul song pitches on the radio and above the tears and the laughter, Mr. B sings along, paraphrasing his so-long to New York.

“It’s time,” he says and shuffles around on his bar stool near the back of the bar. He commands the space as if it were center stage. “I’m goin’ to open a few doors for myself . . . my future.”

There is a sadness in his words that can be felt more strikingly than the many handshakes and promises to keep in touch. We wonder about the future. How many more beginnings? “I’m planning to make a comeback . . .  sometimes  . . .  maybe next year. I want to come back as a gangster, though. No more comedy, I’m too old and wise for that kind of stuff now.”