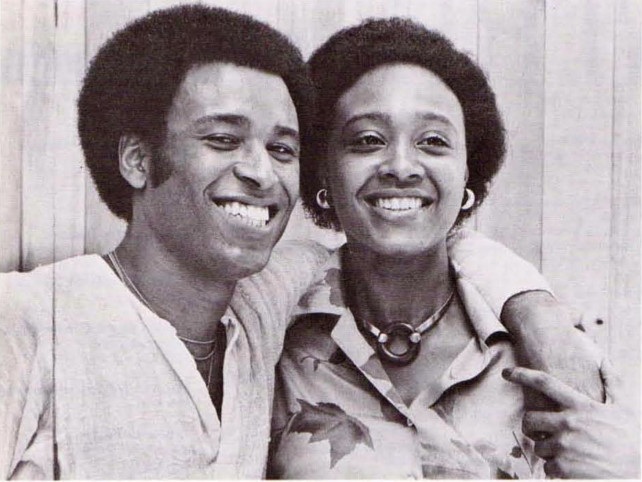 In the history of Black Arts and entertainment there have been dance teams, comedy teams, acting teams and singing teams, but never a mime team. Now, however, thanks to Judith Alexa Jackson and Billy Jaye Banner, two brilliant young mimes now working in New York City, another addition has been made to that seemingly never ending list of Black firsts.

They met in December 1977 when both were involved in a group of plays at the Harlem Performance Center. Notes Billy: “W e had heard of each other, but this was our first meeting. We immediately hit it off. While doing the shows we began to compare notes and before long had decided to hook up and form a team. As far as we know, we are the only Black mime team working today. In fact, there aren’t not many mime teams working anywhere in this country.”

My first question to Judy and Billy, who are the first mimes to really make me appreciate the complicated art form, was what exactly is Mime? Billy, who was born and raised in North Carolina and who is a great, great, great nephew of Frederick Douglass spoke first. “It’s the art of gesture,” he noted, “not the acting out of words, but the art of gesture where one sculpts in space. In mime, you communicate only with your body. You can use props, but you really don’t need them.”

Added Judy, a 5-foot-9-inch model-lean native of Washington, DC: “Mime is close to dance, but whereas in dance, the performer will really leap to make a point, the mime creates the illusion of leaping without leaving the floor. And I must note that true mime is also not to be confused with pantomime, which is the art of the acting out of words. For instance, in pantomime one may mouth the order ‘get out of here’ by forming the words. In mime you say it entirely with the body.”

They have both studied with Marcel Marceau, probably the most famous mime in the world, Judy at his school in Paris, Billy Jaye in one of his mime classes at Notre Dame from which he graduated in 1974. In fact Marceau, impressed with Billy’s latent, arranged for him to get a scholarship with the highly respected Israeli mime, Moni Yakim, in New York City. Billy studied with Yakim for three years.

How did they get involved in mime? I asked, considering the fact that there weren’t too many Black role models working in the art. This time Judy responded first. “Initially, I was mainly interested in music,” she observed, “and was attending the Interlochen Art Academy in Travis, Michigan, as a violin student. While there I also developed an interest in theatre and finally in mime. I found that mime greatly improved my acting and my ability to communicate with people. This has been helpful in my travels. When I visit countries where language is a problem, I make myself understood with mime.”

Billy started even earlier. “I’ve been performing since I was a kid,’’ he said. “My first role, back when I was six years old, was as an Indian in a school play. The character had nothing to say, but lots to do. I really found this fascinating and became interested in what one could do in silence. I used to love to watch Red Skelton on television and as I grew older, the old silent movies. When I got to Notre Dame, I joined up with a few other students and an instructor who was interested in mime.”

Billy and Judy noted that Mime has generally been a very select art form of the elite, but both insisted that it can attract larger audiences including Black ones. “Black folks have always been impressed with movement without words,’’ stated Judy, as she proceeded to show a few basic Black movements such as the hands-on-the-hips, head-rolling movement so favored by Black women when emphasizing a point, you can watch a group of Blacks talking on a corner at the other end of the block and get some hint of what they’re talking about by watching the body movement.

To further increase this potential audience, they teach mime classes around the city, which they say have been enthusiastically attended and eventually hope to open a school “where people can study all facets of the arts, especially Mime.” They also perform, mostly as a team now, all around the metropolitan area. Some of their works include a classical mime piece The Baron. From Birth, etc., deals with the life cycle, The Duel has a cowboy theme and Space Olympics is a Star Wars-type piece.

Mime is still relatively new as an art form says Billy and Judy, and still has lots of places to go. They both plan to help take it those places.