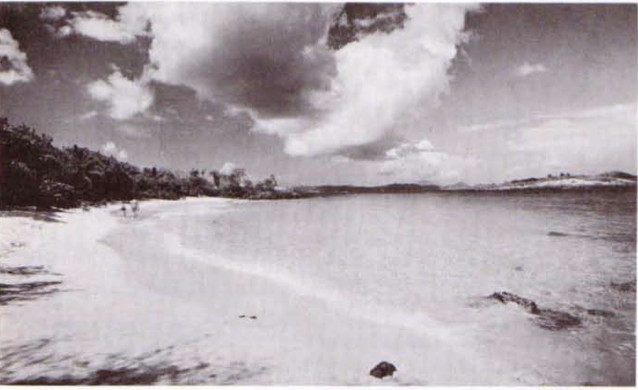 The three major US Virgin Islands — St. Croix, St. John and St. Thomas — located only a stone’s throw from the mainland — exactly three and a half hours from New York — are a home away from home for American travelers. The language is the same, but with a calypso beat; the money is the same US currency; and there is no need for a passport, only some form of identification.

Known all over the mainland as America’s paradise and as the bargain center of the Caribbean, the US Virgin Islands are just that — and more.

Because the US Virgins have been blessed with excellent year-round weather, enjoying a mean annual temperature of 78°, with sudden showers, most of the excitement takes place outdoors. Having had the world’s record blue marlin catch return to the US Virgins last year when a 1,282 pound blue marlin was caught off St. Thomas, deep-sea fishing has remained one of the single most competitive water sports. But because of the crystal clear waters surrounding the US Virgins, water sports is not limited to catching blue marlins. Sailing and scuba diving are still popular with residents and visitors alike; the former activity owing to the fact that the US Virgins are the homes of the largest fleet of charter boats in the Caribbean; the latter due in part to the opening of the St. Thomas Diving Club, a small hotel exclusively for scuba divers.

Other popular outdoor sports include golf, tennis and horseback riding.

St. Croix, the largest of the three US Virgins, 84 square miles, with a population of 50,000, has all the golf facilities, and flaunts two 18-hole championship golf courses: one at Buccaneer Hotel, the other at Fountain Valley, designed by Robert Trent Jones. For golf enthusiasts, Fountain Valley will be the site of St. Croix’s second annual Pro-Am Golf Tournament, scheduled for November 26 to December 3.

In recent years, outdoor tennis has emerged as a favorite sport with locals. It is no wonder then that in addition to the numerous tennis facilities at major hotels, some equipped with pro shops as well as in-house tennis pros, there is a sizable number of public courts throughout the three islands.

All the horseback riding in the US Virgins is done at Spratt Hall, housed in the oldest and most famous house on St. Croix. Several riding packages are available, including a summer riding program. The riding trails stretch into the backwoods of Frederiksted.

Swimming is the ideal activity for those who wish to take in a bit of the native culture while enjoying the turquoise blue waters and white sandy beaches of the Virgins.

On St. Croix, there is always a jolly Sunday afternoon crowd at Cramer’s Park beach, just a few minutes’ drive from downtown Christiansted. Known as a typical Crucian Picnic (Crucian is the term applied to citizens of St. Croix), there’s usually lots to eat and lots of music — and, whats more, lots of people to have fun with.

Trunk Bay beach on St. John, the smallest of the three Virgins, only 20 square miles, with a population of 2,000, is where the Sunday crowd gathers. Located about five minutes away from Cruz Bay, the capitol city, Trunk Bay has a natural underwater trail.

And, on St. Thomas, the capitol of the US Virgin Islands though only 32 square miles, the Sunday crowd divides itself between Magen’s Bay beach and Coki Point beach, the former acclaimed by National Geographic as one of the ten most beautiful beaches in the world. Coki Point, which sits adjacent to Coral World Underwater Park and Marine Garden, the only underwater park in the Western Hemisphere, attracts a nice grouping of island residents, who generally spend every Sunday at the Coki, obvious from their deep coconut oil-tanned complexions.

The fact that this year is an election year in the US Virgin Islands means that there won’t be a dull moment — in fact, there never is — through November 7, Election Day.

In order to raise campaign funds, political parties generally sponsor lots of social events, ranging from campaign dinners to Fish Fries, all-night outdoor beach picnics, where local dishes are prepared to the beat of calypso music. These Fish Fries run from sunset to sunrise, usually on weekends between 6 p.m. and 6 a.m. While holding a piece of fried fish in one hand and a glass of beverage in the other, people dance and talk with each other: politician and voter, resident and visitor, rich and poor.

The clocks in the U.S. Virgins don’t stop when the sun goes down and sports come to a halt; neither are things quiet once election is over. After all, there must be other forms of entertainment to keep busy the more than 100,000 residents who call the US Virgin Islands home.

Dining out under seven flags is one more thing to do. The Virgin Islands, named by Columbus for St. Ursula and her 11,000 virgins, had already been under the flags of Spain, England, France, and the Knights of Malta when the United States bought the islands from Denmark in 1917 for a mere $25 million. It is no surprise then that dining in the US Virgins is a true international experience. And in addition to the many Spanish, French and Danish restaurants, there are Chinese, Italian and Mexican restaurants, too.

Some of the favorite restaurants for non-island fare on St. Croix are Tivoli Gardens, Eccentric Egret, Comanche, Frank’s and Top Hat; for island fare, Ten Grand, Vince’s Place and Brady’s — all in Christiansted. In Frederiksted, the preferred restaurants are Smithfield Mill, Barbara McConnell’s and Swashbuckler.

The restaurant at Caneel Bay Plantation, owned by Rock Resorts, offers the most in dining on St. John. For local cuisine, Meada’s, Ric’s and Fred’s — all in Cruz Bay — are recommended.

On St. Thomas, the list of restaurants for non-island fare are Fish Market, Drunken Shrimp, L’Escargot, Harbour View and Mafolie. For hearty island cuisine, Daddy’s and Libra Brothers are tops.

Nightclub hopping is yet another exciting thing to do in the US Virgin Islands, where variety is the spice.

St. John offers very little in night life, aside from its weekly Fish Frys held every Friday night at Pond’s Mouth, within walking distance from Cruz Bay. Occasionally, there are performances by the St. John’s Steel Unlimited, a steel band orchestra of school children.

The pace is brisker on St. Croix. In Christiansted, night life varies from a sophisticated evening overlooking the waterfront at Guthrie’s, either listening to Jimmy Hamilton [Duke Ellington’s “Mr. Sax”] and his quartet, or his wife Vivian at the piano. Not far away is the Limin’ Inn, also on the waterfront, where there is a steel band from 3 to 7 p.m. Occasionally, there is weekend dancing to the music of local bands. For a late-night “lime” [“Liming” is the West Indian term for having fun], Club 58 serves omelets and hamburgers until 4 a.m. Backgammon and bridge are played every Wednesday night from 8 p.m.

In Frederiksted, Galloway’s disco plays anything from soul and rock to reggae. On the island side, Virgie’s Living Room features steel band music.

The lights in St. Thomas are a bit brighter, and the fun lasts longer. Most of the night life takes place in Charlotte Amalie itself. For late night “limers” who prefer disco music, the clubs to visit are The Cheetah, The Playhouse, Safari Lounge and Laurie’s. Then there is the Big Bamboo, on the eastern end of the island, one minute away from Red Hook pier where one catches the St. John ferry. As its name suggests, the Big Bamboo is a typical island club, and is popular with both residents and visitors.

The Pirate’s Cove at Bluebeard’s Castle Hotel, and the nightclub at the Sheraton are also recommended for local music and dancing, though on a smaller scale.

For a familiar type of experience, try the Top of the Reef at Frenchman Reef Holiday Inn. There are usually state-side entertainers, after which dancing music is provided.

There is at least one thing more to do in the US Virgin Islands before returning home: go shopping for bargains.

All in all, the US Virgin Islands: Saint Croix, Saint John and Saint Thomas offer the ultimate vacation plan. Each island is so much like her two sisters, and yet so different — only to suit your every mood. How To Get There By Air: From New York, American Airlines provides nonstop jet service from JFK to St. Croix, continuing to St. Thomas. Also, nonstop jet service via San Juan is provided by several major airlines. Connecting flights out of San Juan on Aero Virgin Islands, Air Caribbean, Antilles Airboats, Eastern and Prinair.

Where To Stay: There are any number of hotel accommodations, ranging from deluxe hotel rooms to campgrounds. Spring, summer and fall rates are slashed almost in half, while facilities remain the same.