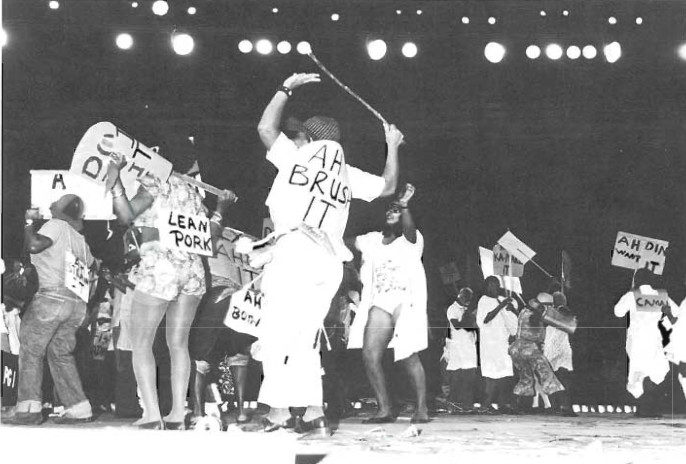 I have decided to deal with the spectacular festivities of Carnival as a kind of street theater. Since I haven’t been to Carnival in Trinidad or Brazil, the two places synonymous with Carnival, I turned to two people who had been there to help me develop my concept. Both are well qualified to do so.

Neville Richen is a Trinidadian actor living in New York City. He has participated in Carnival, both in Trinidad and on Brooklyn’s Eastern Parkway. Bill Moore, the dance coordinator of the Black Theatre Alliance, is an annual visitor to the renowned Carnival of Rio de Janeiro. He has participated every year for the past 13 years.

While I have never attended the “Big Two,” I have seen slightly different versions of Carnival. One was in West Germany during “Fasching,” the Teutonic version of Carnival in which the staid German burgher “let it all hang out” with elaborate parades and costume balls. Another experience, more vicarious in nature, was viewing  Black Orpheus, the Brazilian film classic that is filled with pulsating Carnival scenes. The most important, however,  is my annual Labor Day trek to Brooklyn to see what we novices mistakenly call the West Indian Day Parade.

What it really is (in every sense of that often misused word) is a “happening,” one that has all the elements of being true street theatre.

My conversation with Neville, who has appeared in several plays in New York City, including The River Niger, confirms my observation. He, along with Oliver Stephenson, Basil Wallace, Arlene Quiyou, Lou Ferguson and others, founded the two-year old Caribbean American Repertory Theatre (773-4713). “You are absolutely right about Carnival being a kind of street theatre,” he agreed. In fact, a few years ago a writer named Errol Hill wrote a book called Trinidad Carnival, Mandate for a West Indian Theatre. The whole thing started off as a kind of play acting by the slaves, who were imitating their owners and masters. Thus the name Play Mas, which is short for play masquerade, originated. With exaggerated clothes and mannerisms, they strutted around like they were on stage playing different characters. Continuing on this theme, Neville explained that Playing Mas is like being in disguise. Whether it’s wearing a mask, a special costume or painting the entire body, the objective of the player is to develop the character of the Mas that he or she is playing. Once Play Mas (the equivalent of Curtains Up) begins, the players must stay in character for the entire parade.’’ Just as in more conventional theatre, the ability to stay consistently in character is what separates the great players from the rest.

Neville says that the heavy emphasis on developing a character is what distinguishes the Trinidadian and Brooklyn Carnival from the others. ‘‘I have seen both Mardi Gras in New Orleans and Carnival in Brazil, but I feel that Trinidad’s Carnival and the one in Brooklyn are most unique because the people get involved so strongly that they actually become the Mas they are playing. I have seen people so absorbed in their Mas that they do things they normally wouldn’t be able to do. Once, in Jab-Jab Mas, which symbolizes the devil coming out of hell, I saw a man taking leaps that seemed to be seven or eight feet high in his devil characterizations. I don’t think he could do that any other time. In Brooklyn last year, Janelle Commissiong, the Trinidadian Miss Universe, was the Carnival’s Queen of the Bands. She was riding on a float but it was obvious that she was getting very tired. One of the players went in front of the float and danced. This brought a dancing response from her and rejuvenated her for a few more blocks. The dancer danced until he was completely exhausted and then another took his place. That’s how we kept her going until the end. It showed the power and magic of playing Mas.

Just as more conventional theatre must have a producer and director, so does the street theatre of Play Mas. In most instances, this is the role of the band leader. He is the one who puts it all together, who selects the costumes, determines what will be worn and arranges the music. Most importantly, he chooses the Mas that his side (as the individual Mas groups are called) will play during any given year. In addition to the Jab-Jab Mas, others include the Mexican Mas, in which all the players wear huge sombreros; the Wild Indian Mas; the King Richard the Lion Hearted Mas; the Bird of Paradise Mas, with spectacularly beautiful costumes depicting “paradise;” and the Moku Jombie Mas in which all the players wear stilts. All of them are like improvisational mini-plays. According to Neville, every time the music stops, the players improvise scenes.

Where Carnival in Trinidad and on Brooklyn’s Eastern Parkway is a combination of music, dance, drama and comedy, the one in Rio is more like musical theatre performed in the streets. Bill Moore says ‘‘I regard it as a large, musical happening in the street with emphasis on remarkably beautiful and elaborate costumes and non-stop, exciting dancing. Rio’s Carnival parade features the 10 major Samba schools, each of which has up to 2,000 members. Each school has a theme and a theme, song which is adhered to in its Carnival presentation. All themes must deal with a national subject and often dramatize Black Brazilian history. Two themes I especially remember dealt with Queen Isabella freeing the slaves and with Quilombos and Palamares, which were states in the Brazilian interior that Black people controlled and lived in as free people during slavery. After years of fighting, they were finally conquered by the Portuguese. Through their costumes, songs, dances and by using pantomime, the participants act out the themes of their Samba Schools, providing a kind of moving musical theater that “can’t be matched anywhere else in the world,” Bill stresses.

So, in September, when you are watching the Labor Day festivities in Brooklyn or attending Carnival in Trinidad or Rio in February, pay close attention. Not only will you see a colorful parade, you also will see entertaining, exciting and informative theater.