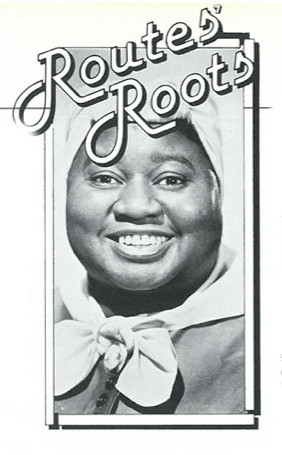 “The eternal Mammy — The faithful maid.” Hattie McDaniel was the film world’s domestic stalwart in white folks homes for more than 20 years. She raised and loved their children, prepared their meals and worried about their problems. She hovered over white lives, seeming unconcerned about her own life.

Hattie McDaniel’s dream had been to sing in Hollywood musicals. But in Hollywood in the thirties, what other roles were available to a dark-skinned Black woman lacking refined facial features, with short, kinky hair, and who weighed 275 pounds? Her options were very limited.

Hattie McDaniel was born in Wichita, but when she was still quite young, the family moved to Denver. Her father was a minister, her mother, a singer.

When she was 15 years old, she won a medal in dramatic arts from the White Women’s Christian Temperance Association. And she worked in Denver until 1924, when Professor George Morrison persuaded her to join his orchestra for a nationwide tour designed to capitalize on the growing popularity of Black performers. She stayed with the orchestra for just a short while before leaving to form her own act in Kansas City.

Her most impressive stage performance was in Show Boat. But although her popularity had soared, jobs were scarce. At 26, she hit a spiritual and professional low. Broke and stranded in Milwaukee, she was forced to take a job as a ladies room maid in Sam Parks’ Suburban Inn.

But fate works in strange ways. One night, a performer became ill and Hattie volunteered to pinch hit. She sang St. Louis Blues and became the instant star of the floor show.

Hollywood, 1933. She was given a small part as the maid in The story of Temple Drake. She repeated the role in almost 300 films.

But Hattie McDaniel added new dimensions to the role of maid. Her characters were energetic, creative, and sometimes sassy.

Alice Adam, 1935. She chides Katherine Hepburn and Fred MacMurray about putting on airs for dinner guests. Show Boat in 1936 found her talking back to a white deck hand. In Saratoga, 1937, she established a good rapport with Clark Gable and Jean Harlow. By 1938, roles were being tailored to fit the McDaniel style.

In 1939 in Gone with the Wind — an adaptation of a novel about the Civil War — Hattie McDaniel, as Scarlett O’Hara’s mammy, delivered her most outstanding performance. She was involved in every vital aspect in the film. With a special kind of humor and a grandiose, self-righteous style, she stamped an indelible imprint on the film. And her performance won her an Oscar from the Academy of Motion Picture Arts and Sciences.

Awards night. Draped in white ermine, white gardenias in her hair, Hattie McDaniel gripped the coveted Oscar in her beautifully manicured hands and walked away from the ceremony amid bursts of cheers and applause.

Hattie McDaniel was a character actress. As a professional, she didn’t try to justify her acting assignments; she sought to give honest, skillful portrayals of her characters. Constructing memorable, celebrated characters out of the same old roles was no small feat. The public she played to was convinced that she was a “natural” as a maid.

The white audiences’ attitude was easy to understand. As they looked upon Hattie’s smiling, round face as she waited on her employers, they assumed she was meek and compliant. They glossed over her subtle, sapient qualities in order to preserve their menial image of her.

But her Black audiences were her strongest critics throughout her career. Many Black civic organizations publicly denounced her for portraying Negroes as menial workers.

When critics and Black reporters questioned her motives for accepting roles as domestics, she would answer, “It’s better to earn $7,000 a week playing a maid than earn $7 a week being one.” Before her death in 1952, Hattie McDaniel was headlined in the Golden Dozen of film greats. Time has proven her greatness. Enlightenment has quieted her critics.