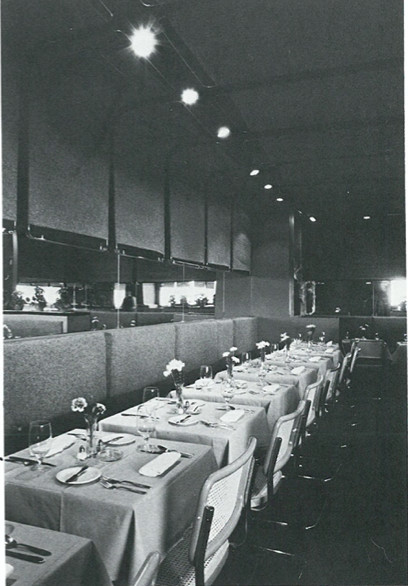 Paris has its Champs-Elysées; London, its Park Lane; and Rome, its Via del Corso; but from coast to coast, America boasts hundreds of Main Streets, for Main Street is that thoroughfare that other streets — if streets could dream — want to be.

This is part of the concept of Main Street, 75 Greenwich Ave., N.Y.C. 929-1579, one of New York’s newest restaurants. Through experience and research, owners David “Garnish“ Daly, Andrew Hoffman and Jeffrey Weisman concluded: American cooking is as distinctive as other cuisines of the world; it even has regional distinctions. They have divided the continental United States into six divisions — New England, Southern, South Western, Mid-Western, Creole-New Orleans, and Far Western regions.

By way of their menus, you can take an epicurean excursion to other parts of the country each evening; for each evening there is a menu characteristic of one of the six regions. But what comes to the table may not always be that particular region’s most renowned dish. An example is the menu offered the night I stopped in — New England night. No, it was not New England boiled dinner. There was, as there always is, a choice of two entrées, broiled scallops or scalloped oysters.

I chose the scallops broiled in lemon and butter, which the menu described as “succulent bay scallops”; and succulent they were, so much so that I found it unnecessary to garnish with lemon juice.

All entrées are served with rice or a baked potato, a seasonal fresh vegetable from the highlighted region. The regional vegetable served when I was there was Maple Baked Acorn Squash. Now the acorn squash is a vegetable I’ve not liked or trusted since my introduction to it many years ago when it fooled me into thinking it was a yam. I won’t say Main Street’s Acorn Squash made me a fan for life, but my fork kept going back to it until I’d eaten nearly all of it. This is no small tribute to the young Black man who has domain over the kitchen, Chef Herb Winton.

Of course any meal in a restaurant has a beginning, the appetizer, and an end, coffee or liqueur. Main Street serves no appetizers; they serve what they call a “warm up.” Shortly after David Bond or one of the other pleasant waiters/waitresses places your warm-up before you, Jeffrey Weisman may very well stop by your table to explain what warm-up is all about. He explained to me “appetizer” is a concept borrowed from Europe. In keeping with their philosophy of serving authentic American food and because most diners expect an appetizer, they created the warm-up, which on that night was a small, hot corn custard. It took some getting used to, but I’ll bet it was a hit at Plymouth Rock! Also, on the New England menu was a hearty and very tasty clam chowder, a salad with an avocado yogurt dressing, and Boston Cream Pie.

Realizing that all taste buds do not travel the same route, Main Street also offers nine outstanding entrées, one of which is the Vegetarian Special. Their entrées, including the regionals, range from $6.50 [the Vegetarian Special] to $15.75 [the Classic 16 oz. Steak], Soup and dessert are additional [$1.00 and $1.75] as are beverages.

A good selection of domestic wines is available, including a champagne. There is bar service along with table service. With such an all-American theme, one might expect Main Street’s decor to be red, white and blue with a marching-band serenade. However, the ambience is serene and simple, bordering on chic. It is a very comfortable room for dining and conversation. A double window wall eliminates all outside noises from this street level restaurant. Enhancing the mood is music, pre-taped by the owners, which include Dinah Washington and George Benson. Main Street is a delightful change of pace and a long overdue step up from the hamburger and hot dog, which has too long personified American cuisine. It would not be surprising if, like its namesake, all routes eventually did lead to this restaurant.