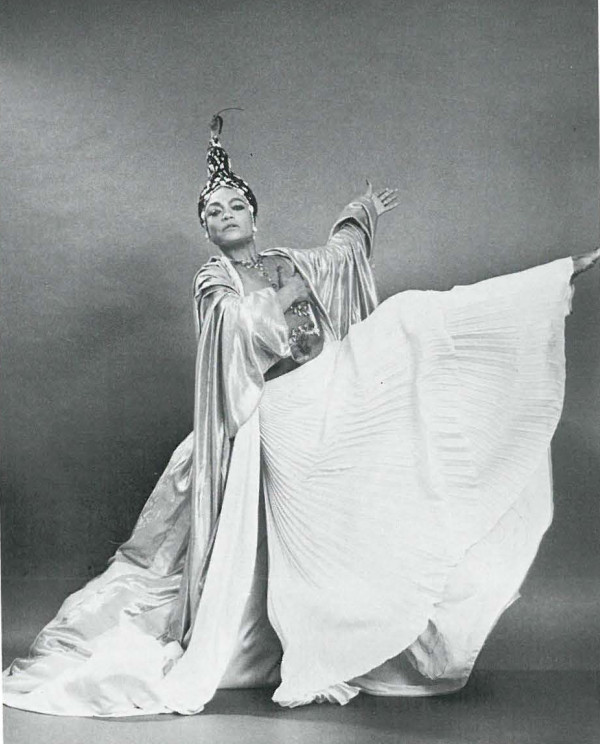 According the American Heritage Dictionary, one of the definitions of “legend” is: “A person who achieves legendary fame.” Eartha Kitt, now appearing on Broadway in the musical Timbuktu!, is an entertainment legend. A look at her life and accomplishments over the past 30 years tells why.

Ms. Kitt’s illustrious career has spanned theater, dance, films, nightclubs, television and recordings. A true international star, she has performed in over 100 countries. To this day, attendance records when she appears in nightclubs such as The Persian Room in New York City’s Plaza Hotel, London’s Talk of The Town and Hong Kong’s Mandarin Hotel have never been broken. She speaks nine languages and sings in fifteen. She has danced with the famed Katherine Dunham Dance Troupe, performed on stage with Orson Welles (who called her “the most exciting woman in the world”) and starred in films with Sidney Poitier and the late Nat “King” Cole.

Over the years, she has received a Grammy nomination; an Oscar nomination for her role in Anna Lucasta; and a Tony nomination, Broadway’s equivalent of the Oscar, for her role in the drama, Mrs. Patterson. She has performed in musicals, comedies and dramas, including two successful stage appearances in London. She has written an autobiography, Alone With Me, and is currently working on two more nonfiction books. For a while, she regularly appeared on the Batman TV series as the infamous Cat Woman. She has conducted a dance workshop in Watts for more than ten years — its purpose is “to help children and young adults develop discipline in mind and body through dance.” One of Ms. Kitt’s proudest moments was in 1974, when three of her students won feature roles in a musical in which she starred. Finally, she has been politically involved enough to have caused a former US President to use his immense powers to block her from getting engagements in prestigious nightclubs and concert halls throughout the country, including places which had previously welcomed her.

Ms. Kitt, who laughingly calls herself an “urchin cotton picker from the South,” is indeed a legend, and it was with this is mind that I went to interview her in her 41st floor co-op apartment in one of NY City’s swankiest residences. A smiling, petite Ms. Kitt opened the door, gave me a warm hello and invited me into her huge, comfortable-looking apartment. Its most striking feature was the two walls of windows that provided a mind-blowing view of the City below. She was casually dressed in black slacks, brown sweater, with a scarf wrapped turban-like around her head. With her was daughter Kitt, 16, and a huge, friendly St. Bernard named July.

Ms. Kitt has definite views of herself. “I think that I am indescribable. The reason I say that is that I don’t regard myself as one particular thing but as a variation of things and therefore a variation of all races.”

I asked Ms. Kitt about “famous” White House luncheon in 1968 when she had been accused of sassing the First Lady [Ladybird Johnson]. She began by relating how she happened to receive an invitation to a White House luncheon where the subject for discussion was juvenile delinquency, its causes and treatments. After all, she was known as Eartha Kitt, artist, entertainer and sex symbol.

She explained: “At the time I had been working with youths in Watts for a while and I had also become involved with a group in DC called Rebels with a Cause [She was in DC starring in The Owl and the Pussy Cat.] They attempted to help young people find jobs and had approached me for aid in reaching out to politicians and other public figures. I brought them to the attention of a friend, Rep. Roman Pucinski of Illinois, who in turn enlisted the aid of Senator Hubert Humphrey. With their help a meeting was set up in a DC school between some politicians, poverty program officials, students and community people. It was this background that got me invited to the luncheon, not as an entertainer, but as an informed and concerned citizen.”

The luncheon, to put it mildly, did not turn out as Ms. Kitt had hoped and expected. “I really believed that their aim was to seriously deal with the subject, but I soon found out that it was more of a tea party set up to offer Band-Aid solutions to a cancerous situation. When it was my turn to speak, I asked Mrs. Johnson, in what I considered a calm voice, if she didn’t think that some of the problems we were having with our youth might have something to do with the war in Vietnam. I was thinking of monies being taken away from social programs to support the war and of the many young Americans that I had met in my tours abroad who had left rather than fight in what they considered an immoral war. When I finished, Mrs. Johnson stood up and said: ‘Miss Kitt, just because there’s a war going on doesn’t mean that one can’t act in a civilized manner.’ I didn’t detect any hostility in her voice. What really horrified me was another woman who stood up and told me that she had eight sons and that she would gladly send them all to fight in Vietnam. I remember feeling sorry for her sons. However, still another woman leaned over and whispered to me that many of the women present supported what I said but couldn’t say so because most of their husbands worked for the government.”

Ms. Kitt said she thought very little of the affair after it ended since it hadn’t appeared hostile and since no press was supposed to be present. “Yet I found out later that less than two hours after the luncheon ended, word was out that I had insulted Mrs. Johnson and that President Johnson had called people around the country telling them that I was to be considered persona non grata.” She insists that from 1968 to 1975 she never knew or even suspected that the government was behind the campaign to keep her out of the major clubs and concert halls.

“It may sound naive but I never thought that the government would do such a thing, especially over such a small incident. Deep down I knew something was going on when I couldn’t get bookings in places that I had always appeared in before. My agents would tell me that there were problems, but they never said what the problems were. I used to tell my good friend, Albert Popwell, that something was wrong with my telephone and that sometimes, when I came home after a tour, I had the eerie feeling that someone had been in my apartment. But Poppy would say: ‘Kitty, you are just into your voodoo thing!’ Finally in 1975 Seymour Hersh of the N.Y. Times called me and said that he had gotten hold of a government dossier on me and that he wanted to read it to me before using it. The word ‘dossier’ initially frightened me, but when he finished reading, I really couldn’t believe some of the stuff they had compiled. It was nonsense, absolute nonsense. I thought to myself, here I’ve been paying taxes to a government to libel and defame me. That was spooky.”

This past January, for the first time since the infamous luncheon, Ms. Kitt received another White House invitation. “I was a little shy about accepting, but I’m glad I went. It was almost ten years to the day from the other luncheon. For a fatalist like me, that was a significant fact. When the press asked me how I felt, I wanted to throw back my arms and yell out won-der-full! But then they probably would have called me crazy, so I played it cool.”

As for Mrs. Johnson, Ms. Kitt says their paths haven’t crossed since the luncheon, but “Rep. Pucinski told me that Mrs. Johnson had expressed wonder as to what the fuss was all about. ‘All Miss Kitt did,’ she is supposed to have said, ‘was to express an honest opinion;’ so maybe she had nothing to do with what happened.”

When I asked Ms. Kitt to talk of her favorite performance over the years, she replied, “Every performance is just as important as the next one. But it might be a toss up between two performances I gave three years ago in NY City at Avery Fisher Hall and Carnegie Hall. After not performing there for such a long time, it felt good to be back; and the way the audiences responded to me brought on a kind of realization that we really loved each other. When the public says “Yes,” you have paid your dues. Now here’s your payment; there’s no feeling like it in the world. I realized that it was all worth it. For the first time, I felt that I no longer had to audition to prove my worth. Since my childhood I was rejected; then later, most people still seemed to reject me, so every step I took was a fragile one. The love that I felt from the audiences at those two concerts made me feel finally that I was now accepted for what I am. It is through my artistry that I have learned that there is a reason for my being here.”

As for Timbuktu!, Ms. Kitt said she “loves the show” and predicted a long run. She had nothing but praise for her co-performers or the “kids” as she called them. “They are all pros who have worked hard to make the show a success. As for myself, Sahleem-La-Lume is a dream role. The writers told me they had spent 20 years looking for the right person for that role; and all the time, I had been practically under their noses.”