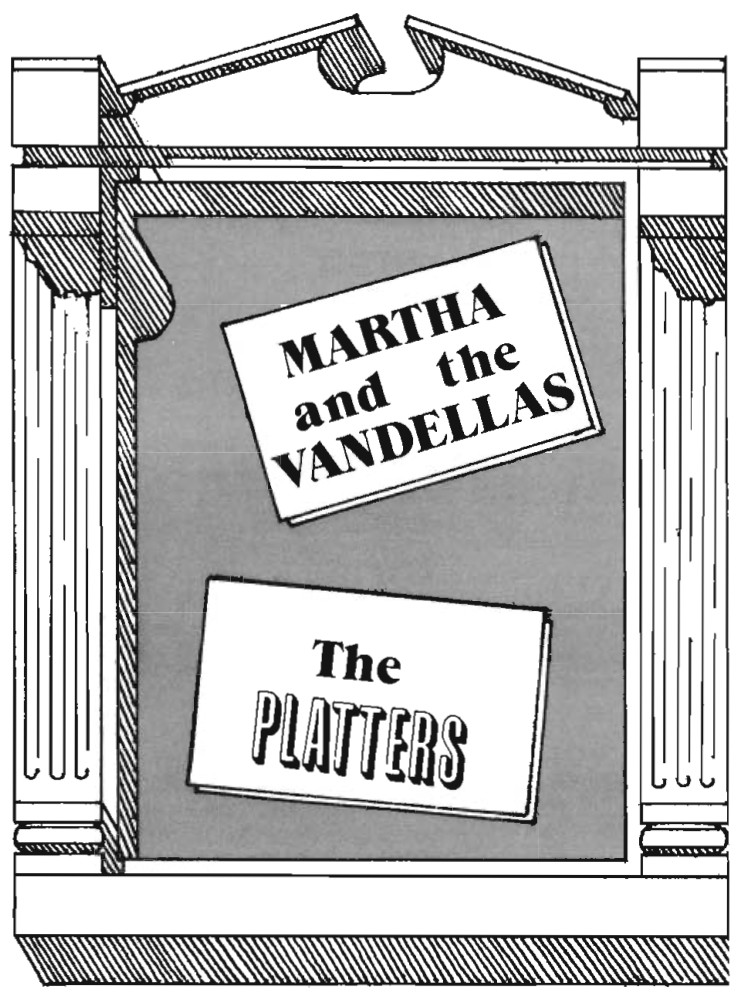 The Marquee read, All-Star Show Featuring The Temptations, Martha and the Vandellas, the Marvelettes, Billy Stewart . . . and on and on went the list of acts. Every week introduced a new show and new excitement for all who waited on long lines that sometimes would wind its way up 125th Street and around Seventh Avenue. This was the Apollo Theatre.

The Apollo Theatre in Harlem was the mecca of Black entertainment for over a quarter of a century. Some of the biggest names in show business performed in this illustrious palace — Billie Holliday, Louis Armstrong, Cab Calloway, Ella Fitzgerald, Ray Charles, Aretha Franklin, Al Green, Nancy Wilson, among many others.

Every major city had their own “Apollo Theatre.” In Philadelphia, it was the Uptown, in Chicago, the Regal, in Washington, DC, the Howard Theatre. Even Brooklyn had the Fox; but there was none that could match the prestige and excitement of the Apollo.

In 1935, Frank Schiffman took over its management and brought notoriety to the theatre during the Harlem Renaissance. During that era, Harlem was the center of entertainment and the big band sound was the “in” thing. Virtually every known Band from Count Basie to Benny Goodman played the Apollo. Dancing acts were the highlights of many shows, and dancers like Bill “Bojangles” Robinson, Stepin’ Fetchit’ and Sammy Davis Jr., [whose career began as a dancer] came to dazzle each other with their fancy footwork. 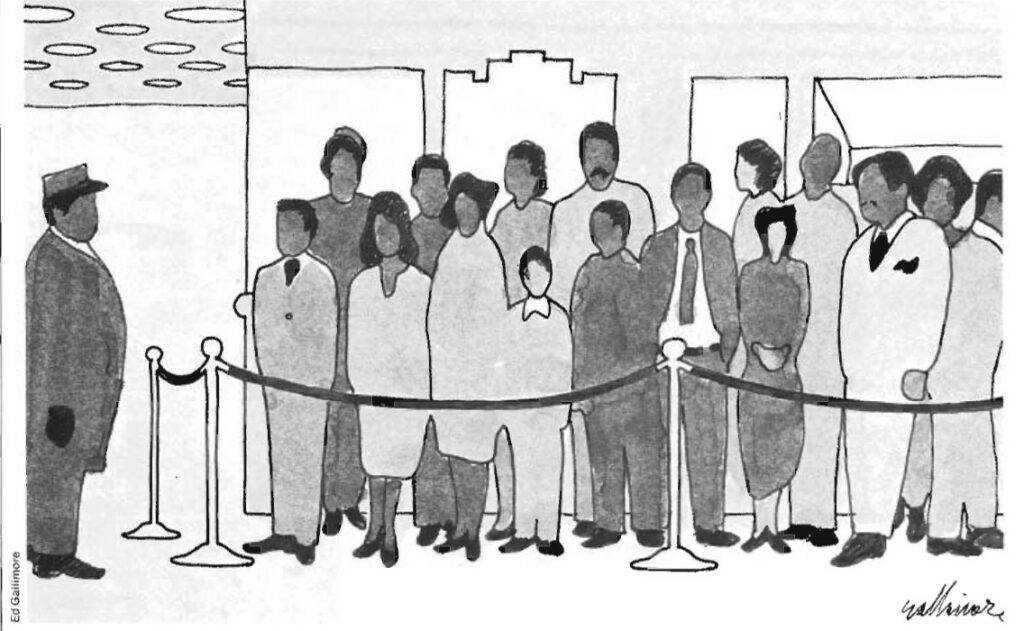 The Apollo survived the riots of 1943 and 1963 because community residents guarded the theatre. As the exterior of 125th Street deteriorated, the Apollo managed to stay the palace of the neighborhood. In 1968, the lobby of the theatre was refurbished, and it gave a sense of pride to those who considered the Apollo their second home. Then, we could buy a $2.50 ticket and sit from the first through the last show, enjoying the performances more each time.

Some of the unforgettable scenes associated with the Apollo during the 1940s were the never-ending lines of people waiting to get into the theatre. Watching the sights on 125th Street, a treat in itself, would help pass the time. We would see current fashions and fads — two shows for the price of one! On Easter, we didn’t need Fifth Avenue for the Easter Parade, we had 125th Street and the folks on line at the Apollo! They’d be dressed to kill in black-seamed Stockings, spiked heels, shoulder-padded suits waiting to see Ella, the Count, Lena, Ethel Waters, the Duke or Pearl.

Vaudeville also was popular in those days, and the Apollo featured some of the funniest — Jackie “Moms” Mabley, Pigmeat “Here Come Da Judge” Markham and Red Foxx with his sidekick Slappy White. The 1950s brought bobby socks, saddle shoes, slick processed hair, the slop, the stroll, the twist, the mellow sounds of Dinah Washington, Sarah Vaughan, and Nat “King” Cole. The 1950s also brought the “doo-wop” sounds of Sonny Till and the Orioles, Shep and the Limelighters, Little Anthony and the Imperials, the Cadillacs, Jackie Wilson, Sam Cooke, the Platters; and the girls fell out of their seats over the smooth sounds of Johnny Mathis. The 1960s brought mini skirts, the boog-a-loo, the Drifters, Dionne Warwicke, Wilson Pickett, Otis Redding, Billy Stewart, Patti and the Bluebells [later to become LaBelle].

The 1960s also brought the Motown Sound. And Apollo featured history-making shows headlining the Supremes, Marvin Gaye, Stevie Wonder, The Temptations, the Marvelettes, Martha and the Vandellas, The Four Tops, The Spinners, Smokey and the Miracles, Gladys Knight and the Pips, the Jackson Five – sometimes all would be on one show! Those were the great days of the Motown era.

James Brown always packed them in with his star-studded, power packed renditions of If I Ruled the World, Say It Loud, I’m Black and I’m Proud, Mother Popcorn, Sex Machine and his finale of Please, Please, Please, where he’d fall to the floor like a madman and have the emcee drape a sequined cape around him. Remember the roar of the crowd?

The Apollo audience was one of the most critical for which any entertainer could perform. This was an audience that could either make an artist or break one. If the audience didn’t think well of a performer, the reaction would vary from shouts of ridicule to raucous laughter. But if an artist got over, the applause was overwhelming. During the middle of a song, shouts of “sing it baby” or “yeah, yeah” would roar from the second balcony, which many times was occupied by drunks. If a performance was not up to par, the audience would sometimes refuse to applaud. The Apollo was a legend in itself.

Wednesday nights became synonymous with the Apollo, for it was amateur night and it gave many aspiring artists a chance to either be discovered or forced them to go into hiding, depending on audience acceptance. Amateur night alternately was like watching an execution or watching a coronation. Anyone who thought they had talent could sign up in the basement of the theatre. The basement looked like a condemned playhouse — dusty floors, cobwebbed corners, out-of-tune pianos, dusty life-size pictures of Sarah Vaughan, Gladys Knight and the Pips and various artists who have performed at the theatre. That alone should have been enough to scare an amateur. Then came the audition, where you brought your own backup and arrangement or sang a cappella. 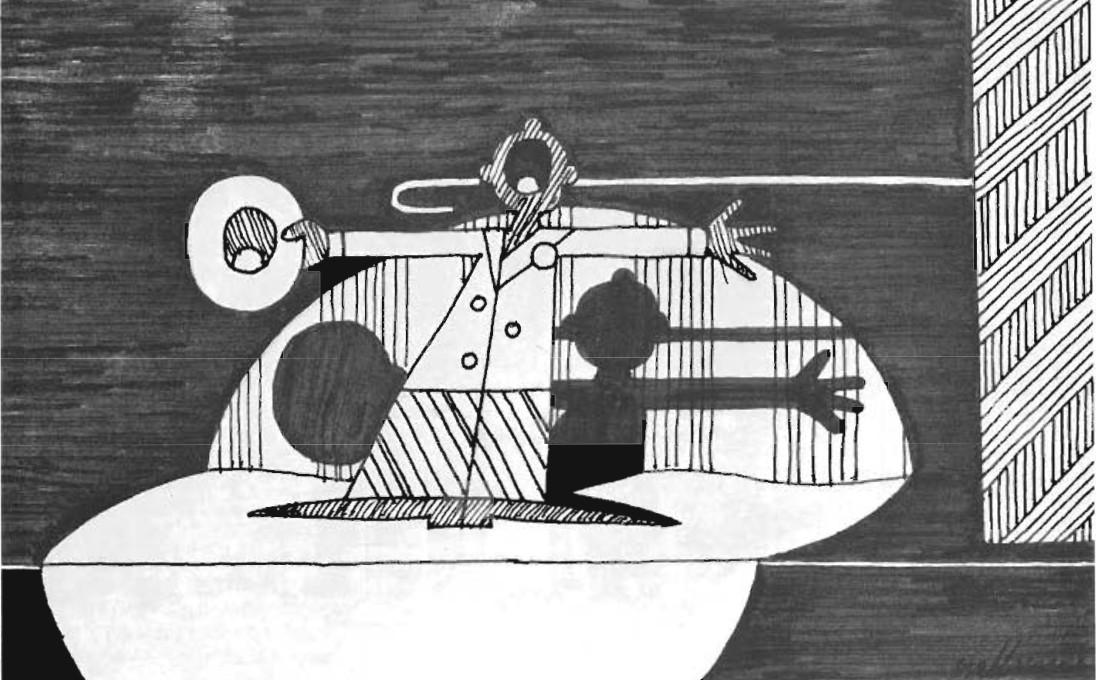 WEDNESDAY NIGHT — The Amateur Show began after the evening headliner show, with the audience waiting like vultures to prey on its victims. One thing could be said for the participants of the show — they had guts! If a performance was good, the audience would give it a good benefit-of-the-doubt applause. But if the performance was unacceptable, in addition to the laughter from the crowd, sirens would go off, a clown would run across the stage shooting a cap pistol, and finally came The Hook, [a long stick with a hook on the end] to drag the performer off the stage. It was humiliating, and sometimes funny, but this was an Apollo tradition.

For all of this, first prize would be a week’s engagement at the theatre; second and third prizes would be $15 and $10. Some of the world’s most noted entertainers got their start at Amateur Night, including Sarah Vaughan, Billie Holiday, Leslie Uggams, Joe Tex, King Curtis, Vivian Reed, Tommy Hunt, Maxine Brown, Roy Hamilton, Barbara McNair, Jackie Wilson.

The Apollo became a legend in its time. Walking past the theatre, now closed, one can almost hear the screams and shouts of the enthusiastic audience, the smells of popcorn and hot dogs in the lobby, feel the excitement of the audience as the band began preparing for the first performer. And now it’s star time.