“We’re not dead and I don’t believe we will die. At least not anytime soon. But we did suffer because they choke and stifle their artists. That’s what they did to us, and that’s why we split.”

The speaker is Melvin Franklin. The they is Motown Record Corporation. The us is the Temptations, the group he’s been singing with for the past 17 years, the group that helped make Motown.

But where is Motown today?

In the sixties, Motown was the mecca for Black performers who had a craving for the big time. Now, ironically, Motown has become the pits. Acts that once were synonymous with Motown have been leaving fast. And with the exception of the Commodores, big-name Black acts are reluctant to deal exclusively with Motown. Motown Exodus is the buzz in the industry.

The movement began in 1970, when the Isley Brothers left and struck gold on their T-Neck label. After that, the exodus began in earnest:

Amidst all the movement were rumors that The Temptations were outraged by the shabby treatment they were receiving from Motown. Berry Gordy, Motown’s founder, repeatedly tried to squash the rumors, but too much was happening. The coup by the Jacksons coupled with the contract worth $13 million that Gordy gave to Stevie Wonder to keep him from jumping to Clive Davis’s Arista records was the turning point.

In May 1977, The Temptations made their move. They signed a worldwide contract with Atlantic Records and quickly recorded their Hear To Tempt You album. The five Temptations — Louis Price, Glenn Leonard, Richard Street, Otis Williams, and Melvin Franklin — feel good about the album.

When I met with them recently in their New York Sheraton Hotel suite, the Temptations didn’t appear to have regrets about their sudden divorce from Motown. They were joking and carrying on about everything from women to Buffalo in the winter [which as Richard Street cracked, laughing, “Lasts all year up there.”]

They looked like anyone but the Temptations. For some reason, I had expected them to be wearing the flamboyant stage outfits I’m used to seeing. Richard’s red turtle neck sweater, blue jeans, and straightened “do” made him look like one of those Times Square Street dudes. Louis Price, the newest member of the group, looked just the opposite. Dressed in conservative pants and a sports jacket, he looked just like the Chicago school teacher he was.

Melvin, 35, and Otis, 36, are the senior members of the group, and the only members left from the original Temptations. They are the group’s spokesmen. 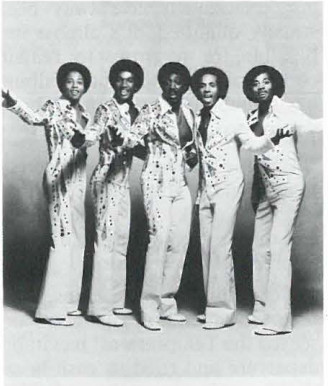 Although they said they are glad Atlantic Records gave them a chance to be reborn, they spoke more of Motown than they did of Atlantic — and very little of it was positive.

“At first it was like a marriage made in heaven. Then the company got bigger and bigger and began to treat people the wrong way. A very wrong way! It just wasn’t right, and we wanted out. We needed out. They were killing us there. We weren’t even dead and they were already shoveling the dirt.”

Otis was restrained in his criticism, but Melvin was more direct and to the point. In his deep bass voice, he picked up where Otis left off.

“Yeah man, you have to dig what was really going on there. It was a heavy scene. Since the time E.K. [former member Eddie Kendricks] split in ’71 to do his thing… well, it really goes back to when David Ruffin left the group in 1968. People have been accusing us of constantly splitting up the group. That’s right, that’s what they’ve been saying. But that’s just not true.

“Actually, Motown tried to ruin the Temps. With the exception of one guy [Kendricks], all of the people who left to do their own thing left because Motown told them they’d be better off solo.

“Why would Motown tell them that?” Melvin continued, ” … well, let me run it down to you this way. Think of it in terms of a pie. You have this pie and there are four or five pieces in this pie. The first time the pie is made, you sell it for fifty cents, but the pie is so good you later realize you could sell it for more. So what you do the next time is this: You cut it into little pieces and try to sell each little piece for the price of the whole pie. Check it out. That’s what was happening. If you noticed, all the people who left the group just happened to decide to sign with Motown for their solo careers. Do you think that’s just a coincidence? Ain’t no way, man!”

Most of the acts that left Motown have been criticized for leaving the only significant Black record company to sign with white-owned companies. When I asked the Temptations if they had any misgivings about following that route, Melvin’s eyes bugged even more than usual.

“No!” he said emphatically. “Not at all. You see, what you have to understand is that our decision to leave had nothing to do with Black, yellow, beige, brown, or purple. It had to do with treating people like people.

“As a matter of fact, Joe Jackson, [father of the Jacksons] called me and said he received a lot of static when he pulled away. People were calling him and saying things like, ‘Joe, how could you take your family away from a successful Black enterprise and sign with a white organization like Columbia/Epic? But the people who were asking these questions were unaware of what was happening. You can’t judge a book by its cover. You have to be on the inside to know how things are really shaking down.”

“What you have to understand,” Otis continued, “is that when Atlantic offered us the opportunity to sign with them, we were treated with respect. We were treated courteously. Wasn’t no shaky happening. Everything was right up front and we appreciated that because what we had just been through… .” His voice trailed. “I don’t even know what to call it, but whatever, it was rough. And it was totally unnecessary. They just didn’t know how to treat us like people.”

Unlike the other acts that left Motown, the Temptations are in the awkward position of trying to make a comeback — an embarrassing position for a group of their caliber.

In 1972, the group earned a gold record for their album, Masterpiece, and a platinum record for their nationwide hit, Pa Pa Was a Rolling Stone,which won them the 1972 Grammy Award for the Best Rhythm & Blues Performance by a Group.

Another album, All Directions, also went gold. And in 1975, their critically acclaimed album, A Song For You, went gold almost immediately after it was released. It was their last successful album on the Motown label.

Otis was eager to explain how the group got into its present comeback position.

“Melvin and I go back a long, long way. We were singing together as the Distants, and E.K. and Paul Williams, [committed suicide] were with a group called the Primes. The four of us, along with Elbridge Bryant, merged the two groups into one and became the Temptations in the early sixties.

“David Ruffin came in ’64 to replace Bryant, and we had our first big hit, The Way You Do The Things You Do. Then we did My Girl in ’65 and had our first gold record. We were on our way.”

To say they were on their way is putting it mildly. Following My Girl was a string of Top 10 hits that included Ain’t Too Proud To Beg, Beauty’s Only Skin Deep, Get Ready.” In 1968, David Ruffin decided to go solo and was replaced by Dennis Edwards. Melvin says that was when the internal problems began.

“All outward appearances suggested that we were doing fine, but too many things were happening inside the group. E.K. left in ’71. I never thought he’d leave. At any rate, Richard joined us then and Damon Harris replaced Eddie. Then in ’75, Damon left and that’s when Glenn joined us. Then Dennis split in ’76; we replaced him with Louis. Although all of our replacements have always been equally qualified, it’s almost impossible for a group to remain consistent when every other album has somebody new on it. It just doesn’t work.”

But the question still lingered: How could a group with such an excellent track record be forced into the position of having to make a comeback?

According to the Temps, Motown is at fault. The company sensed the Temptations’ inevitable departure and tried to cash in on the group’s name by releasing shoddy albums like Wings of Love and House Party that sealed the fate of the Temps. By the summer of 1976 the word was out: The Temptations were down for the count.

But in switching from Motown to Atlantic, the Temps managed to get back on their feet before the count reached 10. “It’s not easy and it’s not a nice feeling to have to make a comeback after being on top for so long.” Richard says; “it obviously doesn’t feel good. There are a lot, and I mean a lot, of good groups out there doing our thing, and doing it well. But we’re professionals, and as professionals we have to deal with things realistically. The only thing we can do is do our thing the best we can.”

“That’s what the Hear To Tempt You album is all about. We went in the studio and did our best. We’re confident that the album will sell, and all that remains to be seen is how well we’re received by the people out there. The people out there made us what we are today, and we owe them a lot of thanks. Those same people will make or break us now. Our future is in their hands. But, hey, we’re gonna keep on doing it the best way we know how and see what happens.”