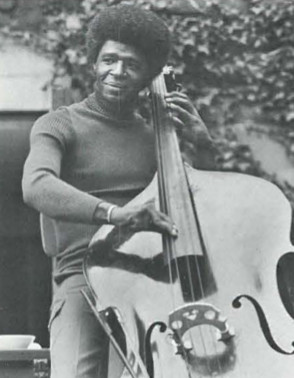 Musician’s Musician: “I just want to get better, I want to become a master on my instrument.” This is bassist Charles “Buster“ Williams‘ definitive response to questions about plans for the future. Buster’s talents are highly respected by jazz aficionados and performers alike — many of whom already consider him “The Master” of the acoustic bass.

A native of Camden, NJ, Buster has been playing the bass for almost twenty years; his father, a bassist and drummer, was his first teacher. Although Buster studied briefly with Gerald Wiggins at the Combs College of Music in Philadelphia, he is primarily a self-taught musician. Earning his living as a musician since the age of 17, Buster went on the road with Gene Ammons and Sonny Stitt in 1960, right after he graduated from high school.

Despite his international reputation, Buster is relatively unknown outside of jazz circles. Yet many people have heard him play without being aware of it. “I spent a lot of time behind the scenes … playing in situations where you wouldn’t expect the bass player to stand out.” Until his four-year stint with Herbie Hancock, Buster spent nine years backing singers, among them Nancy Wilson, Sarah Vaughan, Dakota Staton and Betty Carter. But Buster isn’t worried about receiving public recognition. “I’m just concerned about always being totally true to myself about my music.”

Buster credits his practice of Buddhism — as a member of the Nichiren Shoshu sect — with providing the insight that has enabled him to put his music into the perspective. His ultimate goal is to achieve absolute happiness through chanting Nam Myoho Renge Kyo. In striving for this goal, Buster says that his life — including his music — will definitely blossom.

…And all that Jazz

Newport‘s loss is New York‘s gain. The Newport Jazz Festival/New York, which moved to the metropolitan area six years ago, is celebrating its 25th anniversary. From June 23rd through July 2nd, the giants of jazz will be performing all over the city. Among the highlights will be the inauguration of outdoor events in Saratoga Springs, NY

“The day-to-day micro- and macro insults that are a part of the Black experience in this country, coupled with the psychological stresses that other Americans face, make the life of the American Black particularly stressful. But then, American Blacks have their own special strengths as well. All of this must be understood and integrated into the traditional psychiatric theories and practices in order to successfully treat the Black client. The result: an expanded concept of competence for the staff delivering care and treatment with components that are new or traditional, but with a particular responsiveness to Blacks.”

“There is still a lot to be learned about how to best deliver mental health services in a community such as the one we serve. However, we do know that we must develop a system of care that can be integrated into existing formal and informal community networks. Our staff must also reach out and teach as well as provide direct services if we are to help individuals and families in the community use their strengths to manage their stresses and realize their full potential,” says Dr. Richard G. Dudley, Medical Director.

A four-fold expansion of the present program is planned. In addition to an expanded adult out-patient department, new services will include:

The African American Institute, 833 United Nations Plaza. Works by 13 Senegalese artists, including such internationally famous artists as Ansoumana Diedhiou, Mood Niang and Abdoulaye N’Diaye. The works include 21 tapestries handwoven from woolen yarns at The Manufactures Senegalaises des Arts Decoratifs, a workshop in Thies, Senegal. Each tapestry has been designed by a leading Senegalese artist. The exhibition runs through June 18th.

Keep An Eye Out For “Youngblood”

Commercials Go To the Movies: Now you’ll have to take your movies with commercials and just be thankful they’re positioned between showings of the feature and not in the middle. Project Commercial, which has been tested nationwide for the past year-and-a-half, will be launched full-scale throughout the east. Millions of movie-goers will see up to three minutes of specially produced commercials for nationally advertised products before the feature begins. Backers of the project contend that the income they produce will keep admission costs from rising. “We can no longer make up for poorer grossing films,” says Ron Lesser, East Coast representative for Cinemavision, Inc. Anyway, it’s a terrific market for advertisers.

Artists of Tomorrow…young people from the community, ages 6 to 17, exhibit paintings, drawings, collage and who participated in the Washington Heights Art Show in Fort Tryon Park last summer. June 13- June 30.

Membership is available, and it entitles you to special discounts and access to all the clubs and their affiliate organizations.

The entertainment completes feature — in addition to disco dancing — shows by top-notch entertainers, games, including backgammon, chess and electronic games. The facilities also are available for benefits, receptions, private parties.