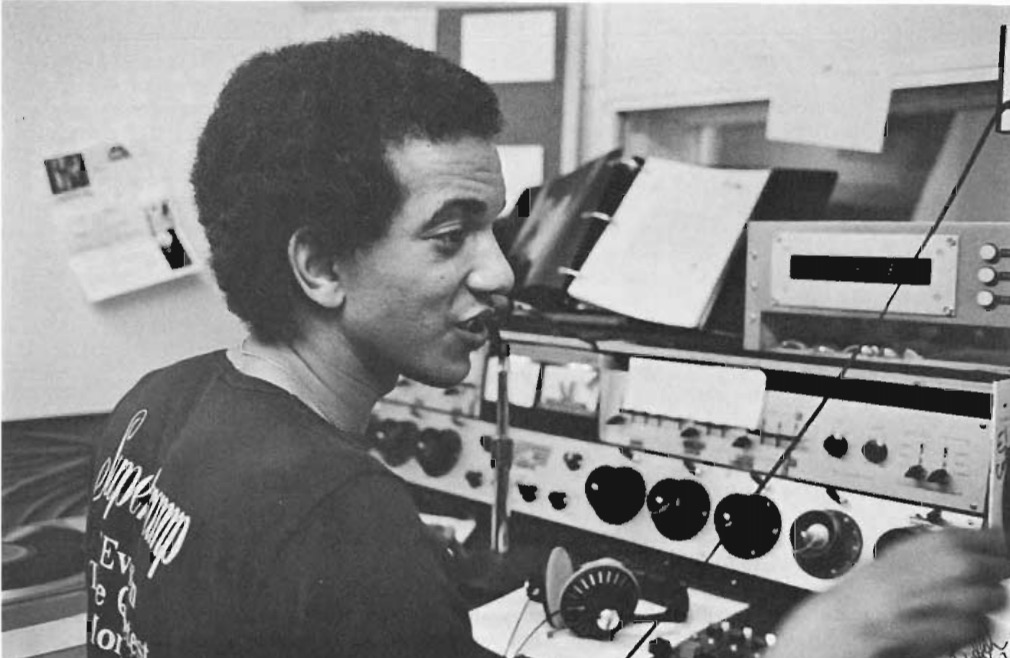 Doug Harris is a man on the go. With WRVR for a year as music director, Doug is credited with turning a Jazz station with a limited audience into one of the most talked about radio stations in the country. We talked to Doug at WRVR’s studio in Queens and in his record-filled apartment on the westside and was pleased to find him an interesting conversationalist and not the stereotyped, loquacious disc jockey that many in the trade aspire to be.

ROUTES: As music director for WRVR, do you play music you enjoy hearing?

Harris: There is so much music I would like to play but don’t—cats like Santana and Yes. We play what the people want to hear, that’s why you now hear Stevie Wonder. He came out No. 1 in the Daily News Jazz poll…that’s the people.

ROUTES: Isn’t WRVR drawing a certain amount of criticism from the media and so-called Jazz traditionalists because of this new popularism?

Harris: No, definitely not. More people are recognizing RVR as the radio station for the seventies. RVR is where it’s happening! More people are listening than ever before; just look at the (rating) book. Pop stations are even playing more Jazz now, not the other way around,

ROUTES: How do you go about programming a record that might be considered borderline pop?

Harris: I sit down with the station manager, Dennis Waters, weekly to see what fits WRVR’s sound and what doesn’t. I’ll give you an example. Once I played Steeleye Dan’s Asia and Dennis said “I don’t know, perhaps the instrumental track…” Well I said (expletive deleted) it! Went ahead… played it…Later on that evening Herschel calls me at home wanting to know where is the Steeleye Dan album ‘cause everybody’s calling asking for it. That’s how it goes, sometimes we’re lucky, sometimes we’re not.

ROUTES: What kind of feedback are you getting?

Harris: I can tell from watching the charts how we’re doing, especially when what I’m playing is picked up the next week by other stations; also, by talking to people in the industry we know that WRVR generates a certain amount of interest whenever we play a record, The word of mouth is terrific.

ROUTES: Is there any other station playing the music WRVR is?

Harris: I really don’t know, I’m sure there are several but I don’t know of any I can turn on and hear RVR’s sound. KBCA in LA is a good jazz station but they’re not in the same music category as us for example. WRVR has a very unique sound that’s not easy to duplicate.

ROUTES: Would you call the music RVR is playing universal?

Harris: Right! Or fusion music.But it doesn’t matter what you call it, it’s the sound that counts.I don’t want to get into a bag of playing just Black music. Why NOL expose music to people and let the people decide if it’s what they want to hear.

ROUTES: Where does RVR go from here?

Harris: I don’t see RVR ever being able to compete in numbers, say with an ABC with a 12.2rating, but we’re doing great with a 2.2 or a 2.4. RVR is going to be all right. It’s a good station with a lot of good people working for it. It’s already known as the Jazz station; it will continue to be that for a long time.

ROUTES: And Doug Harris, what does the future hold for him?

Harris: I don’t know. I’m happy with what’s happening now but the future is unknown, and that’s cool; if it wasn’t for the unknown, what would be the point? I’m a little anxious about it, and excited too, but I know it’s going to be all right whatever l do.