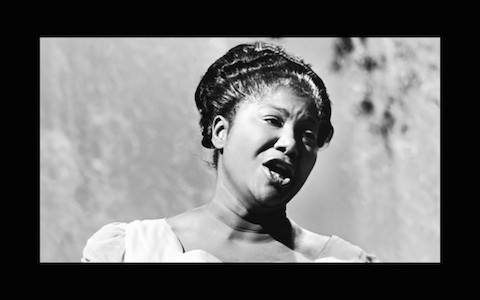 Mahalia Jackson’s commitment to God, Black people and music came virtually as a birthright, for her mother, Charity Clarke Jackson, was devoted to the church.

Growing up in New Orleans was musically advantageous for Mahalia. The Mardi Gras, Water Street, the Pleasure Marching Club all had lively songs, which Mahalia quickly learned.

The sudden death of her mother in 1916 forced five-year-old Mahalia, to live with an Aunt who was extremely poor. Aunt Ducke taught her to do hard work, and washing and ironing became her specialties. At an early age her hand grew strong and rough.

When she was 16, Mahalia clipped an ad from the Chicago Defender for a training school for nurses at Provident Hospital in Chicago. She went north to go to school, to get a private room to listen to Bessie Smith records and to work a less strenuous job.

But Mahalia’s life in Chicago went about the same as it had in New Orleans, except she made twenty-five cents more to cover her expenses, which had doubled.

In despair, she sought a church, where she could relax and shout. She joined the Greater Mount Salem church and began to sing in the choir.

Mahalia soon teamed up with The Johnson Gospel Singers and had great fun singing all over the area.

During the summer of 1934, when the country had been in a depression for five years, Mahalia earned twenty-five dollars for singing God’s Gonna Separate the Wheat from the Tares for Decca records. She didn’t know about royalties and percentages; twenty-five dollars was more money than she had ever earned.

Mahalia didn’t have a social life of parties and dates like most young girls. She was large, dressed rather plain and spent all of her leisure time in churches.

Isaac Hockenhull, her first husband, approached her in church after being attracted by her unusual voice. Isaac was ten years older and enjoyed gambling and horse racing; he also loved to hear Mahalia sing the gospels.

Mahalia respected Dorsey. They were both proud southerners and gospel enthusiasts. However, she didn’t feel that he could tell her anything about how to sing his songs. Her style was fiery and couldn’t be dictated by meter or melody. She believed that people wanted to feel music, not just hear it. She refused to ever sing a song in a style that was superficial or stoic.

Dorsey gave in to Mahalia’s personal music interpretations and they enjoyed five years of touring together. He gave her sound advice about protecting herself from crooked promoters and contracts.

By the time she was 33, she returned to Chicago and opened Mahalia’s Beauty Parlor. And then with the growing profits she bought Mahalia’s House of Flowers and other properties. But on the weekends, she toured the ghettos of the key cities and sang.The people of the Black community looked forward to her singing as a message from ‘‘down home.’’

In 1946, Move On Up a Little Higher pushed Mahalia into a world-famous arena. Millions of copies were sold. Music experts, radio commentators and promoters wanted Mahalia’s attention. Even though she had attended only one music class and couldn’t read music, she had a spirit in her voice that none could match. On October 4, 1950, she sang at Carnegie Hall to thousands. Mahalia rocked the great hall and shouted freely in the aisles.

In 1952, Mahalia appeared before millions on the Ed Sullivan Show. The overwhelming audience response prompted CBS to sign Mahalia to an exclusive contract.

At age 41, she was ready to spread the gospel around the world. She toured England, Holland, Belgium and Denmark. In France she became very ill and was advised by her doctors to give up touring and singing. Not only did she refuse to stop singing but she became deeply involved with the Civil Rights movement.

She sang at John F. Kennedy’s inauguration; Dr. Martin Luther King’s March on Washington and to troops stationed at military outposts in Japan. During a stopover on Thanksgiving Day of 1971, she collapsed on stage and had to return to a Chicago hospital. She died on January
27, 1972.

Mahalia had used her voice only for the celebration of God. She certainly would have been richer if she had sung blues and pop, but she was true to her vows and convictions. Mahalia’s music fills a void, a longing that blues and pop music cannot. Her music endures because her material will always be current.