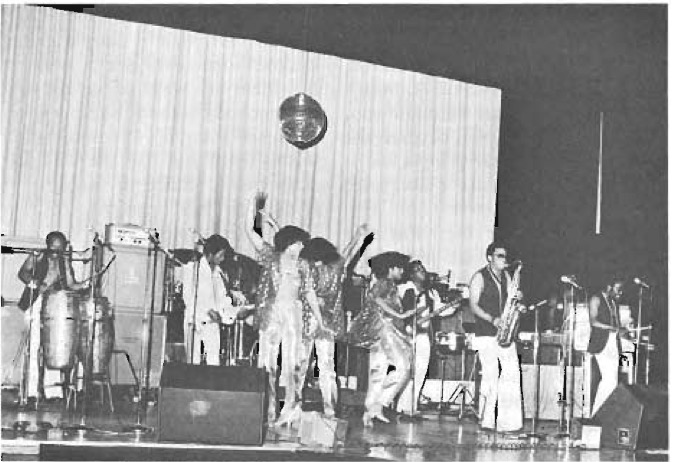 It’s not easy to be a disco band. Disco means records and many club owners who have already spent thousands of dollars to install elaborate sound systems are not overly enthusiastic about booking live bands. Does this mean that there are very few disco bands around? On the contrary, there are many, each of them vying for the few gigs that are out there. The problems seem unceasing. Club owners who are inclined toward bands want headliners — bands who have a record on the charts and whose name on the marquee can bring in the customers. Does this mean that a band that is well known has it made? Wrong again, if you get to well-known, you might bring in the customers but club owners might choose a lesser known band that can be booked for less money.

Despite these seemingly insurmountable problems there are disco bands that come out on top and one of the most noteworthy is the Fatback Band.

The Fatback Band was one of the first bands in the country to play live disco music. They are also responsible for creating the sound emulated by many of the top disco groups. During the formative years the band then formulated the concept of conducting their recording sessions in front of a live audience. Fatback founder Bill Curtis explains why: “If the people started dancing and clapping to the music, we knew in advance that we had a hit.”

Bill Curtis began in the band business as a drummer. He played with many big bands during the 1950s and 1960s playing behind such artists as Arthur Prysock, Bill Doggett and Clyde McPhatter. Subsequently he found his own record company called Fatback Records. “Fatback,” Curtis says, “is a New Orleans term which means ‘funky.'”

As a small record company, one of the problems he encountered was distributing his product. “Independent distributors tend to hold your money for long periods of time,” he said, “long enough for you to go broke.”

To supplement his income during this time Curtis began to package the musicians he knew from his record company into bands. He then booked these bands for weddings, bar mitzvahs, and other private affairs. This is how the Fatback began.

Through careful planning and share tenacity, Curtis landed a long-term record contract for the Fatback Band with Polydor records. While there are still problems in landing live gigs, Curtis feels that the solution to the problem lies in Mutual efforts between the record company and the bands. “Promotion is the name of the game, and unless the company makes an effort to take their music to the radio stations, the stations won’t touch it and the band will remain unknown. When I signed with Polydor in 1972 they didn’t have a black division and their white promotion men were frightened to go to the black record stores or radio stations.”