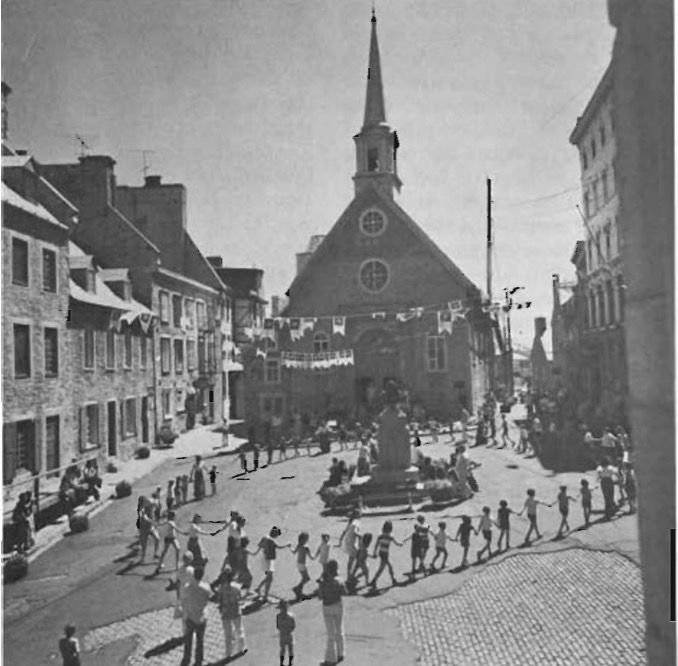 If you are in the market for a nice respite, ebullient with Old World charm, continental cuisine and a rendezvous with French history, the Province of Quebec is a place to consider for your next vacation.

Today’s Quebec Province is called the cradle of French civilization in America. It is fun in any season. The people are hospitable and friendly, it’s a place to stir your emotions as it beguiles you with its quaint little French cafes, it is historic beauty — in short it’s a place worth knowing.

Quebec City is close (about 10 hours from New York by car or 2 hours, via Montreal, by Air Canada).

As you would expect, summer visitors to Quebec become pre-occupied with the outdoor pleasures of the historical sites and the beauty of the province. The temperature ranges a cool 74 to 79 degrees.

In winter Quebec’s outdoor attractions are winter sports and a two week winter carnival in February. The temperature range is a brisk 10 to 40 degrees, averaging 10 feet of snow.

Allow two or three days to visit Quebec City, the capital of the Province of Quebec.It is a split level city (upper town and lower town) that stands high above the majestic Saint Lawrence River. Architecturally it is like no other city in North America — it is surrounded by a 20 Ft. wall.

In the heart of old Uppertown is Place d’Armes, a little square where military parades and noisy public meetings were held during the French reign. A visit to Place d’Armes makes it easy to imagine how Quebec looked in days gone by.

Dominating Place d’Armes is the Chateau Frontenac. This impressive castle-like structure is another striking reminder of the past. Its turrets and towers can be seen from miles around.

Another living accommodation is the Quebec Hilton. Located one minute from the Old City, the hotel connects conveniently through Place Quebec, an underground complex, to parliament, and features fine restaurants, a heated outdoor pool and a health club.

Walk along Dufferin Terrace (1,400 Ft. boardwalk completed in 1878) alongside the St. Lawrence River to the Citadel.

The Citadel, a huge star-shaped fortress, was rebuilt between 1820 and 1932 as a defense system. Standing 360 feet above the Saint-Lawrence River, it is composed of 25 buildings. The Vice-Regal residence, the King’s Bastion, The Prince of Whales Bastion and military barracks are a part of the Citadel.

Walk along Promenade Des Gouveneurs to the Quebec Museum in Battlefield Park. The Museum houses models of old buildings, early and modern paintings, bronzes, historical relics and documents relating to the history of Quebec.

Battlefield Park is one of Quebec’s most outstanding attractions. As a park its 235 acres of manicured lawns and bicycle paths makes it one of the largest in America. The park extends along the edge of a bluff and contains a number of historic monuments.

Take a stroll down Notre Dame Street, one of the oldest streets in Quebec, to Place Royale where you will see Notre-Dame-des-Victoires church built in 1688. This chapel like structure serves as a living history lesson. Inside you will be attracted by the display of fine paintings: a copy of Van Dyck’s Christ on the Cross, a painting by Van Loo and another by Boyermans. The main altar is made in the shape of an old fort, carved out of wood and complete even to the smallest detail with windows and turrets. A bust of Louis XIV stands in front of the church, a gift from France in 1948.

Place Royale is a historic showcase. Structures dating as far back as 1658. These ancient buildings were once owned by wealthy merchants and serves as a reminder that this particular area was once the centre of commercial activity in the early life of the city. In the vaulted cellars of the Fornel House you are shown an exhibition of French Canadian life during the 16th and 17th centuries. You are able to admire close up some of the old domestic objects unearthed during recent excavation work in the city.

You have an unobstructed view of Lowertown, the river in the distance, and rolling foothills.

Darkness brings a sense of elegance and excitement to Quebec. Quebec has become world renown for its exquisite French continental cuisine. Places like Le Moulin De St. Laurent has excellent food served along with gypsy music. For a very Parisienne atmosphere, the Restaurant Le Vendome serves French food with a genuine taste of France. There are a few places in town where tourists and Les Quebecois (Quebec-Qua pronounced) mingle in the lively discos. (see box)

In winter, Quebec becomes a snow white wonderland where sports lovers come for skiing, skating, snowshoeing, hockey, canoe races, ice skating races, dogsledding and ski tournaments.Skiing in Quebec has something for everyone, from beginner to the expert. There are long easy slopes for beginners while the expert can find World Cup racing slopes at the Mont-Saint Anne, some 25 miles out of Quebec City. But there is more than just skiing. There is singing and dancing, swimming pools and saunas, tobogganing and skating, or just sitting by the fireside. Many of the ski centers in Quebec have established package deals which include room and board, lift tickets and sometimes, ski lessons.

In February, Quebec begins its Winter Carnival. It has its uniquely French atmosphere of Joie de Vivre (the fun of living).

The easy way to see Quebec is to sign up for any of the many tours available. You can tour the city by horse drawn carriage, by boat or by bus. Whichever way you choose to see it, it will be a city you will never forget.