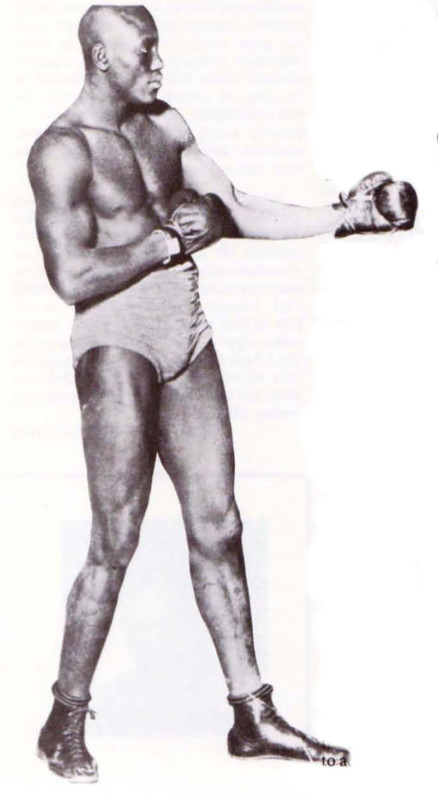 While America was eagerly embracing the technological innovations and modern notions ushered in by the 20th century, a bigger-than-life black man named Jack Johnson burst onto the scene and won the coveted heavyweight championship of the world. At the time, the emancipation of blacks yet remained a raw, exposed nerve in the body of the nation. Thus, Jack Johnson’s 1908 victory over the reigning heavyweight champion, Tommy Burns, a white man, gnawed at the very heart of white America, eliciting the most illogical of all human frailties — racial prejudice. Over half a century after his reign, Jack Johnson is still considered by many to be the greatest heavyweight fighter of all time. More significantly, Johnson will take his place in history as one who helped to destroy the myth of white superiority for the generations of blacks who came after him.

Jack Johnson was formidable in the ring. He was  colorful. He was arrogant. He was, as the recent WABC-TV documentary Jack Johnson: Black Power In The Ring pointed out everything that white America said a black man should not be. Therefore, he had to be removed. America simply could not endure the indignity of a black man possessing the greatest honor in sports, the heavyweight championship title, a title that has always symbolized supreme strength and power.

Outside the United States, Johnson enjoyed considerable popularity throughout his career. But the country he loved — the land of his birth — persecuted him relentlessly, until his defeat by Jess Willard in 1915. The adulation and euphoric atmosphere that generally surrounds accomplished athletes in their native land were replaced by resentment, hatred, jealousy and attacks on his integrity and ability as a boxer. Johnson’s arrest on trumped up charges of white slavery and his subsequent conviction on violations of the Mann Act [transportation of a woman across state lines for immoral purposes] were clear indications of unwillingness of the American system accept blacks in roles other than subservient ones.

Despite the controversy and ill will that constantly dogged him, Jack Johnson did not succumb to the bitterness that would have eaten away at others. The crusades against him never succeeded in destroying his almost childlike faith in the existence of fair-minded persons. In fact, Johnson was grateful for the good fortune he enjoyed and the opportunities opened up to him by a career that held out fame and wealth with one hand and public scorn with the other. In his autobiography In The Ring And Out, Jack Johnson emerges as an individual endowed with a keen philosophical awareness of the ups and downs inherent in life.

The champ was born John Arthur Johnson in Galveston, Texas on March 31, 1878. As a youngster, he was dubbed Lil Arthur — his skinny childhood physique belying the exceptional stature and strength he would attain as an adult. Jack’s pugilistic career may have been launched by his sister Lucy, who demanded that he not allow the neighborhood bully to take advantage of him. In time, Jack earned a reputation for his fighting ability against other young toughs.

Assisted by an employer who coached him and improved his knowledge of boxing, Jack, at 15 years of age, won a 16 round contest against John Lee, a popular local boxer. Eventually, Johnson took on the barnstormers [roving amateur boxers who went from town to town offering $25 to anyone who could stay in the ring with them for a specified number of rounds]. This led to his becoming a barnstormer himself, then an exhibition fighter and finally a well-known pro considered a contender for the heavyweight title.

By the close of 1906, Johnson had engaged in 56 registered fights, of which he lost only three, and had participated in numerous unrecorded exhibition matches. But the color of his skin constantly stood as a barrier between Johnson and the title match. For the next two years, Jack took on every potential contender at home and abroad, negotiating matches that would give him sufficient prestige to make the title fight with Tommy Burns inevitable.

At last, after lengthy negotiations and many concessions on Johnson’s part, the contest was set for Sydney, Australia on December 26, 1908. It was to be the first world heavyweight championship fight held on foreign soil, and for the first time in ring history, a contestant’s [Burns] manager served as both the promoter of the fight and the referee. So confident was Johnson of his imminent victory that he agreed to this unusual arrangement, wanting to leave no room for doubt in the decision. The disparate financial settlements were of minimal importance to Johnson, who aspired to a more valuable prize — the title. Although the title fight was scheduled for 20 rounds, the local police force halted the bout during the 14th round, in order to avoid what would have been total physical domination of a black man over a white man. However, by this time Johnson had amply demonstrated his mastery and control. Burns fell from his throne, and a new champion was declared.

Describing the period immediately following his triumph over Burns, Johnson wrote in his autobiography “The hunt for a white hope began, not only with great earnestness and intenseness, but with ill-concealed bitterness.” From that juncture until his defeat by Willard, Johnson was the target of criticism and determined plots to unseat him in one way or another, not excluding threats and attempts on his life. But whenever Jack defeated yet another white hope, more fuel was added to this raging fire.

After Jack Johnson’s seemingly effortless victory over Stanley Ketchel, another white hope, in October 1909, many sportswriters, looking for any excuse to deny the champ his title, decided that Jack Johnson could not really be considered the champion unless he fought Jim Jeffries, a former titleholder who had retired undefeated. During the six years Jeffries was out of the ring, he had settled down to a comfortable life as a gentleman farmer. After all other urgings had failed, Jeffries was coaxed out of retirement once he was convinced of his responsibility to return the title to its rightful owners — the white race.

What was heralded as The Battle of the Century was in reality the battle to decide racial superiority. Jeffries was quoted in the Daily Telegraph as saying “I fully realize what depends upon me and won’t disappoint the public. That portion of the white race which is looking to me to defend its athletic supremacy may feel assured that I am fit to do my best. I’ll win as quickly as I can.” On July 14, 1910, in Reno, Nevada, after 15 rounds in oppressive 110 degree heat, Johnson knocked down a bloody faced Jeffries and another white hope.

Following the match, Johnson went on a short trip to London to make stage appearances and fight exhibition bouts. Wherever he appeared the crowds were large and enthusiastic. When Jack returned to the United States, he opened the club Cabaret de Champion in Chicago, which became another source of trouble for the titleholder. Though it was a showcase for fine art, including Rembrandts, curios and exquisite antique furniture, the club was soon under fire for what was considered immoral purposes: a club catering to both white and black patrons. After his second wife, Etta Duryea of French-American descent, committed suicide, Johnson closed the club. But the hounds were still on Jack’s heels. Soon after, Jack was charged with violations of the Mann Act for his involvement with Belle Schreiber, the fighter’s former paramour, at a time when the law was not in effect. After his conviction, he fled to Europe, with no hope of receiving justice in the United States.

Although he became an expatriate, Johnson was prompted by his love of country to act as a secret agent for the American military attache in Spain, by providing information for resisting German submarine warfare and safeguarding shipping. While in Europe, Jack Johnson held onto his title by easily defeating Battling Jim Johnson [December 19, 1913] and Frank Moran [June 27, 1914]. But as World War I grew more intense, he left the continent for a title bout with Jess Willard in Havana, Cuba. According to Johnson, he had been led to believe he could return to the United States to leniency on the part of federal officials and to resume a prosperous life if he would appease the public by allowing Willard to win.

The battle between Jack Johnson and Jess Willard took place on April 5, 1915. The champion, now 38 years old, was knocked down after fighting 26 rounds in 100 degree plus heat. But rare footage of the match depicts Johnson shielding his eyes from the sun when he was supposedly TKO. Whether he was fairly defeated by Willard as some authorities assert or whether he laid down, thus seizing the opportunity to settle many issues at once, cannot be determined now. The question is past the point of definitive scrutiny. But for seven years Jack Johnson was the heavy weight champion of the world. That is indisputable.

When Jack Johnson returned to the United States, he surrendered himself to the authorities, who sent him to Leavenworth, where he served eight months of the one year and a day sentence he received. Even in prison, Jack continued to box. In 1925, he married for the fourth time and seemed to find happiness in life until he died at age 68 of internal injuries sustained in a car accident on June 10, 1946.

The scrawny youngster who rose from working the docks of Galveston to the pinnacle of the boxing world never reached high school. Yet, Jack Johnson was a man for many — if not all — seasons. He lived rapidly, intensely and eagerly which partially explains his passion for and fluency in music, art, science and history and his extensive travels. After making his acquaintance, worldwide leaders in industry, politics, literature and the arts discerned The Galveston Giant to be a magnetic, multifaceted human being. Conversant in English, Spanish and French, Jack read the great works of literature in these languages. Johnson was a truly unique individual whose skills were not limited to the ring. At various times in his life, he was a bullfighter, wrestler, advertising executive, actor, secret agent, promoter, musician, lecturer, shipping clerk, auto racer and author.

Johnson once said that his successes gave him great thrills and satisfaction but his failures made him wiser. Whatever enjoyment life had to offer, Jack received wholeheartedly. As the closing lines of his autobiography indicate, none of the trials Jack Johnson endured managed to rob him of that eternal ballast of the human soul—dignity “As I look back upon the life I have lived and compare it with the lives of my contemporaries, I feel that mine has been a full life and above all a human life.”