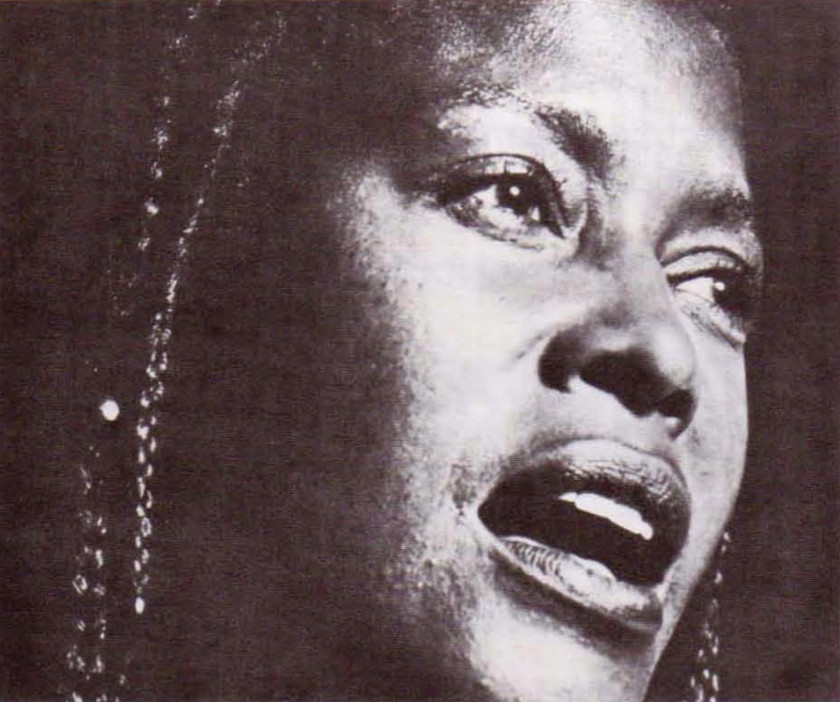 Great artists are both aristocrats and recluses — aristocrats because of their taste and refinement, recluses because they must submit to the rigorous discipline necessary to refine their work away from the hustle and bustle of everyday life.

One of the great aristocrats of songdom, Abbey Lincoln is also one of its most elusive exponents. Shunning the facile life of cabaret performers and the glitter of Hollywood, Abbey has always sought her art within her innermost self. Her records are few, but they feature such eminent musicians as Sonny Rollins, Kenny Dorham, Paul Chambers, Max Roach, Wynton Kelly and Philly Joe Jones and such tasty songs as Come Sunday and Lost In The Stars. Abbey is also known for her stellar performance in For Love Of Ivy  [with Sidney Poitier] and Nothing But A Man [with Ivan Dixon], both milestone films in their portrayal of black people. She has also made guest appearances on Mission Impossible, The Name Of The Game, The Flip Wilson Show and Hollywood Palace.

Since divorcing Max Roach in 1970, Abbey has lived in California. Recently, she came back to New York to promote People In Me, her latest album release [recorded in Japan] and to perform at the Beacon Theatre and the Village Vanguard. For the concert at the Beacon, Abbey, whose unique artistry was once more celebrated by fans and critics alike, was backed by Top Shelf, an outstanding trio consisting of Reggie Workman [bass], Stanley Cowell [piano] and Billy Hart [drums].

One of the most intense emotional experiences of my life had been to witness Abbey sing the Freedom Now Suite in a film of Max Roach’s European tour. I was so moved that I had to leave the theatre. So, I experienced tantalizing expectation and an acute sense of privilege as our interview approached.

When I met Abbey in person, she had just returned from a walk in the park, to relax before an evening rehearsal at New Muse, the Brooklyn museum for children. She struck me as warm and vibrant, with an urgency in her voice stemming from a strong sense of self and an abiding commitment to important issues.

ROUTES: How did your involvement with music start?

Abbey: As a child, I started playing the piano at home, on a farm near Kalamazoo, Michigan. I also used to practice in churches and schools.

ROUTES: When did you decide to become a professional musician?

Abbey: When I was about 19. Up until then, I wasn’t aware of a music industry. Fortunately, somebody has always been around to bring me work. I never had to scrounge for a career, which is why I’m so independent.

ROUTES: I once read how encouraging Monk had been to you.

Abbey: Yes. All the great jazz musicians helped me. I must say for Max [Roach] that he was there when I needed him, and it was because of him that Monk, Dizzy, Miles, Sonny Rollins and many others gathered around me. On my first album, That’s Him, recorded on Riverside, Kenny Dorham and Paul Chambers helped to back me up. Max and his colleagues also lent a hand on It’s Magic and Abbey Is Blue. Although these recordings have been out of print for a while, they have just been released in Japan, and I’ve been getting royalties for a change.

However, I have to admit that living with a famous musician is not always easy. There are ego problems, and the private man is sometimes very different from the public image he projects.

ROUTES: What about your film career?

Abbey: I was offered film roles as a result of my work as a singer. After For Love Of Ivy came out in 1968, I entertained the thought for a while that I might like to join the other high rollers. But I just couldn’t manage it. The people in the industry [I won’t mention names] wanted me to give them my total allegiance, and I couldn’t accept that. Also, after all my accomplishments, the offers I got were not what I expected. I thought I would be offered something that I wanted to do. That’s the way Doris Day works… . That’s the way most known actors work. But I’m glad for those experiences and credits. It’s the hardest work I ever did in my life. People often ask me when am I going to do a movie again, but I didn’t start out to make movies in the first place. It’s very demanding work, and films are like records — you cannot change what you have done.

ROUTES: Did you find films as fulfilling as music?

Abbey: All artistic expressions are fulfilling, but I’ve had a chance to practice singing all my life, and singing is my first love.

ROUTES: You have also been teaching, lecturing and doing community work in California.

Abbey: Yes. Some friends say to me: “Where have you been all this time?” Well, I’ve been working very hard. For a year, I taught a course on the philosophy of the theatre and Africa’s contribution to world drama at the Afro-American Department of Northridge University in California. I visit elementary and high schools, doing presentations in which I recite poetry, sing a song and speak to the students about the philosophy of life I’ve gathered over the years. Quite a few women’s groups have invited me to speak to them as well.

By always living in expectancy, I keep myself open for new ways to grow and learn. I paint [I’ve already created over 50 paintings], I write, I’m learning to dance, I sing, I act. I’m thankful for all these means of expression. I have had a very special career; had a chance to do some fine, important things; and want to do some more.

ROUTES: How do you feel about your upcoming engagements in New York?

Abbey: It will be a celebration for me. It’s been so long since I last sang here. Previously, I came back East to do a film, Short Walk To Daylight, but not to perform.

ROUTES: Do you miss New York?

Abbey: No. When I lived here in N.Y., I didn’t miss L.A. Now that I live in L.A., I don’t miss N.Y. because I make myself at home wherever I am. I moved to the West Coast when my marriage to Max broke up. My mother, who passed away two years ago, lived there. If I have any regrets about my career, it’s that I never had enough money to buy my mother anything. Anyway, I’m  beginning to see my life in perspective. I’m counting my blessings and striving to take a new look at myself.

During these past nine years in L.A., I’ve had a chance to re-evaluate my thinking. I used to believe that any black person I would meet would mean something to me. This is not necessarily true. I no longer see people as oppositions; I see a spirit that people embody.

ROUTES: I heard your trip to Africa was a wonderful experience. How did the trip come about?

Abbey: I was in L.A., and I had a visit from Miriam Makeba, who was in town to record. She asked me if I wanted to go to Africa as her traveling companion and offered to pay for my ticket. We first went to Guinea, and the President, who is Miriam’s patron, named me Aminata. Then we went to Zaire, and there the Minister of Information named me Moseka. Aminata Moseka is another personality and I’m slowly becoming her. Abbey Lincoln is a part of me. She’s also on record; she’s in some history books. I’m thankful for the career I’ve had in her name, but Aminata Moseka is here to stay. I introduced my new name in People In Me, my current album. I am not forcing others to use it, however. My mother never did.

ROUTES: How did people react to you in Africa?

Abbey: Nobody thought I was not African. But they just didn’t know how to place me because I wore my hair in braids and wore dresses that were variations of different African cultures. When I came back, I discovered something about myself: I’m not just pan-African — I claim the world as my home. I don’t mean we have the right to other people’s land but that we shouldn’t be confined to just what our passports say. That’s how People In Me originated.

ROUTES: How do you feel about the economic constraints imposed upon artists in our society?

Abbey: Originally, the arts were not for sale. The fact that they now are is to the detriment of both the artist and society. We need shelters; we need temples for the artists to work in. You gather the light, and when you take it to these places where there is irreverence, you destroy yourself. Artists destroy themselves. They live in irreverence and disrespect. I believe that music precedes people and will always be there. But there will always be temple-breakers who will steal the music and run away with it. I mentioned Japan before. Unfortunately, Japan is on its way to falling prey to the same commercial madness as America.

ROUTES: Why do you think our society is so materialistic?

Abbey: We do not value our lives enough. We throw away our ancestors for tinsel town, and that’s the way to death.

ROUTES: The Mexican poet Octavio Paz wrote that our society has cut itself off from its past.

Abbey: Yes, this is true. I loved the Tutankhamen exhibition, but there’s such a difference between seeing yourself as a golden image and seeing yourself as buried in the ground! I don’t see how one can separate the arts from religion. I’m not talking about organized religion. As Langston Hughes more or less said, we are as old as rivers, as old as the blood which flows in our veins, and there is no way we can deny the legacy of our forefathers.

But, fortunately, Alex Haley seeded this country, and probably this planet, with a thought of ancestry. My first concern is for my ancestors, those to whom I owe my life.

One of Abbey Lincoln’s earlier records is entitled Abbey Is Blue; on her new album, People In Me, Abbey’s face is shown in a blue light. And indeed, Abbey/Aminata is blue, blue as the Nile of the Pharaohs, who first found the flame of art and handed it over to her to carry to us.