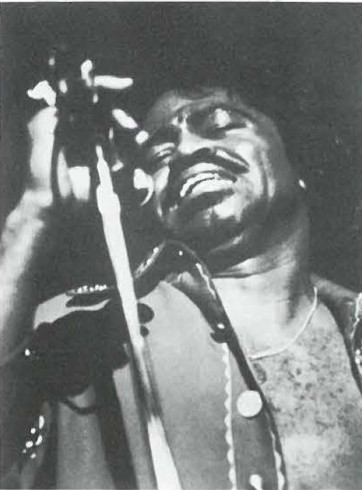 James Brown, after an extended vacation, has returned to the music world. Polydor Record Company and James Brown announced in a news conference the imminent release of a new James Brown album. The two tracks, from the album, played for the news conference were definitely disco with the identifiable J. B. brass section.

Looking fit for a man of forty-five, James Brown fielded questions about his comeback. Under the new arrangement, J. B. will just sing, leaving the producing to Brad Shapiro, who has produced recordings for Millie Jackson and Wilson Pickett.

Historically, the music world has not treated comeback efforts too kindly, but J. B. and his producer see his return more as a continuation of the music that J. B. made famous. The Original Disco Man, as he is being billed, is the tentative title track of the album. Says James Brown people have been buying imitation of J. B., now they can buy the original.

The Black Music Marketing Association held an informal planning session in Philadelphia, its home base, during April to discuss Disco’s encroachment on forms of black music and the black music artist.

The results of the meeting dealt with “Large recording companies’ insensitivity to the listening desires of the general public beyond what has proven to be salable, to the major labels’ discrimination toward a ‘sound’ and the coercion of their artists to produce disco, or jazz or pop rather than allow them to create what they best create and thus be challenged by the marketing strategy. The concerns reflected the inherent problems of Top 40 and radio programming and its ultimate effect on artist development; taking Top 40 play lists to task; discrimination on the play list to avoid programming that is ‘too black’; the need for commitment from major labels to back all product that is good and not just produce what is ‘trendy’; merchandising product so as to recycle the investment to all artists — superstars and new acts alike,’’ reports the BMA Newsletter.

The Black Music Association plans to host a conference in Philadelphia June 8-11 to celebrate June as Black Music Month.

Ten years ago, the largest party on earth was held on a farm in upstate New York. Woodstock became part of the 1960’s phenomenon. This year a couple of promoters, Stephen Metz and Joseph Papp are hoping to repeat this phenomenon with the First Annual International Disco Exposition to be held at the New York Coliseum, June 21-24.

The main attraction, of course, will be disco and all the paraphernalia. The latest in disco audio, video, fashions, all directly connected with the disco craze, will be on display.

Live entertainment will be supplied at least one hour every night by a major record company spotlighting one of its top international acts in a total entertainment setting.

WKTU’s radio personality, Paco, will host all the major activities during the four day event and WBLS will set up a booth for its on-air personalities.

Beginning in mid-May, more than 4,000 inner city youngsters will receive free instruction on tennis courts setup in the streets of New York City.

The program provides ten weeks of tennis instruction — a minimum of two hours per week — on portable tennis courts setup in areas that otherwise lack comparable facilities. Youngsters, who normally would never receive any exposure to, or training in this sport, are introduced to tennis fundamentals in a way that often spurs continued interest.

The schedule is from May to September. At the end of the program a tournament involving tennis skills will be held. Official mobile tennis patches, certificates and T-shirts are awarded for accomplishment.

The ten-week program is sponsored by the New York Recreational Department and the PepsiCola Bottler in the New York area. For further information, call Sam Hall, (914) 253-3300.