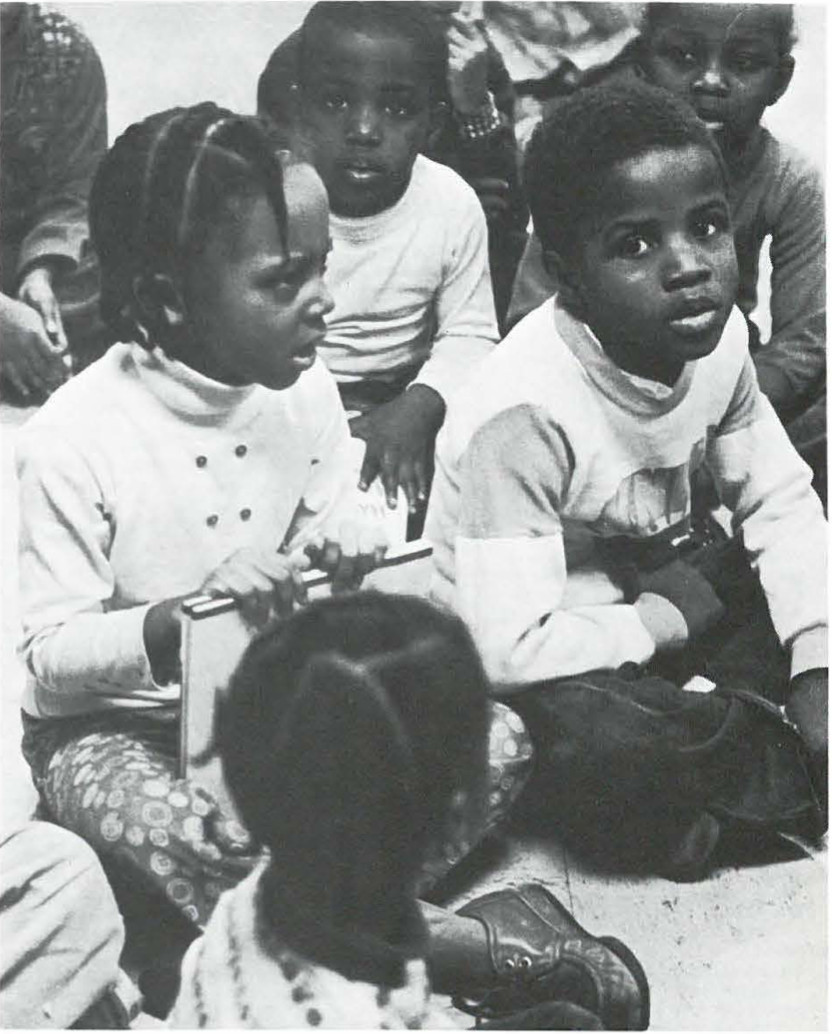 Kids in the Red Hook Community People’s Day Care Center sat watching Hansel & Gretel, An Appalachian Version. They didn’t talk during the first part of the film. They hardly moved but there was nothing passive about their viewing. They were deeply, emotionally involved in the familiar folktale and that involvement expressed itself, finally, when the witch appeared, Ooh, is she ugly,  one of the cool kids said. Nudging and whispering continued until the witch locked Hansel in the cage. Once again, silence was palpable.

Not until Gretel hesitated as the witch said, just put your head into the oven to see if the bread is done did the kids again express their feelings. One child, a boy of about seven, slowly rose from the floor and cried out to the young girl in the movie, do it! And she did. Gretel moved quickly to get rid of the witch in the traditional manner, by pushing her instead into the oven, and then rushed to free her brother. When the film ended, the young audience clamored to see it again.

The Red Hook location was one of the sites used by the Media Center for Children (MCC) to test films with kids. The MCC staff believes that the excitement and energy generated by Hansel and Gretel or any other good children’s film, can and should be creatively channelled. Hansel and Gretel, for example, is a wonderful introduction to movement and dramatic activities, mask making, and storytelling. MCC tests films to find out what excites young viewers, what interests them and how they react in order to help adults use film more effectively with kids.

MCC is the only group in the country that regularly screen and evaluates films with children. It was established so that kids could have some say about film products adults make and sell — for which they are the intended audience. MCC makes the information it obtains via testing available to the public.

Films Kids Like and More Films Kids Like are annotated catalogs of short 16 mm film; both are available in many libraries or can be bought from the American Library Association in Chicago. Young Viewers, MCC’s quarterly magazine on children’s media, can be obtained from its New York City office, 43 West 61st St, New York City, 10023.

The Media Center for Children also organizes conferences on children’s media and programs screenings of films for family viewing. In the early part of 1979, the International Year of the Child, MCC is sponsoring several family screenings and a seminar on programming films for children. “We know what kids like,” says Maureen Gaffney, director of the Media Center for Children, ‘‘now we want to share some of their favorites with family audiences. It’s media education the whole family can participate in and enjoy.”

A former teacher and children’s filmmaker, Gaffney has viewed some 2,000 children’s films and has test screened 800 films with kids themselves. She and her staff avoid films with needless violence and negative or stereotypical attitudes about ethnic groups, age and sex roles. ‘‘Good films for kids are life-supporting,” says Gaffney. ‘‘They present something kids can care about in an imaginative way, from a point of view with which the child can identify, and in a manner which is neither snide nor condescending towards them. It doesn’t have to be all sweetness and light. Hansel & Gretel is good and scary. Kids love it.”