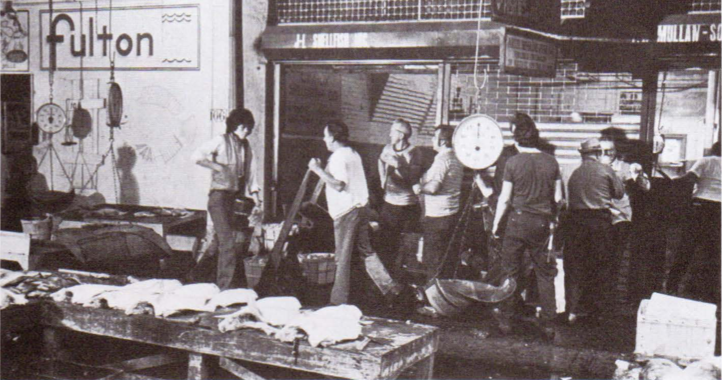 Thinking of day tripping? New York City is full of interesting off-the-beaten-path places, some of which are recent additions to the City’s repertoire, some are part of the City’s great history. They have in common slight inaccessibility, so having a car helps but public transportation will get you there even if it requires taking a couple of trains, and or a bus and then walking several blocks to the site. Consider the following places:

Next to the Bronx, in Long Island Sound, is a small island known as City Island. Docked in its marina are a variety of yachts and small fishing boats, on the pier, fathers and sons wait patiently for fish to bite— you would think this was anywhere but New York City, yet City Island is a part of the Bronx. The borough that gives us acres of ashy ruins—is also a haven for seafood lovers! Lobster, red snapper, shrimp, oysters, clams and other ocean delights can be enjoyed at the various restaurants lining both sides of City Island Avenue, the main thoroughfare.

On the left side of the avenue as you ride over City Island Bridge, is Thwaites established in 1870 and renowned for its delicious seafood and excellent service. If you are not counting calories, the superb lime pie is a must.

At the end of the Island are two clam bar-style restaurants which serve Coney Island cuisine. At small tables overlooking the water, one can have such earthy fare as clams on the half shell, frankfurters, hamburgers, french fried potatoes and corn on the cob. Taste the fried oysters— they have to be the best on the island.

After eating, browse in the many antique and nautical shops on the avenue—play tourist in your own city. An ideal place to visit anytime, City Island is particularly suitable for family outings on Sunday afternoons.

At is difficult to believe that just a few minutes away from the hustle of the city is a peaceful haven of natural splendor, but that aptly describes Wave Hill. Located in the Riverdale section of the Bronx (249th Street and Independence Avenue), it overlooks the Hudson River and consists of beautiful lawns, graceful trees, colorful flower beds, rose gardens, and even a gold fish pond. There you can observe birds, raccoons and opossum in uncultivated woodlands or explore a herb garden containing 128 varieties which can be used for medicinal and culinary purposes; in greenhouses, among palm, cacti and tropical plants, a horticulturist conducts mini-lessons on plant care while chamber music plays and wine and cheese are served.

Wave Hill, formally known as the Centre for Environmental Studies, is one of 11 sites in the United States to be designated a National Environmental Education Landmark by the United States Department of Interior. It stresses an awareness of nature in courses ranging from astronomy, indoor and outdoor gardening, food foraging and fabric dyeing with natural plants.

Scientists from the City University Institute for Marine and Atmospheric Science are significantly involved in community education. Housed in Glyndor II, a classical Georgian Mansion, they assist Wave Hill in organizing workshops and symposia focused on environmental issues.

The Institute Staff members are not the only ones who have found a home here. At one time or another Wave Hill House, which dates back to 1843, has been the home of Mark Twain, Teddy Roosevelt and Arturo Toscanini. Now, it is an elegant setting for chamber music concerts, dance recitals, poetry readings and art exhibits.

Admission is free Mondays through Saturdays; but there is a one dollar charge on Sundays for non-members and children over 14. This time of year, Wave Hill is open daily from 4:30 pm to sundown Mondays through Fridays. Saturdays and Sundays 10 am to 4:30 pm.

For the past three years, thousands of viewers in Nashville, Miami, Atlanta, Raleigh, Richmond and Philadelphia have been excited over a traveling exhibit sponsored by the Museum of Holography. Holograms are three dimensional light sculptures created by laser beams. These sculptures are enclosed in glass cylinders and appear to be solid, but that is mere illusion, and a very clever one. Praise can be heard from galleries as far away as France, Germany, Venezuela and Eastern Europe where audiences marvel at holograms of dancing ballerinas, street scenes and something as unusual as a holographic poem. Another unusual piece of work is Space Graffiti. It is a visual double pun by an artist who is shown revolving inside a rotating cylinder, herself, writing whipped cream in that substance.

Dennis Gabor, a British scientist, discovered holography in 1948 and received the Nobel Prize in Economic Science, in 1971. The effect is achieved by bouncing laser beams off objects onto a photographic plate. When, from another source, laser light is projected back through the plate, particles are reflected from the film and recreate the object as it looks in reality.

The art, however, did not begin to grow until after 1960 when holographic techniques and applications blossomed. The present state of the art is largely due to activities in the big, red cast-iron building located at 11 Mercer Street in the SoHo district, the Holography Museum. Since its establishment in 1976, it has introduced over 200,000 people to holography through its exhibit, programs, lecture series, tours and traveling exhibits.

Downstairs in a theatre reserved for lectures, is the Hol-O-Fame, a gallery of holographic portraits of famous personalities, among whom are Arthur Barnes of the New York Urban Coalition, Tom Brokaw of the Today Show, Big Bird of Sesame Street, William F. Buckley and Bella Abzug. A service not reserved for celebrities alone, one can arrange to sit for a holographic portrait for $375.

From 12 pm to 6 pm, Wednesday to Sunday, visitors can browse through a 250-piece collection and shop at the Museum bookstore, the world’s largest retail outlet for holographic products. On sale are holographic pendants, key chains, books, reprints as well as holographic movies, plates and studio prints.

Every Thursday from 7:30 pm to 9 pm practicing holographs discuss their work.

The Museum building, built in 1870, is one of the few cast-iron front buildings whose original facade is still intact. It deserves your attention as does the surrounding SoHo district which has recently developed into an active and progressive cultural area.

If you catch one of the two earlier performances of the Jazz Boat Ride you will have time to visit the Jacques Marchais Center of Tibetan Art at 338 Lighthouse Avenue, Staten Island. Part of the Island’s charm is its unusual treasures and a Tibetan art center is an unexpected discovery.

The temple houses one of the largest collections of Tibetan art in the Western Hemisphere. The museum also includes fine examples of the art of China, Japan, Nepal, India and Southeast Asia.

Contrary to popular belief, the Fulton Fish Market is more than an old, dilapidated area reeking with the stench of decaying fish. It is one of New York City’s oldest institutions, a historical monument to bygone days when this City was the main port of call for sailing vessels from every nation. According to the Guide, a popular publication during the early 1800s, between 500 and 700 vessels were in port at any given time during busy seasons.

The first fish market was built on Fulton and South Streets in 1822. It was also the first shopping mall where meat, vegetable and grains were also sold. Soon street vendors selling soft shell crabs, oysters and clams appeared, and restaurants and saloons were established to serve the Fulton Ferry passengers.

Around 1835, the Market was moved to the river side of South Street, after the vendors began to complain of the pervasive and unpleasant odor of fish. They eventually moved to other parts of the city, leaving the area solely to the fish market. South Street then became known as the Street of Ships. Its proximity to the River made it easier for fishermen and sea merchants to unload their cargoes to sail lofts, (sail makers) ship chandeliers (candle makers) and saloons that lined the street. It is from this locale that both the city and the nation grew.

Today, the old brick buildings and historic wooden piers are still engaged in an activity that has spanned 150 years, namely the buying and selling of a huge volume of fish.

With very few changes, the Market continues in the same manner as it did 150 years ago. From 12 midnight to 8 am, Monday through Friday, over 80 merchants sell many varieties of fish and seafood to restaurants, hotels and retail stores. During non-busy periods, they will sell fish to retail buyers.

Six am is the best time to visit the Market. It is then that its activities are in full swing and when one can imagine what South Street was like during the 19th century.

Against a backdrop of boxes stacked on street curbs and broken crates strewn about the drama takes place. Men, pushing carts of fish, scurry back and forth from trucks with belching engines as they jockey into parking positions. Meanwhile, other workers stand around oil drums and warm their hands over leaping flames. The smell of coffee mixes with the smell of fish and the river as men stand around sipping coffee supplied by the three popular eateries: Sloppy Louie, Sweets and Carmine.

Carmine’s Restaurant, at 140 Beekman Street, is an exceptional place. Its friendly atmosphere is enhanced by the presence of Carmine himself, a man who possesses kindness and charm, as well as, a wealth of stories about the Market. He might even volunteer to take you on a personal tour of the Market, particularly of the central building on South Street where there is a staggering display of fish of every description.

The Seaport Museum, on Front Street, is making efforts to restore the area to its commercial and cultural stature. It conducts tours at 6 am after which a chowder breakfast is served.

The Museum itself is a collection of shops, galleries, piers and ships, which sum up the reality of the Seaport. It sponsors programs for children and adults and summer evening concerts which are performed on the pier.

For a small charge, visitors can take a three hour sail on the Pioneer, an 1805 Schooner. For more information call 766-9062

A short ride from Manhattan, off Cadman Plaza at One Water Street in Brooklyn is the River Cafe. This is no ordinary eatery, but an old navy barge converted into an elegant restaurant offering excellent atmosphere and continental cuisine.

The cafe is situated on the East River, immediately to the left of the Brooklyn Bridge, facing lower Manhattan. At night, the view is extraordinary. The downtown sky-scrapers emerge from the River as towers studded with lights. Tug-boats, pushing barges, silently slip pass your view as you sit looking through a large window at the dramatic interplay of nature and human effort.

A cobblestone driveway, lit by lampposts, leads to the cafe’s entrance. There is a cozy anteroom where one can sit at a small round table and listen to soft piano music flowing from the dining room.

Those with a penchant for the sea will enjoy the nautical decor of the dining area; the tables are crowned with bouquet of flowers and simple brass lamps.

The atmosphere is cordial and the fare is not for the budget conscious. Dinner for two easily approaches $100. In place of a menu, the waiters recite an extensive list of specials from memory. On my visit I tasted the striped bass in butter topped with lemon slices and capers and the Spanish shrimp with truffles were delicious. The salad Maison with vinaigrette dressing was refreshing while the seafood chowder was pungent and savory. On the disappointing side, the escargot were rubbery and the deep dish apple pie could have been a bit spicier.

For that special occasion or to satisfy the urge to splurge, the River Cafe meets the need. For reservations call 522-5200.