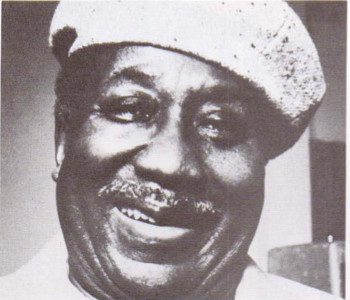 If it is almost a truism that Jazz has absorbed the blues, the extent to which Jazz and Latin Music have influenced each other is not always as well known. This year, the Newport Jazz Festival will feature (on June 30 and July 1) a two-part series entitled A Twelve-hour Salute to Jazz and its Roots, at the Saratoga Performing Arts Center in Saratoga Springs. The program of this salute, which rightfully includes bluesmen Muddy Waters, B.B. King and the unjustly neglected giant Antoine Fats Domino as well as Latin luminaries such as Machito, Dom Salvador and Willie Bobo thus emphasizes Jazz’s kinship to both the blues and Latin music.

Since root-searching has become a national pastime, it might be befitting, in view of Saratoga’s special concert, to unearth some of the roots of the United States’ most prolific music.

Jazz, the blues, Caribbean and Brazilian music — all represented in the twelve-hour salute — are the offsprings of Europe and, especially, Africa. Mandingas and Wolofs with their intricate string music; Yorubas, Efiks, Araras, Ashantis and Fons, with their elaborate rituals; Bantus from Guinea, the Congo, Angola and Mozambique, with their syncopated rhythms and vast array of percussion, and countless other African ethnicities contributed to the richness of black music in the New World.

New Orleans was the crucible in which Jass, as it was first called, brewed. To be contrary, Willie the Lion Smith argued that, in early days, Jazz was also pouring out of Baltimore, New York City or New Jersey, but any true New Orleans blood will tell you that when the Lion was just a cub, Creole musicians had been getting down on Basin, Perdido and Rampart Street for quite a while.

It is the brass and woodwind instruments brought by the French, adopted by Blacks and Creoles, which gave its impetus to the new musical form. Since then, the brass has always been the mainstay of Jazz, as Newport fans will well see in the likes of such honkers and preachers as Eddie Lockjaw Davis, Johnny Griffin, Illinois Jacquet, Charles Rouse, Grover Washington or Freddie Hubbard. Down south, brass bands soon became in constant demand on riverboats as well as for dances, parades, funeral processions and cutting contests. Parades, with their rousing rhythms and frenetic crowds, were the cousins of the Brazilian Carnival and pianist Dom Salvador, who grew up to sambas and batucadas, would have felt quite at home in Louisiana.

Besides saxophonists, trombonists and trumpeters, a staple of Jazz are pianists. It is also in New Orleans, this time in the red-light district mansions that the new breed of low-down, funky pianists developed. Jazz keyboard wizards and composers such as Jelly Roll Morton and Tony Jackson all started by working in the southern tenderloin circuit.

As for the blues’ legit introduction into the Jazz repertoire, we owe it to Mamie Smith who, in 1920, first put the blues on wax. Of course, Jazz already existed in seminal form in Negro spirituals and songs of field workers and stevedores, and Jazz, the blues and gospel have strong affinities, but it is not until Mamie that the lowly blues became standard Jazz fare. From then on, you couldn’t play Jazz if you couldn’t play the blues.

As for Latin music, New Orleans is really part of Caribbean culture, to wit gumbos, jambalayas, sensuous Creoles and other delicacies. In the 19th century, slaves on Congo Square had been dancing the bamboula, just as was done in Haiti, and playing the same jawbone and marimbula as the Cuban rumberos, and around 1850, Creole composer Louis Moreau Gottschalk had brought back from Cuba and Puerto Rico rhythms which later inspired ragtime pianists. At the beginning of the 20th century, the city was still as much Spanish as it was French. Jazz musicians had names like Palao, Trapiana, Perez, Tio, Mello, Nunez, Marrero or Loyocano, cornetist Bunk Johnson had a Mexican music teacher, and Freddie Keppard was blowing Panama, his pet tune, on Perdido Street.

In Cuba as in Brazil, musicians also early took to Jazz. Mario Bauza, Machito’s brother-in-law and co-founder with him of the famed Afro-Cubans was largely responsible for the development of Latin Jazz. Bauza worked with Noble Sissle, Chick Webb and Cab Calloway and was even instrumental in furthering the careers of Ella Fitzgerald and Dizzy Gillespie. Together, Mario Bauza and Machito brought such explosive sounds on the New York scene that when Charlie Parker was approached by Norman Granz to record with their Latin band, he jumped at the chance.

Bird and Machito’s combined efforts resulted in the phenomenal sessions recorded between 1948 and 1950 and recently re-released on the Verve label. Most tunes were done in one take, and it is difficult to top the exhilaration of the performers. Brazilian music became the rage in the Sixties, but the polite bossa-novas of Stan Getz and Charlie Byrd, who reaped most of the credits and financial rewards, had nowhere near the vitality of Brazilian pianist Dom Salvador.

With Jazz agonizing in the throes of fusion and disco, its new life may well come from Dom and other truly creative musicians who have doubly benefited from exposure to Jazz and to authentic Latin music. Cinnamon Flower, the band organized by Charles Rouse and Dom features compositions by Dom as well as by compatriots Amaury Tristao and Milton Nascimento. I’ll let you enjoy for yourselves the beauty of the music they play. Cinnamon Flower is as removed from supermarket bossa-novas as the Machito-Charlie Parker team is from Xavier Cugat and Charo. Percussionist Willie Bobo is another sensational and underrated exponent of the Latin Jazz idiom.

And with heavy weights like Carmen McRae, Betty Carter, Art Blakey, George Benson, Roy Haynes, Roland Hanna and Dizzy Gillespie (another pope of Latin Jazz) manning the front lines and stoking the furnace, Saratoga promises t0 be a hell of a get-together.