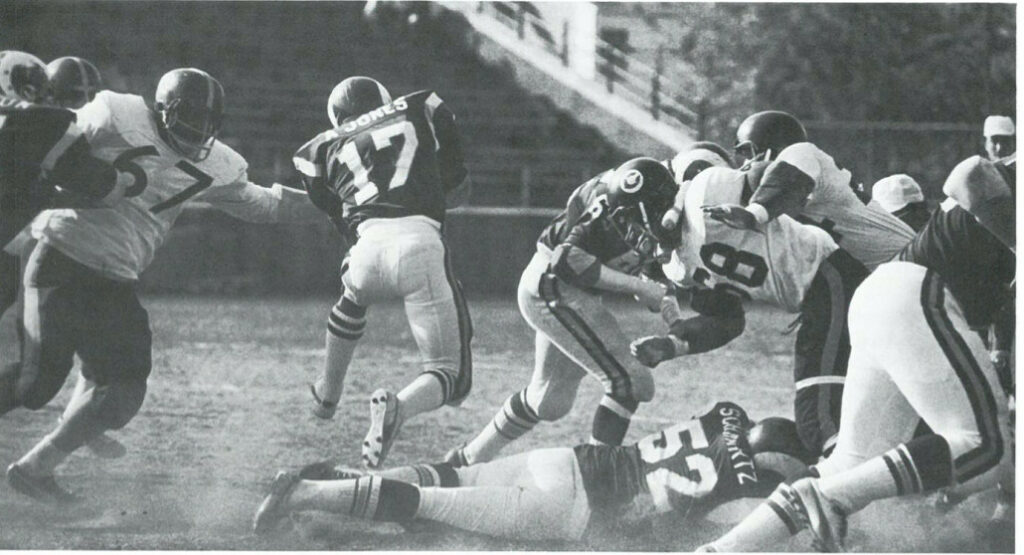 When the chill gets in the autumn air and the leaves begin to turn color, you get that special craving for the color and fanfare of cheerleaders, the screaming of loyal partisans and the grueling battle that takes place between the local heroes and the menacing enemy team.

But in the last few years you’ve had a problem. Ticket prices at the big stadiums are too high; the records of the local professional teams are too disappointing; and now gas _ lines could be as much a part of the scene as offensive and defensive lines.

Don’t despair! There is an answer. Minor league football!

The Mid East Football Conference is alive and well in the New York metropolitan area. In Brooklyn, New York—Hempstead, Long Island—Bridgeport, Connecticut— East Rutherford and Plainfield, New Jersey, the local heroes play for their honor, not money, every weekend from September 8 thru November 25 to the delight of the devoted, enthusiastic crowds. Ticket prices are low ($2-3 for an afternoon of fun), the games are exciting and the action takes place right in your own backyard.

Although it may be the biggest football secret this side of the Pacific Ocean, the MEFC has played some of the strongest minor league football in the nation for the past twenty years. A weekly professional football magazine has consistently ranked several of the teams among the top 20 of the estimated 500 minor league organizations in the country.

Don’t confuse minor league or semi-professional football with the sandlot game. These aren’t youngsters or a bunch of guys playing for beer and laughs on a Sunday afternoon. They are adult amateur athletes of the highest caliber, many with major college or professional experience, playing with professional equipment and competent coaching staffs and exhibiting professional techniques.

This is good, crowd-pleasing, hard-hitting football!

When you talk to the guys who play, you easily understand why they haven’t taken up golf or tennis or sunbathing. There’s a love of the sport, a camaraderie with their teammates and a pride in their hometowns that continues to drive them beyond accepting the usual mundane life that comes with a few extra years.

Mike Bonham, quarterback for the Brooklyn Kings, is a youth worker at the Bedford-Stuyvesant Restoration Corporation. A graduate of Allen University, he also coaches four Pop-Warner youth football teams. In 1978, he was the MEFC’s Most Valuable Player, leading the Kings to first place with an 8-1-1 record and a national ranking. But why, at 30 years of age, is he still playing? There’s a thrill of performing in front of your family and friends that I can’t exactly describe, said Bonham. What I teach my kids about football and leadership and responsibility during their practices, I can show them myself on Sunday. And it really pays off when a kid goes through high school, gets into college and remembers that you helped to get him on the right path.’’

La Verne Hunter, coach of the Plainfield, New Jersey Oaks, played football at Shaw University. There’s a certain life that this kind of football lends to a community. When you get guys who have gone away to school and returned home, or guys who have never left the area but want to give something back, it’s gratifying to see the faces of men you knew as children and their parents back together again. And, as time passes, their wives and children maintain an organization that develops into a family. It becomes more than a sport. It becomes more than just Sunday to Sunday. It becomes a way to better the community.

Rudy Hughes, assistant to the public relations director at Madison Square Garden and a guard on the Brooklyn Kings, finds a special unity in playing a so-called kids game well into adulthood. There’s something special about 50 guys getting together three or four times a week and playing on Sunday when there’s no money involved, he emphasized. These guys do it out of their love of sport and each other and for the fun of it all. And maybe that’s what makes this brand of ball better than professional sports. There’s not a dollar sign connected to everything. It’s not a question of business. It’s a matter of heart!

The players in the MEFC are nonsalaried. The philosophy of the league has always been to serve the community by playing benefit and charity games for local causes. In the past, members of the league have played benefit games for such organizations as the NAACP, the Brooklyn Sickle Cell Fund and Save Amateur Sports, a_ citizen’s recreation interest group.

So, go out and support the Brooklyn Kings or Brooklyn Mariners! The New Jersey Rams or Oaks could use you in their cheering section. The Bridgeport Buccaneers and the Long Island Jets have a seat just for you. The action is fast. The price is right. The talent is usually homegrown, and it’s all right in your neighborhood.