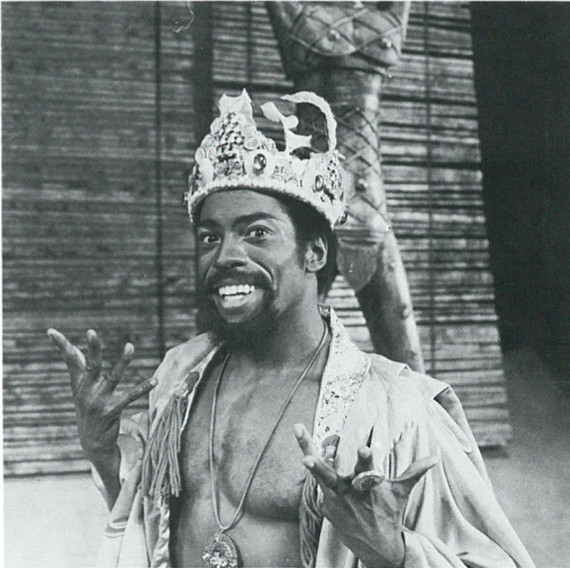 Ira Hawkins, late of  Timbuktu!, was one-third of the slick and professional cast of the musical tribute to Broadway producer Cheryl Crawford at the St. Regis Hotel’s King Cole Room. Too bad that he’s off on a round-the-world cruise and can’t enjoy all the applause he deserves.

If Miss Ann saw Miss Ann, Don’t Cry No More, at the Black Theatre Alliance recently, she might have had to fight back tears — not because it was moving, but because it was so long and clichéd. The stage was rife with prostitution, miscegenation, lost love, no love, unrequited love, cramped urban living quarters — it became a map of theatrical facsimiles.

The play is set in a boarding home, run by earth mother, Naomi, a woman, wise from heartache (her lover had been lynched years earlier), playful in spirit, and a peacemaker by profession. Her tenants include James Bean, a once handsome older man treading muscatel but still able to spout Shakespeare, Hughes, and all the poets he is not. There is Sue Sullivan, a pretty young woman, and mother Raye (‘‘Miss Ann’’) and her 16-year-old daughter Betty Jo.

Playwright P.J. Gibson has succumbed to melodramatic lines and situations to the point where laughter is all that’s possible. The play’s climax — a death scene —contains a triumvirate of stock responses which affirm the play’s careful attention to the themes of so many other plays.

Gibson has given Sue some lively dialogue that occasionally compensates for Naomi’s ‘‘I am history” syndrome and Raye’s premonition of danger. “Naomi, I got this bad feeling that something’s going to happen.”

Director Bette Howard, a sizzling actress with The Family and usually an accomplished director, strikes out here by feeding into the play. A wig-pulling scene (a staple for a laugh), is thrown away as quickly as the wig is tossed. Minnie Gentry — one of the great over actors and under-thinkers — rises above herself to create a rather charming old lady who can shuffle her bum or stab a man in the behind with a knitting needle. There’s a variety to Gentry’s performance that she usually doesn’t imbue.

Bill Cobbs, as the modern-day Shakespearean fool, is good. He and Vickie Thomas, as Raye, strike up a smoothness in their ensemble scenes, showing they are two pros who know how to give and take from each other. The role of Sue Sullivan is an easy one. This character — the freewheeling woman as a model of comic relief, offers an unrestrained field day for any actress worth her salt, and Brenda Denmark is worth the entire shaker.

Finally, though, there is Kim Weston Moran as the teenager. She combines the restlessness of youth with an amazing sense of timing and modulation. In a stereotypical role, she is unusually good. Unfortunately, these performances don’t improve the play or the pacing. They serve only to make them all the more noticeably off. But remember the names. You’ll hear from them again.

Meanwhile, around town, Chip Garnett, who sang Sophisticated Lady in Bubbling Brown Sugar, just ended an engagement at Mickey’s Cabaret on West 54th Street. He was easy to listen to, but didn’t put his personal stamp on enough of his Ellington and Sondheim material…

Esther Rolle returns to Broadway in Horowitz and Mrs. Washington with Sam Levene. She won an Emmy this year for a single performance, but one need only watch the reruns of Good Times on television to see how difficult it is for her to speak in a flowing, straightforward sentence, let alone give it special meaning. Frances Foster, one of Rolle’s colleagues in the Negro Ensemble Company’s first seasons, was up for the Broadway role, but lost out to Rolle. Foster is what Rolle is not — simply one of the world’s great actresses. Ah well, Broadway!