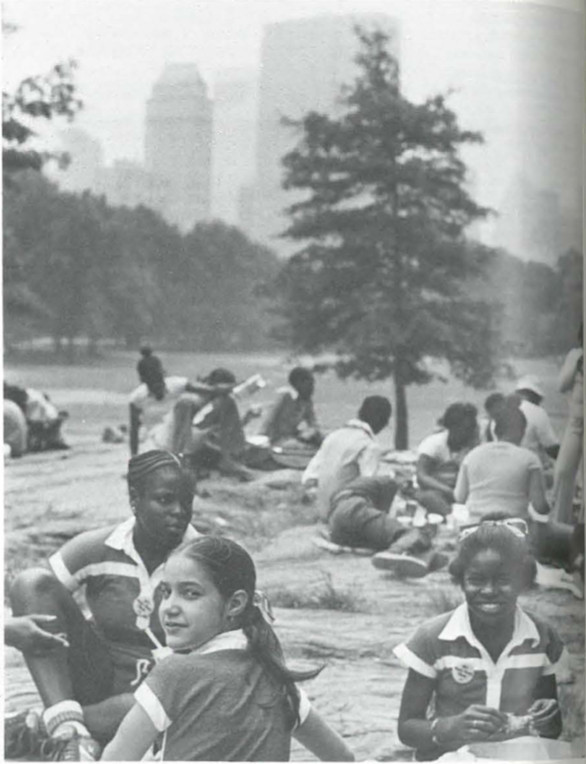 It’s a typical hot, humid summer day in New York. The house is stuffy. The next door neighbor has a new stereo and she’s testing her 75 watts-per channel Harmon-Kardon. Things are getting a little nervy. Movies are too trendy, it’s too early for a disco, and the museum is a little too cramped for a Saturday afternoon. What to do? How about Central Park!

Central Park can often be that much needed respite from a humdrum work week. With its zoos, model sailboats, skating, carousels, pony rides, marionette shows, landscapes, jazz duets, and other free-wheeling musicians, the park has so much to offer, which is why children’s eyes light up when a visit is in store.

Most people do not know the origins of Central Park. Robert Finkelstein, in a new book about the park, tells us, Central Park has a plan—a country within a city. Since it was the first urban park built in the nation, it served as a blueprint for many other parks, including Golden Gate in San Francisco and Fairmount Park in Philadelphia. Each aspect of the scenery was carefully planned to create a feeling of the peaceful and sedate country living, that some of us have never had the opportunity to experience.

Central Park is more than just a huge area where thousands picnic, litter and wander about aimlessly. It offers, especially for children, a host of culturally enriching activities. The Sunroom at The Boathouse, offers a free performance series for children and parents. In the past, they have had storytellers, dramatic presentations and puppet plays. And, of course, there are numerous sideshows such as the fire eating act, which has its usual place near the gates at 63rd Street and Fifth Avenue. On Sundays, students from the Juilliard School of Music play their instruments along the paths that lead to the band shell near 72nd Street. The Program at the Dairy, located at 65th Street, just west of the zoo, also has many programs geared to enrich the lives of urban offspring.

For the do-it-yourself parent, the park offers almost every type of nature oriented project possible in the north-eastern region of the United States. You can find a Chinese elm and a glacier that was formed almost a million years ago!

Many city dwellers have never seen the scarlet tanager, the kingfisher fishing in the 74th Street Lake, nor the red shouldered hawk circling over Vaux’s Bow Bridge, but they are there, right in the middle of one of the park.

It’s one of the few urban parks that have bona fide Park Rangers complete with their Smokey the Bear rangers’ hats! Much of the excitement that goes on in the park happens thanks to the people who work behind the scenes, including Finkelstein, whose book was published by the Central Park Task Force, a non-profit organization. The book is written for the teacher, parent and student, with an interest in the park that goes beyond the obvious, to offer insights into the little things that make the park so special. Perhaps you can distinguish between an oak and maple tree, but have you ever thought that the park can help a lost tourist find his way of the maze of trees and paths? There are four numbers on every lamp post that are a key to finding the closest cross street.

The park, however, would be of little benefit to anyone without a good municipal manager to oversee its operation, especially in times of budgetary constraints, when, according to City Planning Commission Chairman Robert Wagner, Jr., repairs in the park will have to be put off until after the year 2000. Commissioner Gordon Davis is doing the best he can with the tools at his disposal.

In the two years since his appointment, Davis has revamped the entire parks system. “Morale is up, despite a smaller labor force,” he said optimistically.

Davis has been in the city’s political arena since 1967, when at the age of 26, he assumed the position of assistant budget director under then Mayor John V. Lindsay. A native of Chicago, Davis studied architecture and political science at Columbia University and received a law degree from Harvard University.

Davis says that he came to the parks department when morale was low and the people in the department felt that they were being ignored by City Hall. “I wanted the employees to know that they were performing a needed service.” Davis promptly set out to revamp the entire system. Today his department is one of the only municipal agencies where the ethnic composition of New York City is reflected on all levels. Morale is a great deal better now only because the workers feel that they are accomplishing something.

Nonetheless, the struggle for more city money is a constant raging battle that Davis wages with the city fathers. “You have to be rational, though,” he cautioned. “It’s not easy to ask for more money for various projects when the police, fire and sanitation departments are working at less than full capacity.” Davis admitted that the days where every park has its own recreational director, are over. But on the other hand, he is intent on using all available resources to the maximum.

But no amount of supervisory skill and fiscal acrobatics can substitute for the care each one of us must take in preserving this oasis within the glass and steel of Manhattan. Park employees suggest little things, like picking up your garbage, not breaking off leaves and buying your firewood from a store instead of seeing the park as your supply center, would help preserve the beauty of what is Central Park. “And,” says another employee, raking up dead wood near the Delacorte Theatre, “the same sense of civic responsibility must apply to all the city’s parks.”