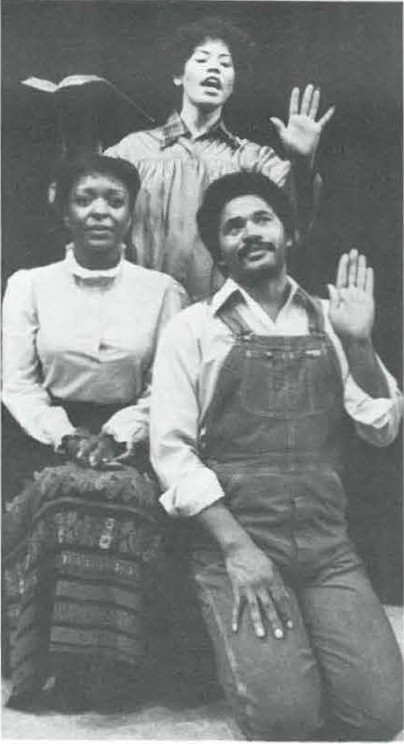 Broadway not only represents the establishment, commercialism, and compromise; but also exposure and some sort of analysis. So a whoop should go up for the Samm-Art Williams lyrical ode, Home, which has moved from the off-Broadway Negro Ensemble Company to Broadway’s Cort Theatre.

It is the story of Cephus Miles, a young landowner in North Carolina, who loves his land, his family, and young Pattie Mae. She goes off to school, he goes off to jail for refusing to go to Vietnam, and life’s plans are in disarray.

Cephus eventually is lured by the noise and lights of the big city, to the land were blues and jazz cry all night long, and heads for a very, very large American city. It is all the New York’s, all the Los Angeles’s—all the places far away from a tranquil country home. Soon he needs the roots to pull him back to his feet.

The play is basically structured as a stream-of-consciousness narrative. Miles reminisces and narrates, and the people move in and out of his story, some to return, others never to be seen again. The author often uses poetry to represent the past, the lure to the city, and as a rhythmic ritual to tease Cephus’s memories of the land he left behind.

Charles Brown is excellent as the youthful, somewhat naughty but principled Cephus. He is both funny and sympathetic, richly complemented as a character and as an actor by Michelle Shay in the role of the various women in his life. Shay, who two years ago would have been at her best in retirement, has worked at her craft and deserves the recognition she is now getting,

Horowitz and Mrs. Washington closed at the Golden Theatre in early April after playing for less than one week. The play, about a retired Jewish bigot, portrayed by Sam Levene, and his attending nurse, Esther Rolle, had a predictable plot and in the eyes of many observers offered only a weak treatment of the anti-prejudice theme…

Bertolt Brecht’s Mother Courage has undergone a new American adaptation by Ntozake Shange, the author of the Broadway hit, For Colored Girls Who Considered Suicide… Her version is currently running at the Public/Newman Theatre of the New York Shakespeare Festival on Lafayette Street. Morgan Freeman, Tony nominee for The Mighty Gents, and Gloria Foster, of Coriolanus, head the cast under Wilford Leach’s direction…

The musical Reggae closed April 13 after running only eight previews and 21 regular performances at the Biltmore Theatre. Producer Michael Butler, in what may be a Broadway first, plans to reopen the musical in early June at another theatre after necessary script revisions have been made…

Antonio Fargas was signed to perform in Paramount Picture’s The Roast, after Sherman Hemsley dropped out of the lineup before its Boston debut. The Carl Reiner comedy opened at the Winter Garden Theatre May 8…

The More You Get, The More You Want, which recently closed at the Black Theatre Alliance deserves to reopen anywhere as soon as possible. Produced by the Frederick Douglass Center, this snappy, pointed parable about the fulfillment of life’s dreams, is one of the best musicals of the season. Although adapted by Dan Owens from a Robert Louis Stevenson story, you can hear Peter Allen’s Don’t Wish Too Hard threading the fabric of the tale.

More… is a joy and a blessing, and technically one of the most professional off-off Broadway shows in ages. It succeeds thanks to Otis Sallid’s crackerjack choreography, Bernard Johnson’s costumes, and Lucia Victor’s direction whose schizophrenic career has ranged from the horrors of Pearl Bailey’s revival in Hello Dolly! to the liveliness of AMAS Repertory’s Helen.

In the story, a snack vendor buys a bottle of Mateus Rose that is inhabited by an imp, who grants wishes and tries to teach his partners the real values of life. Of course, Darryl Stewart (Nat Morris) eventually gets too greedy, even after he realizes that one man’s rise is another’s demise. Johnny Brandon’s score is sizzling composite of ballads and production numbers. Two songs, however, are derivative: a manager’s Slow Burn seems to copy Shall I Tell You What I Think Of You? from The King and I, and Songwriter is Songbird from an old Barbra Streisand album, But the cast is just fabulous. Special cheers for Jeffrey V. Thompson as the imp, Morris, with his amazing vocal range, his sidekick Ben Harney, whose hands are as expressive while dancing as in dialogue, Kimberly Vaughn as the manager and Brick Hartney as a fake evangelist trying to make it in the music industry.