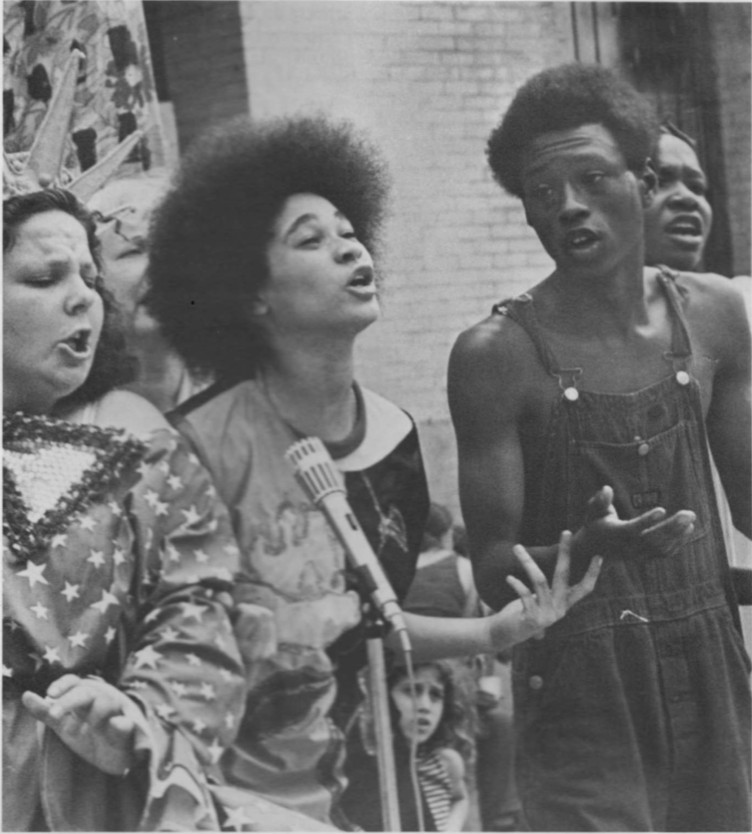 While many New Yorkers skip town to escape the summer doldrums, and others manage to get out or a couple of precious weekends; most of us are here, assigned the arduous duty of guarding the city. Sure, even during the hot summer there’s entertainment around, but it takes extra energy—the kind that is sparse in 95-degree heat.

There is an easier way out, though, and it may come to your neighborhood or block and it is brought to you by the Theatre For The New City.

For the last ten summers, this grassroots, community-oriented theatre group has brought its brand of entertainment to the neighborhoods of New York. Their musical comedies have become very popular and their social themes, which in the past have included transit fare hikes, Con Edison and Westway, treated in earthy fashion and simple language even manage to tear the kids away from the fire hydrants to the foot of their mobile stage.

“In 1970, we developed our street theatre program,” says Crystal Field, a director of the theatre. “We thought of our outlandish concept of street theatre as a vehicle which could bring poetic, socially conscious drama to the neighborhoods of New York.” The troupe sang, danced, juggled, clowned around and took jabs at very controversial issues — issues that always touched on the needs of the communities. “Our plays have not only a political and social tone, but also are really slanted toward Black and Hispanic cultures,” Field continued. “When we play in predominately Hispanic neighborhoods, we often change the dialogue of our plays. When we play, she adds, they roar with laughter at our jokes about the establishment. After all, these people are winging through the social and political problems we satirize.”

In the summer of 1978, the theatre group presented The Time They Turned the Water Off, a story about the mounting cutbacks in services in New York. At the rate the cuts were being ordered from City Hall and Congress, it was only a matter of time before some politician would turn off the water. One might say the theatre has its hands on the pulse of what’s happening in New York’s neighborhoods. Their 1978 production, conceived and written in the spring of that year, contained a scene about a blackout that was to become a fierce reality only a few months later.

This summer, the TNC will present, The Greatest Mystery of Oil, a musical comedy written by George Barstenieff and Crystal Field, the TNC directors. The story revolves around the antics of a rich white woman, played by a black actress — TNC loves to switch roles,  who hires a detective to find out what’s causing the price of oil to go through the ceiling. (Wouldn’t we all like to know!) Her search takes her around the world, unveiling how curiously high oil prices are interconnected with the surging cost of food, rent, and inflation in general – in Ms. Field’s words, “The oil companies get it in the end.”

Ms. Field attributes the success of the traveling summer shows to a basic desire on the part of the participants to serve the community through the medium of theatre. “We get up on the stage and enjoy ourselves, making the performance look effortless, when it actually takes ten weeks to properly rehearse each show.” (The show’s cast is comprised of performers who have been with the repertory group from its inception and those selected at yearly auditions.) “The combination,” asserts Ms. Field, “revitalizes us year after year. We’ve played in all five boroughs, we love performing for the communities, and we’ll play anywhere. Just call us and request us in the spring and we’ll be there in the summer!”

Setting up their traveling show on your block is not the only venture of the theatre. It also conducts a yearly workshop, staffed by actors, actresses, jugglers, clowns and the like. Youngsters from the New York metropolitan area are encouraged to attend these workshops where scripts for the upcoming summer shows are developed and invaluable performing experiences can be attained. The TNC’s theatre, at 162 Second Avenue, also provides a place for up-and-coming playwrights to showcase their works

My initial contacts with TNC weren’t particularly fruitful. I almost got the impression that the theatre, perhaps, didn’t even exist. Phone calls often unanswered and staffers were either late for appointments or missed them entirely. Neile Weissman, director of the CETA Artist Project in residence at TNC, offers an explanation: “Running TNC at this point is like running a $200,000 organization on a $150,000 budget. Only our organization operates on much less. We’re supported almost solely by grants, donations and by federal funding, including the Comprehensive Employment and Training Act (CETA).”

“As the government moves to balance the budget and cuts spending, CETA programs, which provide jobs like mine, are cut,” Weissman continues. “Thus, the efficiency of TNC drops. The staffers that are left are forced to work extra long hours, the program has to depend more on volunteers, and TNC begins to look like a program run by incompetents who don’t care, when actually we do.”

Weissman’s own salary line has been eliminated and the work put in now is strictly on a voluntary basis.

Shortly after our interview, ROUTES learned that the New York Council on the Arts had just cut funding for TNC’s Street theatre.

Nonetheless, as the saying in the business goes, the show must go on. The actors will work for free. The first performance of  The Greatest Mystery of Oil? will take place on 10th Street and Second Avenue, and the last performance will be offered in Washington Square Park, with dates in between scheduled throughout the five boroughs. For exact dates and places call or write, Theatre for the New City, 162 Second Avenue, New York, NY 10003, or call (212) 254-1109. There’s plenty of time to request TNC’s traveling road show to visit your neighborhood this summer or next year.

So it seems that there is at least some compensation for being a trustee of the Big Apple during the summer, and TNC provides it for us right at our doorstep. Who could ask for anything more? How about air-conditioning?