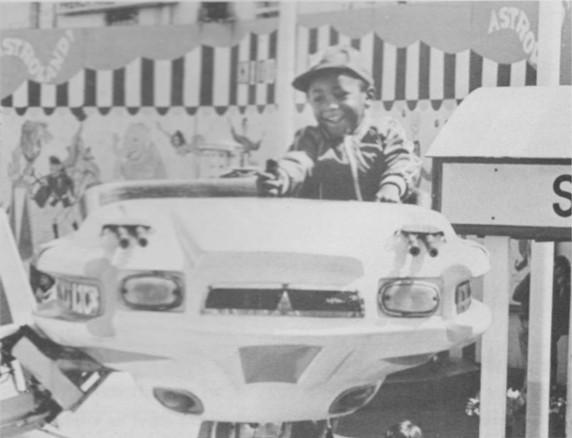 New Yorkers have two main reasons to make the trek to Coney Island: the beach and that notorious roller coaster with the do-or-die first dip, the Cyclone.

While the beach hardly rates as one of New York’s better ocean side retreats, the amusement park continues to stand on its own merits. A couple of years ago, Astroland, Coney Island, was designated the metropolitan area’s leading amusement park in a survey conducted by a major daily newspaper. What most thrill riders are perhaps unaware of is the fact that the amusement park can look back on a long tradition. Its predecessors include Dreamland Park, Luna Park and George C. Tilyou’s Steeplechase Park, which opened its doors to the public in 1897 and remained a crowd drawing attraction until 1964—two years before it was reopened as Astroland.

The energy shortage has focused renewed attention on Coney Island. For only one subway token, youth of all ages can make it to the Cyclone.

Gary Kyriazi, author of The Great American Amusement Park described the Cyclone as a New York tourist attraction rivaling the Statue of Liberty and the Empire State Building. Time magazine reported that two years after he crossed the Atlantic, Charles Lindberg took a spin on the Coney Island Cyclone, one of the oldest roller coasters still in operation. Later, he testified: “A ride on the Cyclone is a greater thrill than flying an airplane at top speed.”

That was over fifty years ago. After half a century, the thrill—and the terror—of the Cylcone has not diminished. The Guinness World Record in consecutive roller coaster riding was established here. According to Kyriazi, it never stops or slows for a second after it leaves the lift. Its drops, turns and twists are unsurpassed in the coaster world, and it is as smooth and graceful as a seagull.

Dewey Albert, who built and operates Astroland, has structurally rehabilitated the Cyclone so that it is said to be in even better condition today than when it was first opened in 1927.

Jerry Mendito, the operations manager, walks the tracks of the Cyclone every morning to inspect its rails before running an empty train around the track several times each day before the coaster is opened to the general public at noon. The Cylcone has built-in safety features, including a safety bar that protects the passengers during the course of the ride which creates the effect of zero gravity during its first murderous dip. The safety bars are closed by an attendant and cannot be opened by the coaster’s occupants until the attendant releases them after the ride. If the safety bars are not locked, a triggering device under the coaster cars automatically stops the ride on the chain belt which lifts it to the top.

Equally important is general maintenance, which is a year-round project even though the park is opened only from Palm Sunday through the week after Labor Day. All of Astroland’s rides are load tested with 180 pound sacks of onions or potatoes before each season, and are regularly reinspected all season long.

Astroland features a complex of rides and other attractions if the Cylcone makes you too dizzy. The Flume Ride is a water borne roller coaster where the ride on water-propelled logs has proven to be a refreshing novelty for young and old alike. Although it has twists and turns as well as drops, it is sufficiently tame so that one can often see parents with infants enjoying its salubrious attraction.

Also featured are the Double Diving Bells, which consist of two steel spheres with glass portholes through which occupants can view a simulated sea bed as the spheres immerse in a giant tank of water. When the spheres pop out of the water, the resultant water spray provides an exciting experience for viewers as well as an exhilarating feeling for the occupants.

In contrast, the Astrotower, a cabin that circles around a central column, rises 290 above Coney Island to afford a view of the Verrazano Bridge and the Empire State Building.

The Wave Swinger and the Enterprise are two other leading ride attractions of the contemporary outdoor amusement industry which are unique to Astroland Park in Coney Island. The park has other traditional adult rides as well as a full range of Kiddie Park rides.

Among the Kiddie Park rides is the Big Apple Kiddie Coaster which features a caterpillar shaped train riding through a big apple. One of the children’s rides which pre-teenagers seem to find particularly exciting is the Mini Air Ship— where a joy stick in each plane enables the youngsters to raise and lower their plane as it circles round and round at the end of a steel arm. The Kiddie Merry Go-Round with its miniaturized horses sometimes finds adults riding it along with their children.

Admission to the midway is free. From Monday through Saturday afternoon, Astroland features a Pay-One Price policy, permitting patrons to ride any of its major attractions, including the Cyclone, for as often as they wish for $7.99 from 12-6 p.m. or from 4 p.m. until midnight. POP does not apply Saturday nights, Sundays nor holiday weekends. Group rates are available for organizations, day camps, and even block associations. This year, a special nontransferable $2 gift certificate is also available.

Astroland opens daily at noon. On weekdays, it normally closes around midnight, and on weekends, the thrills, spills and chills go on until two or three o’clock in the morning.