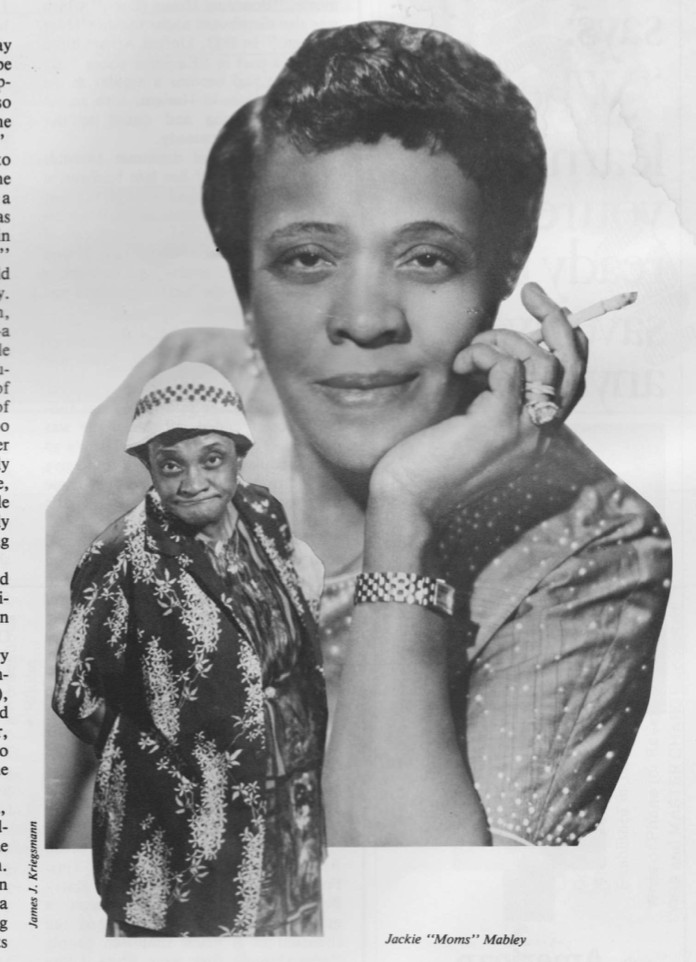 Jackie “Moms” Mabley used to say she left home for the stage to escape a marriage forced on her by a cruel stepfather. “That stepfather,” she said, “was so old and weak that somebody threw one grain of rice and it knocked him out.”

She told a reporter that she got into show business as a teenager because she was pretty and didn’t want to become a prostitute. “The cleaner version was that I prayed and it came to me more in a vision than a dream: Go on the stage.”

Moms was the favorite dirty old lady of stand-up comedy in her days. Her bulging eyes, toothless grin, bullfrog voice, and hilarious costume—a housecoat, floppy hat, droopy Argyle socks and oversized shoes—kept the audience in stitches, or busting out of them. Hers was an ad-lib routine of songs that one critic termed uptempo bullfrog. She was also famous for her jokes about ugly old men—so ugly that one had a job in a doctor’s office, standing by the door making people sick. Her favorite line was “The only thing an old man can do for me is bring a message from a young one.”

It wasn’t unusual, either, to find Moms on an awards program on television, eyeballing one of the pretty men on stage.

Moms Mabley was born Loretta Mary Aiken some time in the 1890s (She claimed not to have known the exact year), one of 12 children in a town called Brevard, North Carolina. Her father, Jim Aiken, was an entrepreneur, who owned several businesses, including the town grocery store.

She was of black, Cherokee Indian, and Irish ancestry. Her great-grandmother had been a slave, and was the source of Moms’ religious inspiration. She would tell Moms to put God in front and go ahead. Moms was a devout Baptist who always attending church, or at least watched Oral Roberts on television.

Although born in North Carolina, she considered her home to be the Anacostia section of Washington, DC She also lived in Cleveland, Ohio for a time.

Moms was discovered by the dance team Butterbeans and Suzie. They brought her to New York in the mid 1920s, where she made her debut at Connie’s Inn.

Moms later became a favorite at the Cotton Club in Harlem and the Club Harlem in Atlantic City where she appeared with Louis Armstrong, Cab Calloway, Count Basie and other big names.

Moms took the name Jackie Mabley from a boyfriend, entertainer Jack Mabley. “He took a lot off me,” she once said. “The least I could do was take his name.” She earned the nickname Moms from her maternal way of speaking to her audience and from the way she treated fellow performers, referring to them as her children.

In the early 1930s, she broke into motion pictures, appearing first in the 1929 movie, Boarding House Blues, which was also distributed under the title Jazz Heaven. In 1933, United Artists hired her for a part in Emperor Jones. By 1939, she had become a regular at the Apollo Theatre in Harlem, with an act that added song and dance to the regular stand-up comedy.

New York-based drummer Marquis Foster, a friend of her late husband’s, once said, Moms had a tough life just like all the black entertainers. Moms herself once remarked, “I don’t care if you could stand on your head. If you was colored, you couldn’t get no work at all outside of the black nightclubs and the chitlin’ circuit.”

Moms gained her popularity through what has been described as authentic humor.

“Everything she said to me was funny,” Foster added, “because she was original. That’s hard to be. There’s so many people copying. You’ve got to give the old timers a little credit. They came up in worse times than you and I. That’s what I think about Moms.”

When she finally gained national recognition, many comics would sit in the audience either at the Copacabana in New York or at the Kennedy Cultural Center in Washington, ostensibly to take notes. It took her almost half a century to get that kind of recognition. It was mostly her recording that brought her into the public eye. In 1960 she began recording for the Chess label. Her first album, entitled, Moms Mabley—The Funniest Woman in the World, sold over one million copies and was certified gold. She was later signed by Mercury in 1966, and her LP Now Hear This, became a stag party hit.

Moms made her television debut on April 6, 1967, on a show called A Time For Laughter, produced by Harry Belafonte for ABC. Moms played a maid, and the program explored the situation of a black suburban couple who thought they were white. She was a guest on several television shows, including the top contenders of the day: Merv Griffin, Smothers Brothers, Mike Douglas, Bill Cosby, and Flip Wilson.

However, she declined to appear on the daddy of them all, the Ed Sullivan show, because, as she put it, “Mr. Sullivan didn’t want to give me but four minutes. Honey, it takes Moms four minutes just to get on the stage.”

Even though she disagreed with the tactics of the burn-baby-burners of the 1960s, her act increasingly became influenced by the issues facing a troubled America. On stage, she began to have fictional conversations with President Lyndon Baines Johnson and other leaders. She would sometimes begin the act with a telephone call from the President and say to him, “what do you want, boy?”

The four national leaders she admired most were Adam Clayton Powell, John F. Kennedy, Robert F. Kennedy and Martin Luther King, in whose honor she would often end her routine to leave a stunned audience in absolute silence. Later, her interest in controversial subjects of the day became even stronger, and she once stated that the country’s problems could have been avoided if the government had heeded the Ten Commandments.

Moms became a movie star in 1974, when she headed the cast of Amazing Grace, as Grace Teasdale Grimes, a dauntless little old lady who cleaned up City Hall by outfoxing the corrupt politicians and succeeded in getting a good black man elected mayor of a major eastern city.

There was criticism of all kinds. Some claimed it was too racist for some whites and in a difference sense, too racist for the black militants. The only share of criticism that Moms got personally was that it had taken too long for her to star in her own movie.

During the filming of Amazing Grace, Moms suffered a heart attack. Also during that year, her second husband, Ernest Scherer, a New York businessman, passed away. They had been separated for 20 years. “They weren’t living together at the end,” Foster said. “But every time she was in town she came to see him. It was a warm, friendly feeling between both of them.”

They had three daughters and one son, six grandchildren and seven great-grandchildren. Moms lived with her youngest daughter, Bonnie, in a mansion in Hartsdale, New York.

“Moms was very congenial, warm and well-liked, but like everyone else she had her ins and outs,” Foster confided. Every time I’d see her she was very happy. Toward the end, she was a little sick, which naturally made a difference, but she was a great woman and a great entertainer.”