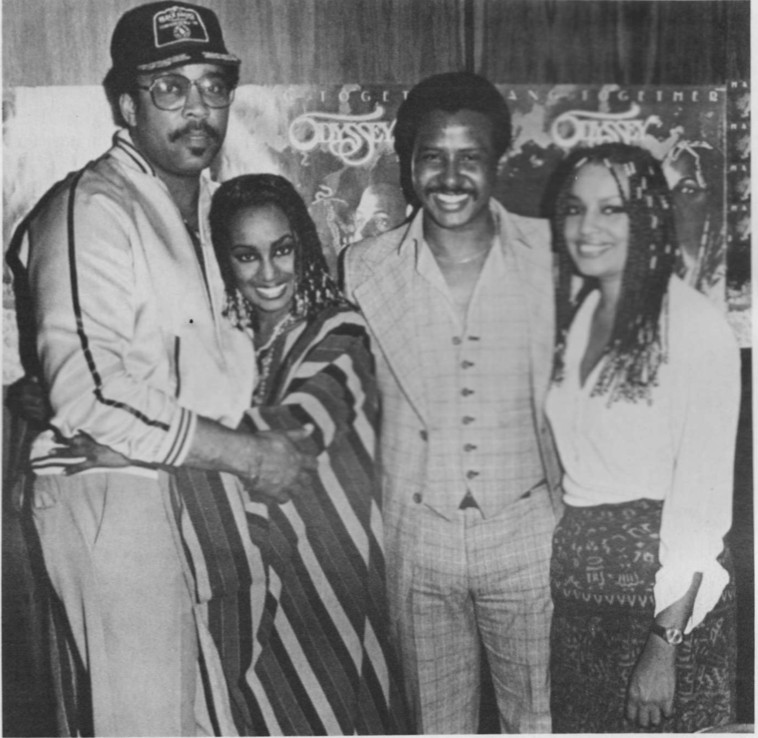 The twin-engine Beechcraft commuter plane was banking and turning over the dark skies between Washington DC and Baltimore, and I was on board cautiously approaching my rendezvous with Odyssey.

But the 25-minute hop from National Airport was an odyssey in itself. I was used to big jets and this particular ride in a contraption no wider that a Volkswagen — filled to capacity with 15 passengers — was not quite what I had imagined when I made reservations.

As we hovered a mere 2,000 feet over Maryland, all the bad jokes about air travel crossed my mind. The rhythmic drone of the rattling engines appeared so slow, that it seemed like it took an eternity for the brightly illuminated Washington monument to vanish from sight. I wanted to stand up and laugh — but you can’t stand up in a Beechcraft! So I sat there biding my time humming Native New Yorker and tried to concentrate on the upcoming interview with Odyssey.

From the airport, I got the scenic late night tour of Baltimore from Odyssey’s road manager, as we moved toward our final destination: the rehearsal studio were Odyssey — Lillian Lopez, her sister Louise, and newcomer Billy McEachern — were feverishly preparing for their first national concert tour.

The studio was housed in a storefront at the corner of Vineyard Lane and Greenmount Avenue, next to a parole office. The People’s Free Medical Clinic was a few houses up the street and a veterinarian across the way.

From the outside, there was little activity, but inside, a group of Baltimore musicians were cooking. I noticed Louise first, as she sat on a stool tapping her feet to the rhythm. Billy was seated on the floor counting out the 34 measures for his cue and lead singer Lillian was flashing a smile, positioned in front of the band, occasionally giving directions and smiles of approval as the agony of rehearsing continued on into the night. At 1:30 in the morning, the ordeal was over and Louise, Lillian, and Billy, tired as they were, were ready to talk.

For the next two hours, in the quiet of a comfortable living room, the somewhat bizarre story of Odyssey unfolded . Originally, Louise and Lillian, plus a sister, were known as the Lopez Sisters, a self-contained group that managed to get by in the nightclub circuit.

Then the sister retired to married life, Tony Reynolds joined, and four years ago, Odyssey was born. In 1976, they scored big with the hit, Native New Yorker. But nobody ever got to see Odyssey on stage. Rumors began to spread in the industry that the group seen on the cover as Odyssey, didn’t really exist and that the threesome didn’t sing the song since they apparently couldn’t come onto a stage and sing it live. There were, in fact, no live performances, and the group wandered into oblivion, released a second album that did nothing, and just recently bounced back with a new album, Hanging Together, and a hit single, Don’t Tell Me, Tell Her.

“I feel born again on the strength of the new album,” Billy beamed. Though he hadn’t sung on Native New Yorker, and thus had never tasted the success of a chartbuster, he had gone through the bad times.

As Lillian, the outspoken one of the group declared: “They didn’t need us to go out on the road.” They, referring to Tommy Motolla and Champion Entertainment, who functioned as producer, manager—the works. Lillian’s voice, only moments before cheerful, had taken on a slightly bitter quality. “I am somewhat bitter,” she confessed. “Not that it’s stifling me, but I’m bitter because I lost a lot of money which I will never get back. I don’t sit there everyday and mope about it, “she cautioned, “nor do I say I’m going to get him.”

Of the three years of frustration, Louise, quiet and reserved, whispered the understatement of the evening: “It makes you very unhappy.” Billy, however, was a bit more descriptive. “You can get stir crazy sitting in your apartment.”

Many artists have had to learn the hard way that if they don’t go on the road, they can’t make money. The advances against royalties they get from the record company will only last as long as there is a product. And they are just what the word says: advances—not gifts, stipends or salaries.

Many people believe that the sharp downturn for Odyssey caused Tony Reynolds to leave the group. “I don’t know,” Lillian snapped somewhat annoyed when I asked what had happened to Tony. “He had a family to take care of…and if the artist doesn’t work…Tony had a house in Queens, and we lived in apartments,” she offered as the last word on the subject.

As for the two sisters, they sat the dry spell out watching a little television,  according to Lillian. Vacations, forget about that.

Lillian pointed out that for singers, it’s not a simple thing to say, hey, let’s go on a tour. “When you have a big record,” she explained,” people want to see a big extravaganza. So you have to go out there with 50 pieces. You can’t go out there with four or five and duplicate that sound. The sound that is heard on the album,” she went on, “is doubled in the studio for richness and volume. You have to go back to the drawing board after you come out of the studio and have charts condensed to maybe seven pieces from more than 20 pieces.” Odyssey, riding in the crest of Native New Yorker, were more than willing to take the time and expense, but, as Lillian put it, “who do you argue with when your producer is your manager?”

Odyssey recently changed management again and are optimistic that the latest switch, away from manager Mort Berger, will prove to be productive. At least it looks like it may click. They are rehearsing, the charts have been written, the choreography completed and costumes chosen.

Traveling with the group will be a marvelously talented 22-year-old keyboard player, who is Lillian’s oldest son. Fifteen years ago, it would have been unheard of for a female singer of popular music to be married, never mind have a son the same age as most of her fans.

“I am very proud of the fact that I have three sons,” Lillian declared. “I was told not to say anything. We were told, don’t mention your children.”

Lillian felt that if they can’t accept that, I’m very sorry. She admitted that for a while, she did heed the advice not to tell the world about her children. “Maybe it does hurt record sales if somebody can’t look at you and say, Gee, I’d like to go out with this chick. But I don’t have to do that. I might get hell for saying it to you now,” she confided, “but I don’t like to lie about it.”

Her sister Louise wished, “to the kind of audience we would like, it shouldn’t matter. It wouldn’t matter to me. As long as they please me, I’m fine. I’m his aunt,” she boasted. “I’m not his mother, but I’m in the same age category. Louise said that buying an album should be like going to a butcher. I want good meat from my butcher. I don’t care how many kids he has. So we have a product, come and buy it.”

“If you want to watch your Bubble Gum girls, your 19-year-olds,” fine, Louise persisted, adding that she has no intentions of getting up there and trying to dress young and look young. “I don’t act or dress like a young girl. I leave that to the young girls — I dress maturely to keep my old bones warm,” she added, flashing a smile that could keep the entire city of Baltimore at a comfortable 70 degrees any winter.

The confidence of the two Lopez sisters dates back at least 20 years. According to Louise, the young ladies had an extensive repertoire. “We worked in clubs. Lillian played piano, I played percussion and Tony played bass. We were out there for about a year before the record hit, singing Broadway tunes, singing songs in different languages, popular tunes of the day, ballads, rhythm and blues — the gamut.”

The years of playing clubs, including Broady’s in New York, gained them the loyal admirers that followed them into the Upper East Side’s Ali Baba night club when Odyssey was formed. There was a deep appreciation for the kind of music Odyssey had to offer. Louise explained that the group’s choice of material had its roots in their upbringing on the East Side, where their block was not your typically segregated neighborhood, but instead, a United Nations.

“In our area, we had Puerto Ricans, Haitians, Cubans, people speaking different languages which made us aware. We grew up listening to other people’s music and languages.”

All three were quick to defend any accusations from militant circles that they have bleached their black origins. “Our music is the black experience in a very broad sense,” Louise said. “And we’d like to broaden it even more. We like music from Brazil, the West Indian islands, Africa, the South and the European influence — African music with European influence, especially.”

Listening to Louise earlier in the evening at the rehearsal studio, I understood what she meant. Louise has a soft, Miriam Makeba quality in her voice that is almost perfect for the kind of sound and music that Odyssey wants to project.

Billy, however, was not a part of the Lopez experience, and had to adapt. He admitted that at first, singing with Odyssey was basically, a job. “I saw an ad in the trades and decided to audition.”

Both Lillian and Louise liked what they heard and wanted Billy’s tenor in the group, since it was able to blend with their voices and preserve Odyssey’s philosophy of musical harmony.

Aside from the satisfaction of having three voices that blend musically, Louise says singing, for her, is an emotional outlet. “Now, for the first time in a long time, we feel very good. Our spirits are up. We are working.”

Lillian agreed wholeheartedly: ‘”These is a communion between us that enables the whole thing to jell. The time has come.”

All three are equally happy with the results of their third album effort Hanging Together, which, according to Lillian, has a bit of everything in it from country to funk to ballads and rhythm and blues. When you hear Use It Up, it sounds like our people coming up the Nile.

All agreed that the effort was much better than their second album, Hollywood Party Tonight by the producers of Native New Yorker. “It wasn’t the type of music that was marketable,” Lillian stated flatly. “It was easy listening, jazz oriented, all very Savannah Band. It just didn’t do anything. We had no voice, which they obviously did have on their latest production. We discarded songs that we didn’t feel were right,” Lillian said. “We had songs suggested that sounded like the Village People and we discarded them.”

Having rid themselves of all that was apparently detrimental to their careers Lillian, Louise and Billy are as optimistic as the student who knows he’ll get an A on the test and who had failed the past tests only because the teacher planned it that way.

Their long nights of rehearsals in Baltimore are living testimony at least to their willpower. We talked about it until 4:30 in the morning, so these folks must be for real. Drained by the journey and the late hour, yet fascinated by the positive vibrations of these go-getters, I found my way back to the airport for the flight home. I was glad it wasn’t that Beechcraft again.