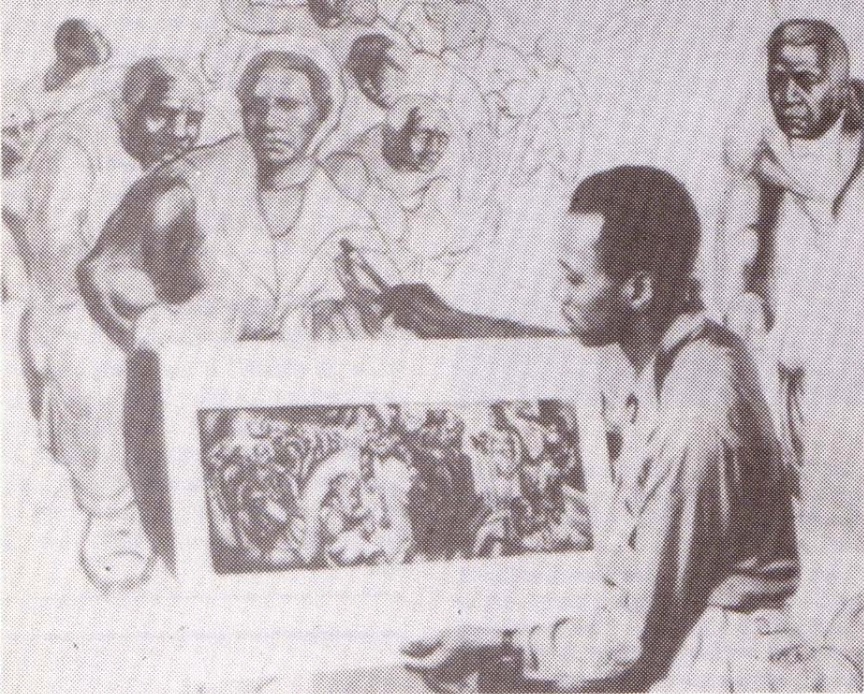 Dignity is the word most often ascribed to the paintings Charles White. He speaks so gently and serenely of the hope, the passion, the tears, and the desperation of a noble, proud, and spirited people. His majestic interpretations of childhood, love, the strength of women, and the power of men, make those who behold his work shudder and sigh a the tenderness with which he is able to depict the glorious sides of life, despite its sometime harsh and cruel blows.

Charles White was born April 2, 1918 to Ethel Gary and Charles White, Sr., a Creek Indian. His parents were southern migrants who settled in Chicago where White spent most of his youth.

He knew he wanted to be an artist from the time he turned seven and received a  set of oil paints from his mother. His enthusiasm proved to be a bit overwhelming when his mother discovered he had pulled off the window shades and used them as canvasses. She bought him a violin and hid his paints, but White remained persistent.

While in elementary school, he became aware of and quite sensitive to a vacuum that existed in his studies. There was no evidence of black culture in America. He asked why blacks were not included  in  the discussion  of the American Revolution and was told to sit down. For the final exam, he turned in a sheet of paper with nothing but his name on it.

His only salvation in school was art class. He was encouraged to submit his work in several competitions. He won a scholarship to the Chicago Academy of Fine Arts, but when he arrived for class, nervous and flustered officials told him there had been a mistake. The same thing happened at the Frederic Mizin Academy of Art. These events left their marks on Charles’s mind and became the motivation for his graphic poetry told in bold strokes on canvas.

At 14, White became a professional sign painter and met many other black artists in the same trade. Together, they formed an art dub, held weekly fundraising parties so that one of them could pay for a lesson a week at the Art Institute of Chicago. Whoever went to the class would come back and teach the others.

Eventually, White won a scholarship to the Art Institute. His tuition was paid for, but he had to work two jobs, including one as a cook, in order to pay for his materials. He also taught drawing to high school seniors.

While teaching at the Chicago Community Arts Center, which he helped establish, a young photographer named Gordon Parks asked to use the center for his photographs. Mutual admiration led to a close friendship and they would often go through the neighborhood streets together. Parks would photograph what White  would draw.

At 23, Charles white married sculptress Elizabeth Catlett. Shortly after the  wedding, he was granted a fellowship and the newlyweds traveled to the deep  South where Charles received many of the impressions that would have a lasting  influence on his work. He was moved by the poetry of the people, their lifestyle  and their music. He often captured the feelings of dance in his work.

As a young artist, Charles White became known for painting murals, most of  them with an historical flavor. While in the South, he made the sketches for a mural dedicated to the role that black people played in building the foundations  of the United States. The 80 x 60 foot mural now hangs at Hampton Institute in  Virginia. It received a great deal of national publicity and acclaim. The critics  called it “a vigorous expression of protest against anti-democratic forces.” It  included Crispus Attucks, the first American to die in the Boston massacre; Peter  Salem, who killed Major Pitcairn at Bunker Hill; slave insurrectionists Nat Turner and Denmark Vesey; Booker T. Washington, George Washington Carver,  Max Yergen, and Paul Robeson.

When he was drafted into the army, Charles spent most of his time as an artist in the camouflage division. After he was called to fight the raging waters of the flooded Mississippi and Ohio Rivers, he developed pleurisy and tuberculosis. He lay in a hospital for three years.

During the period that followed, Charles White spent a year as artist-in-residence at Howard University, experienced more ill health and the disintegration of his marriage. He moved to New York where he lived in the 400
block of Edgecomb Avenue in Sugar Hill. Among his neighbors and friends were Robeson, Langston Hughes, Dr. W. E. B.  DuBois, Ralph Bunche, Thurgood Marshall, and Duke Ellington. The interactions with these prominent leaders also influenced his work, as black heroes became the subject and stimulation for his  portraits.

White remarried in 1950 and on his honeymoon in Europe, he was astonished to find that his drawings were all over the continent. He received invitations to speak in the Soviet Union, Czechoslovakia, and Poland, while museums in Alabama and Louisiana would not even allow his works to be shown.

He was most comfortable drawing in black and white—oils presented a special challenge to him, but he never believed color was necessary. Many of his portfolios are now collector’s items. Charles White won 39 American and European awards. His drawings are exhibited in 49 museums. He has been recognized as one of the few masters of draftsmanship, along with Picasso, Salvador Dali, and Rico Lebrun.

Up until the time of his death, on Oct. 3, 1979, Charles White was living in
California and worked as professor and chairperson of the drawing department of the Otis Art Institute at Los Angeles. There was no funeral. Instead, his friends celebrated his life with a Memorial Jubilee filled with art, laughter, and dancing at the Kinsey Auditorium of Los Angeles’s Museum of Science and Industry. Sidney Poitier, Donald Byrd, Beah Richards, Ivan Dion, Paula Kelly, Roscoe Lee Brown, and Brock Peters were among the many celebrants. Historian Lerone Bennett, author of “The Shaping of America,” which featured Charles White’s drawings,  said, “We rejoice, we are glad in our hearts, because Charlie was here, and is here and will always be here…and because the incredible beauty of his
hereness illuminated and enriched our lives and transformed the vision of millions of men and women who once were blind and now can see.”

“…My work takes shape around images and ideas that are centered within the vortex of a black life experience—resulting in contradictory emotions,    anguish/hope, love/despair, faith/lack of faith. Stubbornly holding on to the elusive belief that the people of this land cannot always be insensitive to the
dictates of justice or deaf to the voice of humanity. ”

‘‘…I didn’t say to myself, ‘I want to be an artist!’ It was a natural action for me to take. It had nothing to do with a career. That was a luxury  which circumstances created. It didn’t matter to me whether I could make a  living at it or not. I eat, I make love, I paint…That’s who I am.”

“…I always assumed I would do menial jobs all my life. It never occurred to me that some day, someone would be foolish enough to pay huge sums of money for my work. ”

‘‘…This raises, in my mind, the whole treatment of women in our society. If you notice, there are very few male images in my work. The majority of them are female, especially those which represent qualities that are good, real and substantial.”

“I feel that enough of life has rubbed off on me that I want to make a statement of who and where I’m at. My philosophy doesn’t exclude any nation or race of people. I have a special concern however, for my own people—their history, their culture, their struggle to survive in this, a racist country.”