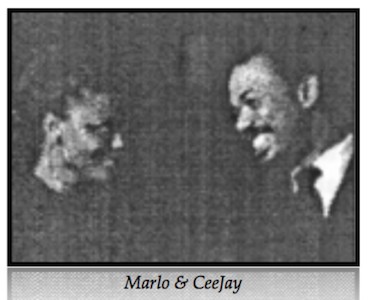 When director Tunde Samuel stood before the audience and declared: “This is not a play written just to entertain, but to get you involved,” he invoked expectations that were thoroughly satisfied by Looking For Love, a stirring musical now at Riverside Church’s, Cloister Theater, 91 Claremont at 120th Street.

Written by C. Cesar Jackson, this autobiographical work is indeed participatory theater. It piques your interest with the topical theme of Child Abuse, then draws you into the drama with engaging action that takes place on stage, off stage, in front of the first row and in the aisles. Don’t be fooled by the rousing tunes and sprinkling of humor. This is a soul searching production with a powerful message conveyed by superb acting.

The drama unfolds on a skeletonized stage. The mood of the play revolves around three people: Marlo (Tina Robinson), deeply scared by the sexual abuse of her father; Ceejay (Gary Giles), whose insecure father continually demeaned him for wanting an education. Ceejay says dejectedly “Because he was scared I’d be a better man than he was”; and then there’s Joe (Maurice Puryear) who was physically abused by his alcoholic father. He seethes with rage which he vomits, as verbal abuse, on Lisa (Lisa Stewart), his wife.

These are wretched, vulnerable creatures trying to make a life for themselves despite their unforgettable wounding experiences. The experiences defy suppression. They eat at their insides, threatening their love relationships or preventing them from materializing.

Eventually, through psychotherapy and religion, Marlo, Ceejay and Joe begin to exorcise their pain and anger and embark on a road to health and love which, according to Jackson, “Everyone is seeking”. But for him, the search, he believes must begin inside oneself-beneath the pain and anger where, like a thirsty bud, love lies waiting to be sprinkled with the dew of forgiveness. There it could bloom and attract unto itself its own.

The principal actors give stellar performances. Tina Robinson is thoroughly convincing as the arrogant, flippant, yet hurting Marlo. To see her slumped against Ceejay’s mother’s knee while sobbing and recalling her abuse “He was always putting his hands all over me”. This scene would draw pity from a stone. Giles, comfortable in his role, gives an outstanding portrayal of a young man tortured by fears of becoming like his father because of desire for Marlo. Other parts are well played by Puryear and Stewart as supporting actors and Terri Jones-Small as Rev. Marshall.

Filled with gospel-style singing, the show has two remarkable numbers—during the Finale, the entire cast leaves the stage to shake hands with the audience; and the title song Looking For Love, a slow, mournful ballad that Rebecca Lewis sings with soulful control. She caresses the notes and phrases and softens the edges of the screeches.

Jackson has done a good job of transferring this tale of hope and anguish to the stage—but it has a few holes. One is the vagueness of the relationship between Lisa and Ceejay. They were sweethearts during their adolescence. Though they swear to Joe and Marlo that the affair is over, Lisa’s behavior suggests the contrary. The subject of their relationship is left hanging and the viewer wondering.

Speaking of hanging, this also happens during the on stage sermons preached by Rev. Marshall. She addresses her sermons looking to the audience. These detractions, however, do not jeopardize the quality of the play, which enjoys good direction. Samuel, who is currently involved with two other plays, does some memorable staging that totally envelops the audience. For example, he puts the scene where Ceejay attempts to rape Marlo right in the center aisle-it had a most profound effect. It took all of my strength to keep from leaving my seat and hitting Ceejay on his head. Looking for Love’s engagement at the Cloister Theatre ends August 11, but its impact, for sure, will last much longer.