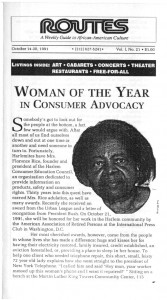 Somebody’s got to look out for the people at the bottom, a fact, few would argue with. After all, most of us find ourselves down and out at one time or another and need someone to turn to. Fortunately, Harlemites have Mrs. Florence Rice, Founder and President of the Harlem Consumer Education Council, an organization dedicated to providing information on Product Safety and Consumer Rights. Thirty years into this quest has earned Mrs. Rice praises from the Harlem community, as well as citations from notables, such as the Urban League and a Letter of Recognition from President Herbert W. Bush. On October 21, 1991, Mrs. Rice Mrs. Florence Rice will be honored for her work in the Harlem Photo by Ted Whiting community by the American Association of Retired Persons at the International Press Club in Washington, DC.

Mrs. Rice’s most cherished Awards have come, however, from the numerous people in whose lives she has made a difference: hugs and kisses for her for having their electricity restored, obtaining family insurance, establishing credit, having an Eviction forestalled, or for making available a place to sleep in Per house! In helping one client, who needed to have their telephone repaired, this short, small and feisty 72-year-old explains how she went straight to the president of the New worker messed up this woman’s phone and I want it repaired!’ ” Sitting on a bench at the Martin Luther King Towers Community Center, 115th Street and Fifth Ave, as a council seminar is about to end, she continues talking about the people she serves.

“All kinds of people benefit from my services, like that white businessman from Georgia. I kept his business going. I helped him solve his problems with Con Edison. It’s about people. That’s what makes America beautiful, it’s mosaic of people. So, if anyone calls me, they got my services.”

The Council, a non-profit organization, receives no government funds. “Then they can’t tell us what to do,” says Mrs. Rice, who has her own style of attacking problems. However, proceeds from annual fund raisers fails to cover expenses. A few have helped, such as Percy Sutton who contributes regularly, and Orphelia DeVore, founder of the DeVore School of Charm. What greatly disturbs Mrs. Rice is the lack of support coming from community and national organizations and community leaders. And, Mrs. Rice, says, “The non-sharing of information by African-Americans. We got all these isms that divide us into so many groups. It’s as if we are trying to isolate ourselves from each other. But we’ve got to share information and learn to talk to each other. If we don’t, we’re going to be in trouble.”

But despite everything else, she goes on with her work—selflessly. Why? “Because I love it,” she explains with a smile, adding “I’ve always been this way. Nothing has changed this quality. Not being reared in five foster homes; not being sexually molested at 9 years old; not being homeless; not the deceitful social worker who duped me into placing my baby daughter in foster care.” It took three years for her to get her daughter back. “Not even the International Ladies Garment Workers Union,” she says, “who, in 1960, blackballed me for speaking out against them during the Adam Clayton Powell, Jr.’s Hearings on Racism.” These obstacles have made this single parent, who never finished high school, resolute in her goal to help the disadvantaged. She continues, “I wanted to work with the people at the bottom and to provide them with a consumer education about their rights. They in turn would teach their children and this would bring up a new educated class of people from the bottom. You know, elevate a whole race of people.”

So, in 1967, Mrs. Rice founded the Harlem Consumer Education Council and, subsequent chapters in Beaufort and Columbia, South Carolina. The organization has done some wonderful things. Recently, it conducted the first Baby Safety Shower in Harlem. The 1991-92 Agenda is packed with seminars on a variety of topics, including Understanding the Credit Maze. On November 9, a program on drugs, inspired by Mrs. Rice, will be televised in 100 cities, including New York. On November 17, the Annual Fund Raiser will be held at Papa Charles on 125th Street. Mrs. Rice’s ultimate goal, however, is to establish a consumer education institute. When asked what enabled her to rise from miserable beginnings and overcoming daunting odds to becoming a leader in consumer advocacy, she replies: First of all, I never wanted to be like my mother. She put me in foster homes and never came to see me. Since I’ve never had a family, I created one. My daughter, Joyce, gave me my first base of love, affection and sharing. She’s married a great guy. From this base, I have been able to be strong.

In closing, Mrs. Rice offered the following advice, “If you fall, get up and keep going. Don’t expect to be a winner all the time. Put your trust in a higher power. Have a moral conscience—never do anything at night that you wouldn’t want seen in the day”

See the complete issue of Routes, A Guide to Black Entertainment October 14, 1991 as PDF.