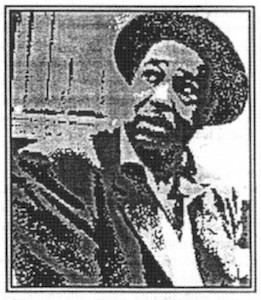 In 1923, on the promise of a job, the Washingtonians, a small band of musicians with a penchant for syncopated music, left the nation’s capitol for New York. The decade was just beginning to roar, jazz was a relatively new musical form, and the Washingtonians more often than not found themselves playing “sweet ” music, to please less venturesome ears. Edward Kennedy Ellington, whose flashy clothes and suave mannerisms earned him the nickname “Duke”, found society jobs for the this and other bands by advertising himself prominently in the D.C. yellow pages, but New York was clearly becoming the Mecca for musicians of the jazz persuasion. Still-having previously found himself stranded, penniless-in the Big Apple, Ellington decided to forego this trip, so leadership of the Washingtonians fell to banjoist Elmer Snowden, who doubled as the group’s business manager.

“Things got real tough when the job fell through,” Snowden recalled forty years later, “and we were about to give up when Bricktop rescued us.” Then known as Ada Smith, Bricktop—later to gain international fame as the hostess of chic European cabarets used her considerable networking skills to land Elmer Snowden’s Washingtonians a job at Darren’s Exclusive Club on West 135th Street. It was an enormously popular club, so Ellington needed little persuasion to join his friends there. As things turned out, that may have been his most important career move.

After three fairly uneventful months a t Darren’s, the band-still under Snowden’s leadership-took up residency at the Hollywood Club, on West 49th Street. It was there that things started to fall into place. When a musician suggested to the club’s management that it was time for the band to get a raise, he was told that several raises had already been given. Indeed they had, but Elmer Snowden had kept that bit of information-not to mention, money-to himself. After ousting him, the band’s remaining members elected Duke as their leader, and that is how the famous Duke Ellington Orchestra started. Other members were soon added, but the original band of Washingtonians stayed with Duke for many years. Drummer Sonny Greer, who first played with Ellington in 1920, didn’t leave the band until 1951. No other bandleader could boast such continuity, and that is one reason why the Ellington sound was so distinct Duke played piano, but his main instrument was the orchestra, and just as Bach, Beethoven or Vivaldi wrote concertos for specific instruments, so Ellington composed his music with individual musicians and their styles in mind. Men like Bubber Miley, Johnny Hodges, Cootie Williams, Barney Bigard, Ray Nance, Joe Nanton were as much a part of the Ellington sound as Duke himself. Anyone can play an Ellington tune-and most musicians do-but only the Ellington Orchestra, with its distinguished soloists, could convey the true sound of America’s most famous composer.

Fortunately, Duke left us a rich legacy of recordings; hundreds of hours are available in record stores and libraries throughout the world, and there is even more to come as collectors dig out and dust off stored away acetate discs and tapes. Ellington was nowhere as highly regarded as in Europe, where one of the world’s largest collections of Ellington music was amassed by King George VI of England (now, presumably, gracing Queen Elizabeth’s record shelves), nor that Ellington’s personal library of records and tapes—including many un-issued performances—is, at his estate’s request, housed in Denmark, where the government oversees it.

When Duke Ellington first came to Harlem, he fell in love with it. “It’s like Arabian Nights,” he exclaimed as he took in its bright lights and inhaled the energy of its people. The rest, as they say, is history, for Duke Ellington’s music came to symbolize Harlem during its most dynamic period.

See the original layout of Routes, A Guide to Black Entertainment November 4, 1991 as pdf.