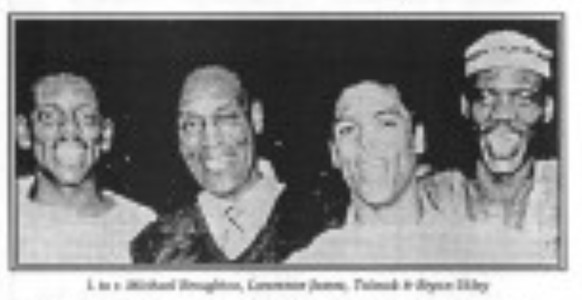 The Third Rhythm, written by Chuck Butler, diligently  examines a crisis that shakes the foundation of a middle class family and forces it to look at a delicate subject that brings about turmoil and violence. Performed at the National Black Theater, 2033 Fifth Avenue in Harlem, where it enjoyed a three week run before closing on November 17, this frank and enlightening play is expected to reopen in the near future.

Mr. Butler, a poet turn playwright, introduces us to a loving family of a father and two sons who suddenly find themselves estranged when circumstances reveal that the younger son, T. J. (Taimak) is homosexual and in love with his brother’s best friend. Shocked and bewildered, the father (Lawrence James) reproaches himself with the predictable question “Where did I go wrong?” After deciding not to blame himself, he insists that T.J. seek psychotherapy — T.J. flatly refuses.

His brother, Jeff (Scot Anthony Robinson) suffers a broader range of emotions—shock, hurt, betrayal and anger, especially at Rashan (Byron Utley) for not only corrupting his brother, so he thinks, but also for threatening his concept of manhood. After all, Rashan, always dashiki-clad, was one of the boys, and, as such, active in the frequent bull sessions that focus on women and sexual conquests. His revealed persona, however, conjures up fear in Jeff. This fear builds to rage and compels him to commit a violent act against T. J. This act of desperation is the high point of the play and the catalyst for the changes in attitudes that ease the family crisis. Mr. Butler attempts to say many things with his first play. One is a statement about the way homosexual men see themselves, that is to say, as men. Another is the concept of manhood, which, for him, is not a matter of sexual conquests, but rather honesty, sensitivity, sincerity, intelligence and fidelity—all the qualities T. J. possesses. T.J.’s antithesis is Rashan, a bisexual man, therefore a confused man. For Mr. Butler, sexuality has no middle ground; one must be either homosexual or heterosexual. T.J.’s counterpart, however, is Barry (Michael Broughton), heterosexual friend, who is serious about his integrity and secure in his manhood. Hence, the reason for his ease in telling T.J. “Muscles and a deep voice just don’t get it for me, but I support you”. Most of all, Mr. Butler is saying you should “get to know your brother,” for you may be his keeper. This is intimated by T.J. while discussing homosexuality with Barry, “Man is made for woman, I’ll give you that,” he says, adding “and that’s the first rhythm. The second is that woman is made for man. The third rhythm is a lot closer than you think.”

Directed by Dwight R.B. Cook, the two-act play moves at a fast pace and each scene ends on a dramatic note. Some scenes reach high levels of passion, such as the one in which Barry and Rashan bitterly confront each other over the importance of sincerity, truth and fidelity to a relationship. Mr. Cook sets this scene right in the area between the stage and the front row where the audience is able to feel its full impact.

There’s comedy as well, a necessary ingredient in this type of play, and Michael Broughton keeps the audience laughing with grimaces, gestures and funny lines. One of the funniest scenes occurs in the hospital room where TJ. is recuperating from the result of his brother’s violence. In talking about the beauty of women Barry passionately describes the female anatomy in graphic detail. Then he looks under T.J.’s blanket. Bewildered, he drops it immediately and says Nuthin!

Scot Anthony Robinson also deserves special mention for a powerful portrayal of a desperate young man struggling with a crumbling foundation of beliefs. And Byron Utley, convincing as a defensive, confused man. T.J.’s character, however, could have been more developed, so that we learn what he means when he says that his sexuality is not easy for him. Despite this flaw, the play is ably acted by all five actors, on a stage that Robert Joel Schwartz has designed to resemble a comfortable living room and bedroom. The Third Rhythm is truly provocative and, therefore, worth seeing.

See the complete issue of Routes, A Guide to Black Entertainment November 25, 1991 as PDF.