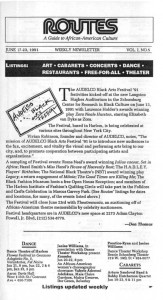 The Festival, based in Harlem, is being celebrated at various sites throughout New York City.

Vivian Robinson, founder and director of AUDELCO notes, “The mission of AUDELCO Black Arts Festival ‘91 is to introduce audiences to the fun, excitement, and vitality the visual new and performing arts bring to our city, and, to promote cooperation between participating artists and organizations.”

A sampling of Festival events: Rome Neal’s award winning Julius Caesar, Set in Africa; Hazel Smith’s Miss Hazel’s House of Heavenly Rest; The H.A.D.LE.Y. Players’ Birthrites; The National Black Theatre’s (NBT) award winning play The Legacy, a return engagement of Mitote;The Good Times are Killing Me; The Black Fashion Museum hosts a free Open House Reception; and members of The Harlem Institute of Fashion’s Quilting Circle will take part in the Folklore and Crafts Celebration in Marcus Garvey Park. (See Routes’ listings for dates and locations, for many, of the events.)

The Festival will close June 23rd with Theatremania, an auctioning off of African-American theatre memorabilia by celebrity auctioneers. Festival headquarters are in AUDELCO’s new space at 2273 Adam Clayton Powell, Jr. Blvd, (212) 534-8776.

See  the complete issue of Routes, A Guide to Black Entertainment June-17-23-1991 as PDF