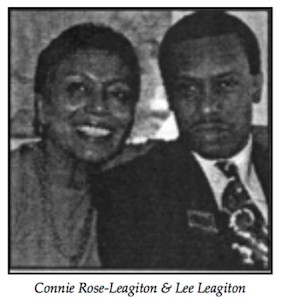 Lee Leagiton, president of L. Cee Enterprises and his wife and vice-president, Connie Rose-Leagiton, have certainly not advanced upon an appendage with their new game: Paraphrase…put another way. They have rather struck the spike on the noggin. Paraphrase  is a unique and exciting word game that challenges players to recognize cleverly reworded phrases, clichés and other idiomatic expressions. (Read below to see how well you recognized the two “paraphrases” in the preceding paragraph.)

According to Connie and Lee, the seeds from which Paraphrase  sprung were planted during a “long and boring, seven hour drive from New Jersey to Virginia. It was spontaneous and fun, just something to break the monotony.” But long after the Leagiton’s returned home, they found themselves still playing this game they’d made up on the road, “It was almost obsessive. We played it all the time. When we were alone, when we had friends over.” One night while relaxing in bed, it struck them: maybe what they had come up with was a valid, viable and marketable game idea. Why wouldn’t others have as much fun with their paraphrase game as they and their friends were having? Months of research and plain, hard work followed. Finally, about a year ago, after several versions and refinements Paraphrase put another way was born.

Paraphrase  is much more than parlor fun. And the Leagitons, quick to recognize the game’s inherent value as an educational and language arts tool, have included the educational community in their marketing efforts. As a result, Paraphrase  has already stirred interest among secondary and college level educators; and fraternal and sororal organizations.

See the complete issue of Routes, A Guide to Black Entertainment July 1, 1991 as PDF.