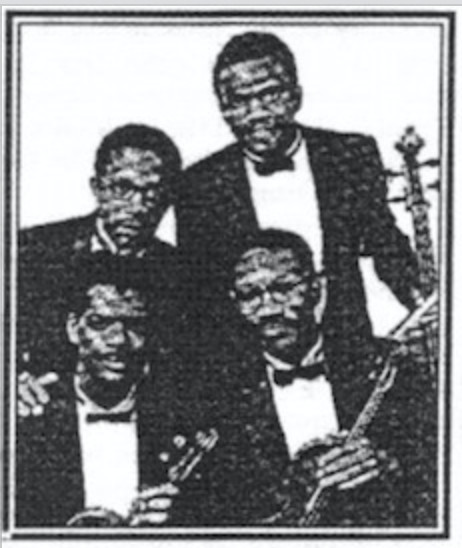 If you’re a classical music lover and the recession has kept you away from Lincoln Center, then head on down to Grand Central Station, where the music of great classical composers floats melodiously, free of charge, over the din of rushing commuters.

Many stop dead in their tracks when they realize the West Village Quartet is the origin of the Mozart, Beethoven, Bach or Haydn composition. Some view these four young men curiously. Others look delighted. One man with his eyes closed and wearing a faint smile waves his forefinger back and forth to passages of Haydn’s Concerto in F Major. Perhaps he’s thankful for stumbling upon an end-of-the-day-relaxer far superior to a dry martini at Happy Hour.

But if there’s delight, there’s also puzzlement. After all, why is this talented string quartet playing in the subway?

Well, it’s not about  “brother can you spare a dime?” Each member is a professional musician, trained at some of the best schools in the United States and Great Britain. Individually, they have played with leading metropolitan orchestras and, as an ensemble, at concerts sponsored by universities, churches, historic societies and civil rights organizations. The quartet has also played the Bennett Conservatory Annual Scholarship Concert, which usually features well-known musicians.

David Burnett and Kenneth Pearson began playing together while studying at the New York High School of Music and Art and later at professional schools of music. They became the West Village Quartet five years ago, deriving their name from frequent appearances in Greenwich Village. Gaining recognition proved difficult in a city with many young quartets. So they chose an unusual route for serious classical musicians.

They auditioned for Music Under New York (MUNY), a project established by the Metropolitan Transportation Authority to schedule musicians in railway and subway stations. “We were the first string quartet to try such an approach, something untried by most classical musicians,” says David Burnett, second violin and Quartet manager.

The approach paid off. Almost immediately they were invited to perform at Gracie Mansion, the American Academy of Arts and Letters, and many churches such as the Cathedral of St. John the Divine. They have appeared on WNET’s Children’s Express and CBS’ Entertainment Tonight. They have also appeared in the PBS film Runaway, starring Jasmine Guy, leading actress in the television program A Different World. Recently, the New York City Health Commissioner invited them to play at Gracie Mansion for Mayor David Dinkins, and the British American Chamber of Commerce also invited them to perform there for the Duchess of York, better known as Princess Fergie.

Recognition was inevitable, however, when you consider the quartet members’ talent and training. London-born Carlo Baptiste, first violin, studied at the Yehudi Menuhin School and Royal Academy of Music in Great Britain. Mr. Baptiste has been a soloist with the Royal Academy Orchestra and the National Youth Orchestra in London. In New York he studied at the Mannes College of Music and performed at Carnegie Recital Hall, Alice Tully Hall, Merkin Concert Hall and on radio station WQXR.

David Burnett, second violin, was born in Harlem. After graduating from the New York High School of Music and Art, he studied at the Oberlin Conservatory in Ohio and the Boston Conservatory. Mr. Burnett played with the New York Philharmonic Orchestra, the New York Youth Symphony and the Ohio Ashland Symphony.

Kenneth Edwards, violinist, also born in Harlem and graduated from the New York High School of Music and Art. He received a Bachelor of Music degree from the Juilliard School and a master’s degree from North Carolina School of the Arts. Mr. Edwards is principal violist in the Bloomingdale Chamber Orchestra, the Bronx Chamber Orchestra and the Liederkranz Opera Orchestra.

Manhattan-born Kenneth Pearson, cellist, graduated from the New York High School of Music and Art. He studied at the Mannes School and the Philadelphia College of Performing Arts and recently graduated from Temple University School of Music. Mr. Pearson has played in the Metropolitan Philharmonic and the All-City Orchestra.

Besides European composers, the Quartet enjoys playing the works of composers of African descent. “A lot of people don’t know that there were black composer,” says Burnett. “For example,” he continues, “Chevalier de St. Georges, born in Guadeloupe, West Indies, lived during the 18th Century.” Burnett further explains that African descendants played classical music during slavery. Slaves who were physically unfit to work in the field were sent to Vienna or other European cities to learn music. Joseph White, born in Cuba in 1839, was one of them. Today, there are several African American composers including George Walker, David Baker, Noel DaCosta, Kermit Moore and Dorothy Rudd Moore.

One of the Quartet’s goals is to bring classical music to African-Americans, especially elementary school children. “Blacks are always associated with Rhythm and Blues, Gospel, and Rap,” says Burnett, adding “I love R & B and Gospel, but I don’t think we should be limited to them.” The Quartet also strives to introduce other African American classical musicians to the public. Two guest pianists, Vincent Craig and Anthony Newton, will appear with them on February 29th, when they will perform Frederick Jacobi’s First Quartet based on Indian Themes and Franz Schubert’s Quartet #14 in D Minor at the New York Society for Ethical Culture, 2 West 64th Street in Manhattan; (212) 874-5210.

The Quartet plays once a week between Wednesday and Friday in Grand Central Station in the Gray Bar building area and in front of Chemical Bank; in Penn Station in the ticket area of the Long Island Railroad and at Tracks 21 and 22.

See the complete issue of Routes, A Guide to Black Entertainment January 20, 1992 as PDF.