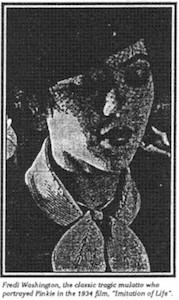 I have the soundest of reasons for being proud of my people. … Ours is the truest dignity of man, the dignity of the undefeated.
Ethel Waters, His Eye is on the Sparrow

They were all photographed by Carl Van Vechten between 1932 and 1962. Some people say that Van Vechten, critic, essayist, poet, photographer, and millionaire novelist, was a dilettante. Others say he was a Renaissance man. Whatever label applies, his contribution as catalyst and chronicler is Fredi Washington, the classic tragic mulatto who undeniable, portrayed Pinkie in the 1934 film, Imitation of Life.

In the 1920s, Van Vechten championed African-American artists, writers, and performers in several publications including Vanity Fair and the New York Times. He was a one-man public relations firm, opening doors and facilitating mainstream notice and support. With amazing energy, he alternated between the enclaves of wealth and power in America and Europe. But wherever he went, he always came back to Harlem.

In 1932, six years after publishing his controversial novel, Nigger Heaven, Van Vechten turned to portrait photography, an avocation which consumed him the rest of his life. Fifty of his portraits are on display at the Manhattan East Gallery, 202 E. 76 Street. The gallery director, Julia Hotton, has extended the show, O Write My Name: Harlem Heroes, through February 1. The same exhibit, sponsored jointly by Eakins Press and the Schomburg Center for Research, can be seen through February 29 at the Harlem School of the Arts, 645 St. Nicholas Avenue. The HSA exhibit was designed with a school population in mind.

This show demonstrates that in these inflationary times, a picture can be worth a million words. Take for example the portrait of Bill “Bojangles” Robinson. Gone is the kindly dancing, dark grandfather wearing gloves and holding little Shirley Temple’s hand. In his place is a dignified and virile black man. This photograph suggests the thesis that a society celebrating but wary of Robinson’s sensuality forced him into a white-gloved strait-jacket. Van Vechten’s portraits capture the integrity and sometimes the tragedy of some of the forgotten, some of the unsung, and some of the remembered heroes from a pivotal period of this century’s history.

The Manhattan Gallery offers an intimate setting. It’s almost as though the people in the portraits could saunter right off the walls, sit down on the plush white sofas and converse and be quite at home in the classic ambience. Ms. Hotton has editorialized the exhibition in the way the photographs are grouped. For example, she places four of the guiding spirits of the Harlem Renaissance on a wall all by themselves. They become in a sense, the fulcrum around which the show is organized.

Charles S. Johnson, the first editor of Opportunity, the Urban League’s magazine, was later president of Fisk University. Johnson, a sociologist from the University of Chicago, preferred to wield his considerable influence quietly. Next to him, side by side in the center, the Johnson Brothers from Florida, hold court. John Rosamond, trained at the New England Conservatory, composed the music for the Negro National Anthem, Lift Every Voice and Sing, and James Weldon, a school principal, a lawyer, a novelist, an arts historian, a lyricist, a diplomat fluent in Spanish, an administrator for the NAACP, and a university professor, wrote the lyrics. Alvin Locke completes the powerful quartet. The urbane Mr. Locke, the first black Rhodes scholar, philosophy graduate from Harvard and Oxford and the University of Berlin, and professor at Howard University, was the most learned critic of the period.

James Bartow, the artistic coordinator at the Harlem School of the Arts, decided, after discussion with Ms. Hotton, to hang the exhibition alphabetically. The first portrait is of Lottie Allen, a domestic. Each portrait includes biographical information and a quote either from the person in the portrait or something representative. Lottie Allen has one of the most memorable quotes, from Walt Whitman, summing up the theme of the exhibition, dignity no matter the station in life. “. ., dismiss whatever insults your own soul, and your very flesh shall be a great poem.” Bartow sets some people apart by elevating their portraits above the level of surrounding ones, for example, W.E.B, Dubois and the concert singer, Roland Hayes.

The display at the Harlem School of the Arts ends with two novelists, Margaret Walker, author of Jubilee and Richard Wright, author of Native Son, This exhibition which begins with a day worker and ends with two intellectual giants, one male and one female, acknowledges the full spectrum of lives that must be paid attention to | when we think of the Harlem Renaissance. It was a time when immortals walked the Harlem pavements, but just as importantly it was a time when the common man and woman went to work everyday, raised their children, and fought their private battles for the betterment of the race. They, too, participated in the struggles, in the creation of an oath century legacy. Van Vechten has personalized a moment and given us precious mementos of the past, people frozen in time, frozen in their prime. The story of the Harlem Renaissance has not yet been completely told, but it can never be fully told without Carl Van Vechten, Through his art, critical genius and ubiquitous presence, Carl Van Vechten made himself indispensable.

See the complete issue of Routes, A Guide to Black Entertainment January 22, 1992 as PDF.