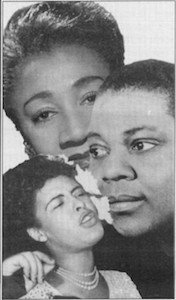 Enjoy! this archived edition of Routes, A Guide to Black Entertainment from April 13-19, 1992. See what was important and what happened in the African-American community.

If someone were to ask you to name a common denominator for Sarah Vaughan, Carmen McRae, Alberta Hunter, Ella Fitzgerald, Diana Ross, Billie Holiday, Aretha Franklin and Bessie Smith, you would probably say, “Female singer.” You would, of course, be right, but these ladies also have something else in common: their birthdays fall between March 21 and April 19 — they are Aries. This fact is a strong argument for those who believe that there is a link between one’s personal traits and astrological signs. People born under this sign are said to be hardy and aggressive. Which is precisely what a woman had to be in order to make her mark in the male-dominated music world that saw these ladies rise to the top.

Billie Holiday had about her all aura of vulnerability, which characterized her singing style and struck anyone who met her in person. I witnessed both sides of Billie; yes, she was known to subject herself to terrible abuse by the men (don’t believe a single frame of “Lady Sings the Blues”), but she was no weak sister. For example, that ball of tissue she used to keep on her dressing room table concealed a razor blade”just in case anyone acted up. In her later years, when she made her remarkable comeback, Alberta Hunter was fond of carrying shopping bags which often contained thousands of dollars in uncashed checks, but the cloth she kept rolled up in her right hand was no handkerchief”it concealed an ice pick. Alberta was also fiercely independent, and at no time did she demonstrate that better than in January of 1981, when she turned down an invitation to sing at the White House, because “they wanted me there on my day off.”

Bessie Smith owned a gun, but she preferred to settle disputes with her fists and verbal barrages. However, when people did right by her, Bessie”like Alberta and Billie”was loving and generous to a fault. She found unique and marvelous ways to deal with those who crossed her. On two occasions, when he failed to give Bessie her pay on time, Frank Schiffman”who owned the Apollo Theatre for several decades”felt her wrath. The first time it happened, she entered the theatre’s crowded lobby just before a show, threw herself on the floor, kicked her feet in the air, and screamed, “I’m the star of this show, and the motherless bastard won’t pay me!” It worked instantly. The second incident had Bessie proving her independence”financial and otherwise”by parading back and forth in front of the Apollo, dragging her very expensive ermine coat over the dirty sidewalk. An embarrassed Schiffman responded promptly.

Aries people are also said to be brash, and Bessie certainly proved that at a chic 1928 party thrown by photographer/writerCarl Van Vechten. After listening quietly as Marguerite D’Alvarez, a celebrated diva of the day, delivered an operatic aria, Bessie pushed past such guests as Fred Astaire, Langston Hughes and George Gershwin, slapped the startled opera star on the back and offered this advice: “Honey, don’t let nobody tell you can’t sing!”

Alberta was singing professionally long before microphones were invented. “I used to stroll around the room,” she recalled, “singing intimately to the people at each table. They liked that, so their tips were very generous.” As she collected the tips, Alberta tucked the bills into her cleavage. She was supposed to split the proceeds with her accompanist, but she always had a special arrangement with one of the waiters, so by the time she returned to the bandstand, at least half of the money had discretely been siphoned off.

About seventy years after she perfected this income enhancement scheme, Alberta was still tucking money into her bosom; feeling that her seven decades of hard work”including perilous wartime USA tours”had already adequately compensated the IRS, she took every opportunity to hide her real income. Thus, she demanded, and often received, cash payment for her performances. One night, in the early Eighties, the cameras were in place at the Cookery and Alberta was about to be film for a German television documentary. Just as she was ready to face her audience, the producer handed her ten thousand dollars in cash. Alberta thanked him, smiled, and matter-of-factly dropped the money into her bosom.

“Don’t worry about it, honey,” she replied, firmly patting her breast. “Nothing’s ever fallen out of here unless I wanted it to.”

This week, as we celebrate the 98th anniversary of Bessie Smith’s birth, let’s salute all the wonderful Aries women, past and present. To the ancient Romans, Aries was a battering ram; to us it is an astrological sign symbolized by the round-horned mate of the ewe. Not so strange that this should be the sign under which the likes of Bessie, Billie, Aretha, Alberta, and company were born, but (and here comes the Libra in me) let us also bear in mind that other signs have given us great performers and that some Aries performers have made it to the top without incident.

See the complete issue of Routes, A Guide to Black Entertainment April 13-19, 1992 as PDF

This issue is part of the 1990 revived Routes magazine in shorter, black and white format.