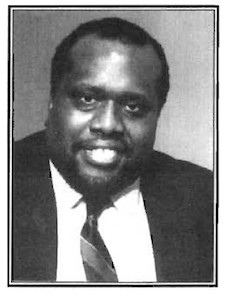 “The theatre can raise our consciousness to a whole new scope of possibilities. But only if the house isn’t empty. That’s why I decided to produce a few themes relevant to our situation,” homegrown producer Adetunde Samuel says as he leans back and crosses his arms over his chest.

Tunde Samuel knows no boundaries when it comes to getting the job done. Easily mistaken for a defensive lineman, wrestler, or bouncer, he’s a sturdy tower of a man. But the conversation of the managing producer and director of the Performing Arts Program for the National Black Theatre is delivered in hushed tones as he expresses the formidable opinions and observations of a man who lives large.

In addition to Homegrown, the Joseph Holland play that closed April 19 and is due to reopen in July, Tunde’s current theatre production credits include Song of Sheba scheduled to tour Japan in May; The Legacy slated for a Midwest tour during the ’92-93 season; Face to Face due to open in D.C. in March 1993; Third Rhythm, expected to run on Broadway this summer; and Tell Pharaoh, geared for grades 5-12 and being performed at NBT (2033 5 Ave.) Tuesdays through Thursdays at 10:30 a.m. and 12:30 p.m. and Easy Livin’, a play about the life of trumpeter Clifford Brown.

When Tunde explained that Homegrown—which explores the tribulations and triumphs experienced in a homeless shelter for men-is the third of a trilogy of plays targeting contemporary issues plaguing the African American man, J teasingly accused him of being a sexist. He laughed and his good-nature accepted the label, but with an explanation. “Women will come to the theatre. But men usually won’t come unless some woman drags them in. Art can be a powerful tool with which to teach and learn, but only if it’s experienced.

“Our young black men are losing themselves, wasting away. We have to pose questions, offer constructive comments and criticisms and reinforce the power of the family by providing portraits of the strong male role models often absent from the media and our lives.” The trilogy is considered a success. The first two plays in the series, The Third Rhythm and Easy Livin’, increased male attendance by twenty percent.

Tunde wasn’t always interested in the arts. In the late sixties, he was a psychology major at Kingsborough Community College with a penchant for understanding what and how things clicked when he met an Afro-centric couple named the Malles who exposed him to a world of new information. They talked to him about Nkrumah’s Ghana. Their awareness stirred his own and he began to think of Africa as the motherland. Then when Dr. King was assassinated, Tunde found himself crying uncontrollably, mourning the death of a noble man bravely fighting an ignoble system for simple rights, and he knew that he wanted to dedicate his own life to making a difference.

Taking every cent he had, Tunde quit college (a grand tragedy to the Samuel clan since he was the first in the family to attend college). He traveled around the country working at odd jobs Midwestto broaden his understanding and experience beyond what he’d known in a little cubbyhole called Brooklyn. After nine months, he worked his way back to the New York City, discovering the East Wind complex on 125th Street.

The complex was home to two fledgling, avant-garde art groups: the Last Poets, a fresh, new, radical, revolutionary trio of performing poets now credited with originating today’s rap and the National Black Theatre whose founder and artistic director, Barbara Ann Teer, pioneered an acting method exploring the cycles of Nigger Negro-militant-nationalist-revolutionary-evolutionary through which we struggle to become whole from our fragments.

It was in this atmosphere charged with creative expression and self-actualization that Tunde realized what is now his life’s work. This was 1969, when people believed that all things were possible. These two groups taught me that there are no limits when you are free; freedom is not a word that can be talked into being or a gift that’s given, it is the act of owning the self.

Of the two groups, NBT was the one that continued to grow; the Last Poets broke up. The East Wind complex became too small for NBT’s needs, and they moved to larger quarters on 125th Street. “I hung around and absorbed everything. I re-enrolled in Brooklyn College with a theatre major this time although I have yet to get my degree. But I got a brilliant education at NBT working every job in the theatre from stage managing to cleaning the toilets. The National Black Theatre is run on a family structure. Everyone pitches in and no job’s too low or no person too good to do the work that needs doing.”

Soul Fusion gave Tunde his first AUDELCO award of Best Performance by a Male in a Musical in 1982; his second AUDELCO (same category) came five years later for The Legacy. He was ready for bigger things. He became a producer after listening to so many of his friends complain, “Ain’t no work for black actors out here.” Being an evolutionary man, Tunde said to himself, “NBT can produce these people,” and then he did it in a big, big way. He put together large casts of more than fifteen, and they worked at NBT in a slew of award-winning productions then and now.

“The National Black Theatre is still performing on 125th Street,” Tunde said. “And we’ve acquired the entire block at Fifth Avenue where we’ve constructed a 10-million dollar complex that in addition to the soon-to-open theatre space, houses two churches [Harlem Tabernacle and the Philadelphia Baptist], a mosque [The Nation of Islam’s Mosque #7], the GADABOUT Restaurant, the Uptown Comedy Club, and a BRAVO supermarket due to open this summer. A few other commercial spaces are still available. Diversification keeps money in the community and reciprocal business helps to maintain the community’s strength. Ownership is the key.

Content to rent, many other celebrated black theaters have lost their homes and sometimes even themselves by allowing the landlord to rule their houses. They didn’t look far enough down the road to see the hard times coming. The NBT is about building an institution that will outlive our children. We have to rediscover and work the concept of family and the future in our homes, our businesses, and our lives.

“My wife, Bukanla, and my two sons, Obataiye and Oshunbunmi, keep me focussed and provide my purpose in life. Empowering them keeps our family strong, free, and owning self.”

See the complete issue of Routes, A Guide to Black Entertainment April 27, 1992 as PDF.