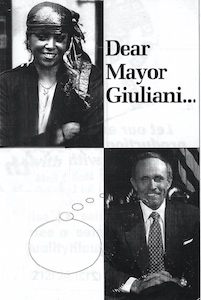 This letter is intended to bring your attention to the issues affecting community-based arts organizations, which have been part of New Y ark City’s cultural life for the past thirty years.

New York City’s community based organizations reflect the diverse artistic expressions of the myriad racial and cultural populations that make our city an international arts center. Yet the major contributions of these organizations to the city’s cultural life historically have been marginalized, underfunded and maligned. Unfortunately, this trend seems to be continuing under your administration.

Deputy Mayor John S. Dyson is on record singing the praises of the city’s “major” institutions. As reported in The New York Times (December 29, 1993,) and subsequent widely quoted, Mr. Dyson has cited the 31 “major” cultural institutions funded by the Department of Cultural Affairs as ” … the finest things in the world and that’s a source of hundreds of thousands of dollars in revenues,” while referring to the funding of the city’s 400+ other cultural organizations as “clubhouse type handouts.” Clearly, this comment reflects a lack of information, understanding and recognition of the aesthetic quality, artistic excellence, professionalism and unique benefits of community-based organizations.

Having helped create three community-based arts organizations in the past twenty-four years (El Museo del Barrio, the Association of Hispanic Arts and the Caribbean Cultural Center), I know firsthand the struggles of developing and maintaining cultural arts organizations in a climate that supports large, elite institutions with primarily European and European American aesthetic focuses.

As a member of your Advisory Committee on the Arts, Culture & Entertainment, I am aware of the thrust to validate the existence of the arts based on the tourist dollars they contribute to New York City’s economy. However, I’d like to point out that the committee had no economic information on how community based cultural organizations have helped stabilize the varied communities that are integral to New York City and which make the city an international center.

For fairness’ sake, I’d like to present another perspective of New York City’s cultural scene. I hope this letter gives you insight into the community-based arts movements that is such a vitally: important-but often unacknowledged and underfunded component of the city’s cultural scene. Most: important, you should recognize that the New York City arts scene is much larger than the 31 organizations that currently receive 85% of the city’s cultural arts funding. To fully understand the community-based arts movement that propels most of the city’s arts institutions, the following concepts must be understood and incorporated into the cultural policies of the city.

1. Tax dollars must be equitably distributed. New York City has provided 31 organizations with a disproportionate share of the tax dollars slated for arts funding. Only 15% of arts finding goes to more than 400 organizations that produce quality arts programming which truly reflects the vibrant spectrum of histories, cultures and creative expressions of the many world cultures comprising New York City.

2. Arts expressions and cultural arts expertise must be equitably celebrated and supported. For too long, New Y ark City has supported European American arts organizations, to the exclusion of Native, Asian, Latin, Caribbean and African American art forms and institutions. Yet in the past thirty years, the cultural fabric of the city — and the nation as a whole – has changed. European Americans no longer comprise majority populations of New York City and many other major U.S. cities. Many community-based arts organizations were founded in the past thirty years to meet the cultural needs and to reflect the cultural expressions of the city’s diverse populations -long before “multiculturalism” became such a “hot” interest among “mainstream” institutions. Yet in spite of their pioneering work and quality programming, community-based arts institutions remain largely unacknowledged and underfunded. Now that multiculturalism and reaching diverse audiences are desired objectives, these pioneering community-based institutions are still at a disadvantage, as more and more “majority” institutions with no history and expertise in serving diverse populations jump on the “multicultural bandwagon. ” Here’s the new twist on this situation: many of these large institutions are receiving monies to reproduce the programming and reach the same audiences that for years community-based institutions have provided for and served. Why do community-grounded institutions continue to be ignored, instead of supported and encouraged? What criteria are used to determine the value of the city’s cultural institutions? What kind of funding process determines the amount of monies that each group receives? Who oversees the process?

3. New York City’s arts policies must reflect the city’s cultural diversity. This city’s arts policies have been driven primarily by the clout and heavy lobbying efforts of elite institutions and their representatives, who have had and continue to have easy access to elected officials, foundations and corporations. Deputy Mayor Dyson’s New York Times statement (as well as his television interview with Gabe Pressman on Channel4) continues to add fuel to the fire of inequity that adversely affects the city’s smaller institutions. Mr. Dyson remarked that “the administration might channel more funds to the more renowned institutions that attract tourist revenues.” How are such decisions being made without also assessing the impact of the city’s other institutions? Why is there no analysis of the rationale of the 85% vs. 15% funding split that exists and that Mr. Dyson seems ready to continue.

4. Existing arts funding must be re-distributed. While I understand the difficult decisions you must make to balance the budget, it is important that considerable attention be given to how the city’s limited cultural arts funding is divided. The preferential treatment that 31 institutions have received based on assumed criteria of cultural excellence should be reviewed. The rescue of the New York Historical Society last year by New York City and New York State was a clear example of the preferred treatment that large organizations with a European American focus receive. The Historical Society, in spite of years of outrageous fiscal mismanagement and functioning as a “private club,” received a bailout of $12.6 million. Why are such institutions treated differently? Why are they receiving “clubhouse-type handouts”? Who decides how much funding they should receive? Why are the needs and concerns of more than 400 cultural institutions addressed in an offhanded, derogatory and belittling manner?

5. A study of the financial, job and community development impact of community-based organizations must be undertaken. “The Arts as an Industry: Their Economic Importance to the New York-New Jersey Metropolitan Region,” a recently-published report on arts and tourism did not include statistics on community-based institutions. Indeed, no survey of such institutions was undertaken. (Mr. Randy Borscheidt admitted the exclusion of our organizations at the first meeting of the Mayor’s Advisory Committee on the Arts, Culture & Entertainment.) The report is skewed to favor large arts organizations. Clearly, the findings of the report must be reviewed. Community-grounded organizations like the Caribbean Cultural Center attract visitors from Africa, the Caribbean, Latin America and Europe, as well as from all parts of the United States. The Center serves the diverse groups that comprise a major segment of the city’s population. Arts organizations such as the Center stabilize communities, not only providing educational and training services unavailable from other organizations, but also providing employment to arts professionals and spurring community development by supporting our communities’ small businesses. In addition, organizations such as ours also attract tourism to our city.

6. Private sector support for the city’s smaller institutions must be generated. Community-based arts organizations receive limited private sector support. To date, initiatives developed to increase private sector support for the arts continue to exclude the active participation of our cultural leadership, as is evident in the way that the city’s arts planning is currently being developed. (The “I Love NY” campaign is another example of how initiatives that can highlight community-based arts groups have excluded community-based programs.) Exclusion and the resulting invisibility continue to restrict the growth of our institutions. Government should be equally supportive of both large and small arts institutions, since groups contributes to the cultural life of the city. However, the current focus seems to be primarily on the city’s larger institutions.

I recommend that your administration establish an initiative to highlight the unique programming and funding needs of the city’s smaller cultural arts organizations, placing them at the center of an active, long range fundraising campaign for public and private sector monies.

In short, large arts institutions whose primary focus is on European and European American cultural forms must stand alongside the classical excellence of otherworld cultures, not above. I have enclosed a copy of Voices from the Battlefront: Achieving Cultural Equity, a new book that I co-edited. Voices contains 16 essays written by internationally renowned cultural experts. In this work, they address the need to establish cultural policies and practices that are inclusive of a wide range of cultural products and cultural aesthetics. I hope that the book also helps you to see the importance of community-based institutions to the cultural vibrancy  of our great city.

Mayor Giuliani, your administration has the opportunity to recontextualize the cultural arts activities of this city, thereby leading the nation in establishing policies that acknowledge and support the wide variety of artistic treasures that are now part of this nation’s cultural fabric and which continue to make our city such a celebrated international culture capital.

I would appreciate a response from you within the next two weeks due to the urgency of the budget crisis in the arts community. And because plans are being forged without the participation of community-based institutions, I am requesting that you arrange a meeting between the arts leadership of the city’s culturally diverse communities and Deputy Mayor Dyson and Cultural Affairs Commissioner Chapin. The Caribbean Cultural Center is willing to help organize the meeting. To make informed, equitable decisions, you and your staff must have all the facts and a range of perspectives on the city’s arts scene. I look forward to hearing from you regarding this letter and my request for a meeting.

Read the publisher statement of this issue