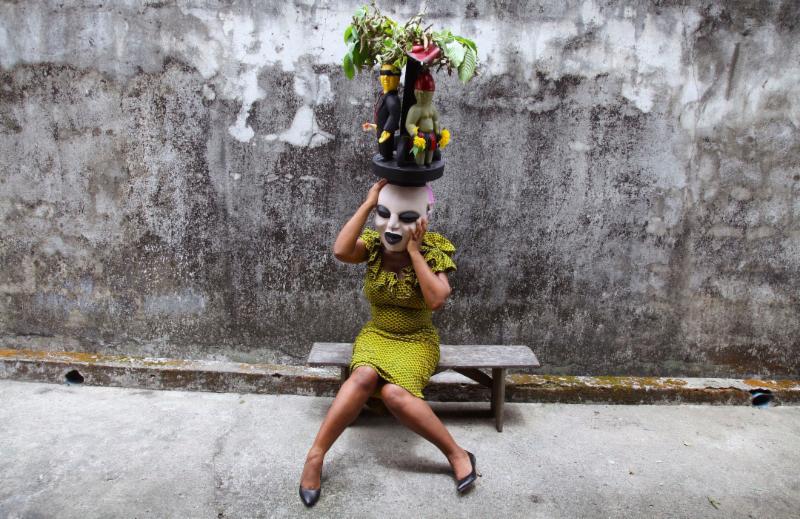 The Brooklyn Museum brings African masquerade to life with a groundbreaking installation that connects works by twenty-five contemporary artists with examples of traditional disguise in the exhibition Disguise: Masks and Global African Art.

Through play and provocation, and by engaging both African history and global contemporary politics, Disguise invites visitors to think critically about the world and their place within it, and to imagine whimsical and tangible possibilities for the future. It includes an immersive and lively installation of video, digital media, sound, and installation art, as well as photography and sculpture.

The exhibition features contemporary artists from Africa and of African descent working across the globe—including thirteen in Brooklyn and the New York area–who offer fresh visions of masquerade. Presented alongside historical masks, the contemporary works provoke, in often intentionally discomforting ways, a heightened awareness of key contemporary issues such as race, women’s agency, queerness, the exoticization and eroticization of the “other,” governmental corruption, and the limits of empathetic understanding.

Originally produced by the Seattle Art Museum, the Brooklyn Museum presentation has been reorganized to include more than twenty-five additional works culled from the Brooklyn Museum’s collection of both historical and contemporary art.
“Masquerade has long been a tool for African artists to expose hidden issues, and to challenge the status quo. However, once masks were removed from performance and transformed into museum objects, their larger critical and artistic messages became lost. Drawing from today’s media-saturated world, Disguise‘s artists fill the galleries with innovative and provocative contemporary works that remove us from our current moment and usher us into a space where closer looking and deeper perception prevail,” said Kevin Dumouchelle, Associate Curator, Arts of Africa and the Pacific Islands, Brooklyn Museum. “Disguise aims to reconnect masks and bodies in performance and to use historical objects to understand twenty-first-century art. After all, through masquerade artists can perform the past and invent the future.”
A broad and engaging range of programming will transform the gallery into a welcoming space for conversation and connection.
Ronald Bunn
Publisher
Latest posts by Ronald Bunn (see all)