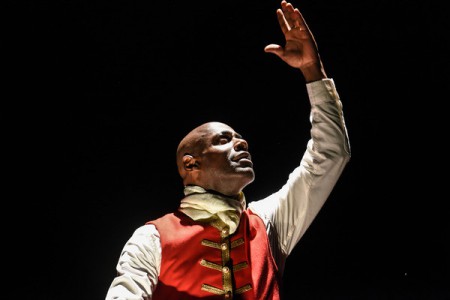 Written and performed by Paterson Joseph (Royal Shakespeare Company’s Julius Caesar, Winter/Spring 2013; HBO’s The Leftovers), Sancho: An Act of Remembrance is based on the true story of Charles Ignatius—the first man of African origin to cast a vote in Britain. Born on a slave ship in 1729 and named for the founder of the Jesuit order, Ignatius was taken in by three nuns who intended to keep him like Don Quixote’s docile servant, Sancho Panza. Ignatius, however, pursued a daring and determined life, becoming a social satirist, actor, composer, man of letters, and the subject of a portrait by renowned 18th-century painter Thomas Gainsborough. Sancho: An Act of Remembrance is a witty, and moving look at the small but vibrant African-British community in England in the 1700s. It tells the singular story of a man who achieved the distinction of being both wholly African and wholly British.

Paterson Joseph is a leading British actor seen most recently in New York as Brutus in the RSC’s Julius Caesar at BAM. He has worked regularly at the National Theatre in London (Saint Joan, Royal Hunt for the Sun, The Emperor Jones, Elmina’s Kitchen) the RSC (Julius Caesar, Don Juan, Troilus and Cressida, Love’s Labour’s Lost, King Lear) as well as the Royal Exchange, Gate, Almeida and Young Vic Theatres. His work for television includes BBC’s The Hollow Crown (PBS), The Leftovers (HBO), and Danny Boyle’s Babylon. Paterson is a season regular in Law and Order UK and Peep Show. he has also appeared in Doctor Who, Hustle, and No.1 Ladies Detective Agency (all BBC). In 2015 Paterson can be seen co-starring with Christopher Ecclestone in Safe House, a major four-part drama for ITV, as well as Apocalypse Slough, a new series for NBC/Universal.

Simon Godwin is a British theater director based in London, where he is an associate director of the Royal Court Theatre and associate artist at Bristol Old Vic. This year Godwin has directed Shaw’s Man and Superman and Farquhar’s The Beaux’ Stratagem at the National Theatre; this summer he will direct Richard II for The Globe Theater. He made his Royal Shakespeare Company debut in 2014, directing Shakespeare’s Two Gentlemen of Verona. Godwin was honored with an Evening Standard award in 2010 for direction of Nick Payne’s Wanderlust (Royal Court) and an Evening Standard/Burberry Award for Emerging Director in 2012.

Ive 5 years ago 19
Do NOT follow this link or you will be banned from the site!