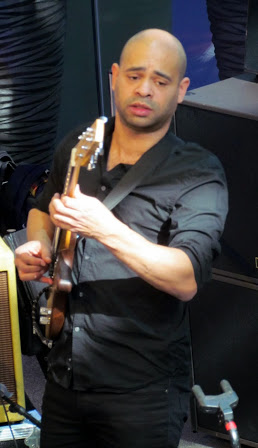 I, jokingly, refer to myself as someone who grew up on the “teat of Jazz”. As one who has spent most of his childhood and all of his adulthood on the “Jazz teat”, I guess, I could claim to know something about the Genre. Some 30 or 40 years ago, I clearly remember reading and hearing Jazz enthusiasts say “Jazz is dead”.  And so, a question comes about: What is authentic Jazz today?
Over the past two months, I’ve watched and listened to three of five “Playing My Guitar” trios at the BMW Welt Jazz Award 2015. Until listening and watching the Manu Codjia Trio, I feel that three of the invited trios, appearing under the banner of Jazz, were rock groups migrating to the Jazz Genre. Is the Jazz Genre opened to the interpretation by anyone wanting to define it?; Is there a “Jazz Police”?; Should there be consideration within the music/ entertainment industry of a new category for this kind of music, for example, “Jazzrock”? My point is perhaps the BMW Welt Jazz Award 2015 should have been publicized as the BMW Welt Jazz & Jazzrock Award 2015.
Today’s performance by the Manu Codjia Trio was clearly in the jazz idiom tradition, as I felt it. But I found me continually questioning myself: ” How do you know that?” I end up, always, referencing this feeling to having lived “childhood to adulthood” on the “teat of Jazz”.

The winner of the BMW Welt Jazz Award 2015 will be chosen through a Jury of Jazz Experts: Oliver Hochkeppel (Music and Culture Journalist for the Süddeutsche Zeitung), Andreas Kolb (Editor-in-Chief of the JazzZeitung and the neuen muzikzeitung), Roland Spiegel (Music Journalist for Jazz at the Bayerischer Rundfunk, BR KLASSIK). Heike Lies (Music Scientist, M.A., Musik and Musiktheater in the Cultural Department, Munich). Christian Böhnke-Geisse (Jazz and Music Consulting and Promotion). Beate Sampson, Moderator and Jazz Journalist with the Bayerischer Rundfunk, BR KLASSIK).

The last invited Jazz group will perform March 15th. The top two favorite trios will be invited back to compete in final on April 18, 2015. The winner will receive €10,000 and a unique trophy. Later that evening, the winner will perform at the BMV Auditorium at 7 P.M.

Ronald Bunn 6 years ago 38
Do NOT follow this link or you will be banned from the site!