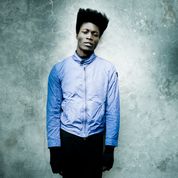 Following his UK debut on Later… with Jools Holland—the only unsigned artist to do so— Benjamin Clementine became the most shared artist on Spotify. Since then he’s had support slots with Cat Power, Tune-Yards and Woodkid, released two EPs, and sold-out headline shows at Lia Cigale in Paris, Paradiso in Amsterdam and London’s Purcell Rooms (five stars in the Standard), Koko and Emmanuel Centre. For the first time ever, he will bring his soulful performance to the U.S.

Now aged 25, Benjamin was raised in the London borough of Edmonton, growing up in a strict religious household. When he started to teach himself the keyboard aged 11, he was at first influenced by the sparse piano solos of Erik Satie. At 16 years old, in a rare moment of permitted TV watching, he caught Antony and the Johnsons performing ‘Hope There’s Someone’ on the BBC (“I was confused, scared…it was another world,” says Clementine. “When it finished, I went back upstairs to my piano and started playing chords”).

Inspired by Antony, and other figures including Leonard Cohen and Jake Thackray – and with no emotional or employment ties to keep him in London – Benjamin absconded to Paris at 20 years old; sleeping rough and busking on the metro out of economic necessity, building up a cult following in the process, before being signed to Universal via the independent label Behind. Benjamin’s debut album At Least For Nowwill be released in France and other European territories in mid-Janaury 2015, and in the UK in late March.